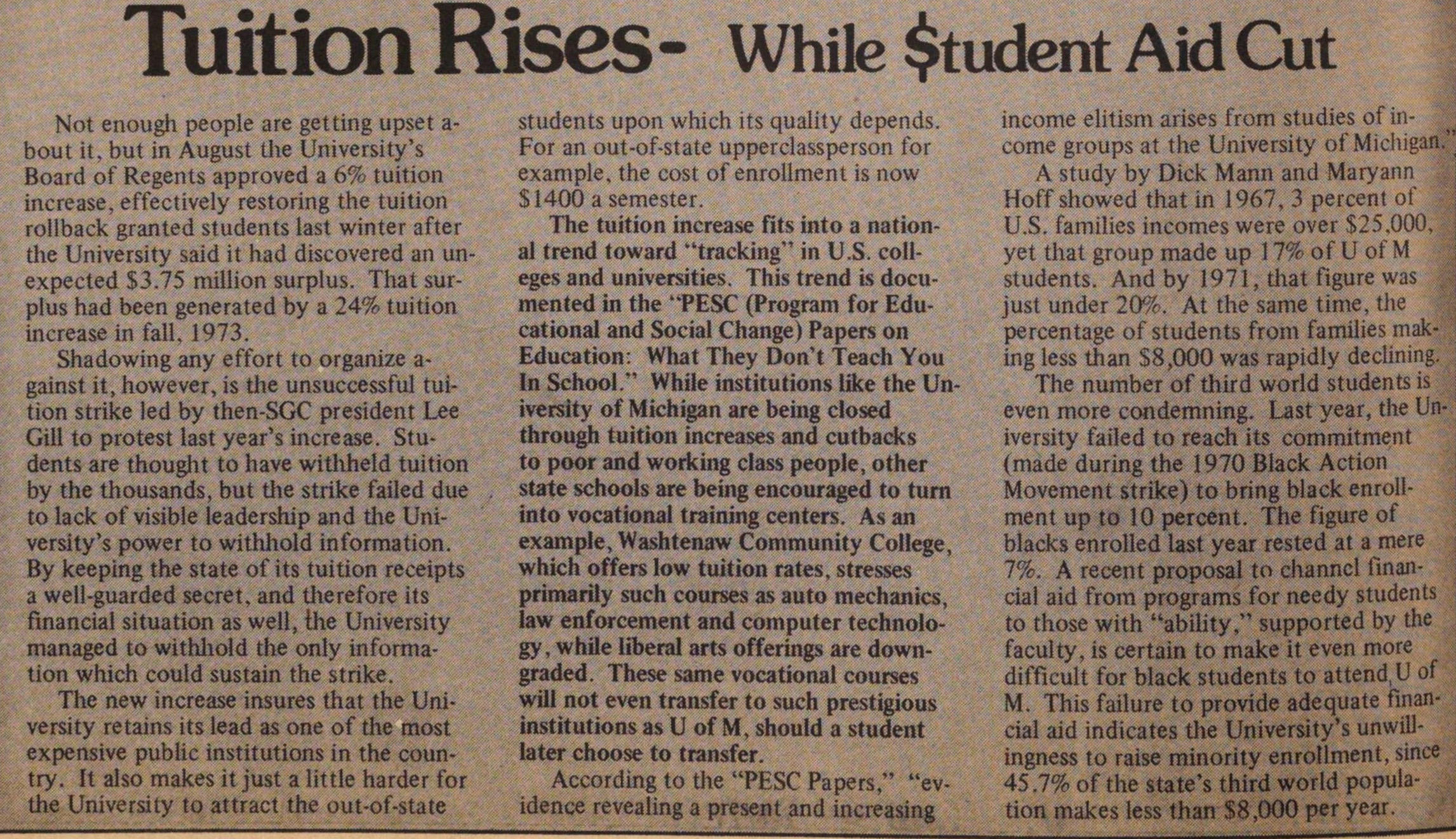 Not enough people are getting upset about it, but in August the University's Board of Regents approved a 6% tuition increase, effectively restoring the tuition rollback granted students last winter after the University said it had discovered an unexpected $3.75 million surplus. That surplus had been generated by a 24% tuition increase in fall, 1973. Shadowing any effort to organize against it, however, is the unsuccessful tuition strike led by then-SGC president Lee Gill to protest last year's increase. Students are thought to have withheld tuition by the thousands, but the strike failed due to lack of visible leadership and the University's power to withhold information. By keeping the state of its tuition receipts a well-guarded secret, and therefore its financial situation as well, the University managed to withhold the only information which could sustain the strike.

The new increase insures that the University retains its lead as one of the most expensive public institutions in the country. It also makes it just a little harder for the University to attract the out-of-state students upon which its quality depends. For an out-of-state upperclassperson for example, the cost of enrollment is now $1400 a semester.

The tuition increase fits into a national trend toward "tracking" in U.S. colleges and universities. This trend is documented in the "PESC (Program for Educational and Social Change) Papers on Education: What They Don't Teach You In School." While institutions like the University of Michigan are being closed through tuition increases and cutbacks to poor and working class people, other state schools are being encouraged to turn into vocational training centers. As an example, Washtenaw Community College, which offers low tuition rates, stresses primary such courses as auto mechanics, law enforcement and computer technology, while liberal arts offerings are downgraded. These same vocational courses will not even transfer to such prestigious institutions as U of M, should a student later choose to transfer.

According to the "PESC Papers," "evidence revealing a present and increasing income elitism arises from studies of income groups at the University of Michigan."

The number of third world students is even more condemning. Last year, the University failed to reach its commitment (made during the 1970 Black Action Movement strike) to bring black enrollment up to 10 percent. The figure of blacks enrolled last year rested at a mere 7%. A recent proposal to channel financial aid from programs for needy students to those with "ability," supported by the faculty, is certain to make it even more difficult for black students to attend U of M. This failure to provide adequate financial aid indicates the University's unwillingness to raise minority enrollment, since 45.7% of the state's third world population makes less than $8,000 per year.