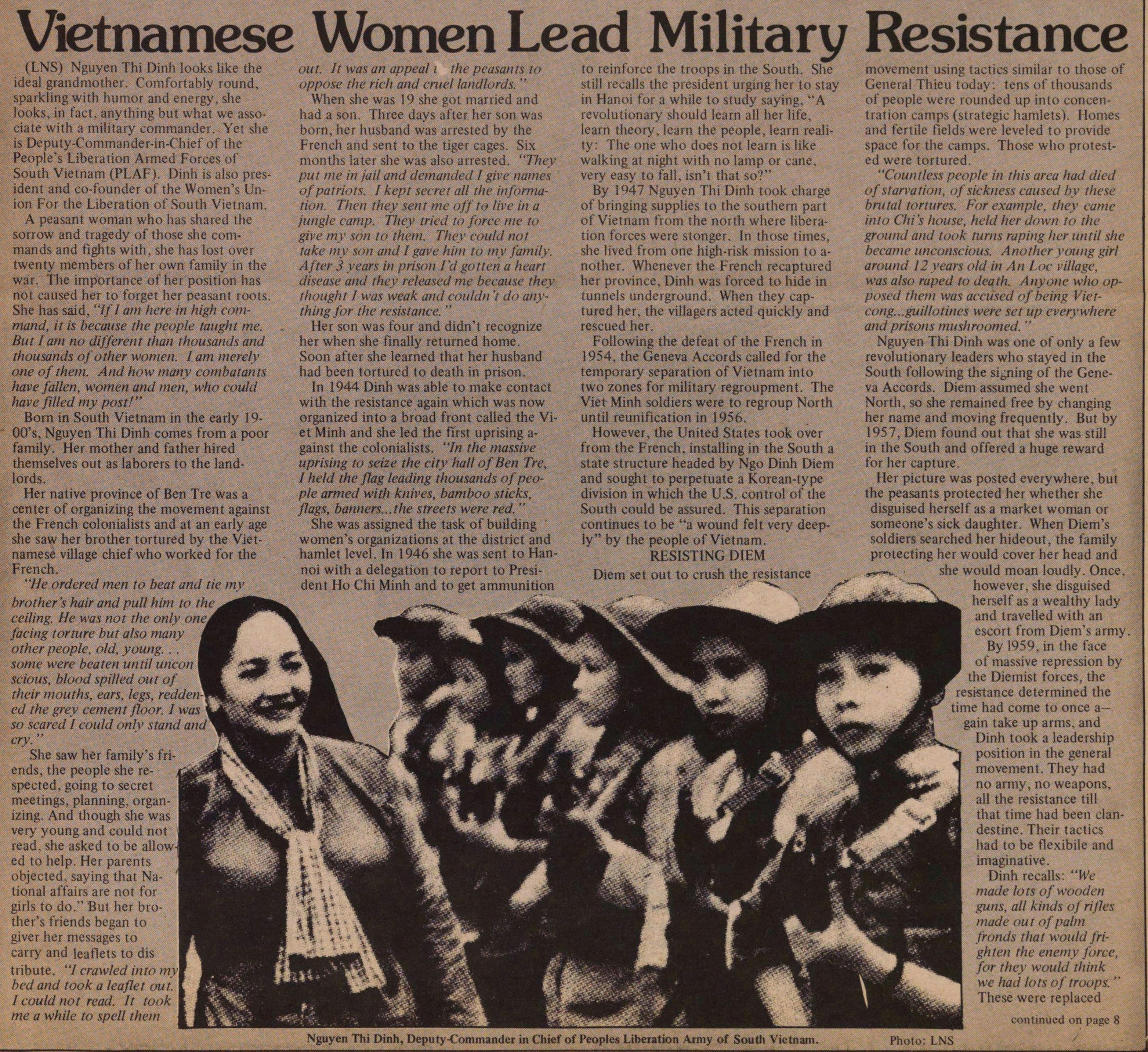 (LNS) Nguyen Thi Dinh looks like the ideal grandmother. Comfortably round, sparkling with humor and energy, she looks, in fact, anything but what we associate with a military commander. Yet she is Deputy-Commander-in-Chief of the People's Liberation Armed Forces of South Vietnam (PLAF). Dinh is also president and co-founder of the Women's Union For the Liberation of South Vietnam.

A peasant woman who has shared the sorrow and tragedy of those she commands and fights with, she has lost over twenty members of her own family in the war. The importance of her position has not caused her to forget her peasant roots. She has said, "If I am here in high command, it is because the people taught me. But I am no different than thousands and thousands of other women. I am merely one of them. And how man combatants have fallen, women and men, who could have filled my post!"

Born in South Vietnam in the early 1900's, Nguyen Thi Dinh comes from a poor family. Her mother and father hired themselves out as laborers to the landlords.

Her native province of Ben Tre was a center of organizing the movement against the French colonialists and at an early age she saw her brother tortured by the Vietnamese village chief who worked for the French.

"He ordered men to beat and tie my brother's hair and pull him to the ceiling. He was not the only one facing torture but also many other people old, young. . .some were beaten until unconscious, blood spilled out of their mouths, ears, legs, reddened the grey cement floor. I was so scared l could only stand and cry. "

She saw her family's friends, the people she respected, going to secret meetings, planning, organizing. And though she was very young and could not read, she asked to be allowed to help. Her parents objected, saying that National affairs are not for girls to do." But her brother's friends began to give her messages to carry and leaflets to distribute. "I crawled into my bed and took a leaflet out. I could not read. It took me a while to spell them out. ft was an appeal to the peasants to oppose the rich and cruel landlords."

When she was 19 she got married and had a son. Three days after her son was born, her husband was arrested by the French and sent to the tiger cages. Six months later she was also arrested. "They put me in jail and demanded I give names of patriots. I kept secret all the information. Then they sent me off to live in a jungle camp. They tried to force me to give my son to them. They could nol take my son and I gave him to my family. After 3 years in prison I'd gotten a heart disease and they released me because they thought I was weak and couldn't do anything for the resistance."

Her son was four and didn't recognize her when she finally returned home. Soon after she learned that her husband had been tortured to death in prison.

In 1944 Dinh was able to make contact with the resistance again which was now organized into a broad front called the Viet Minh and she led the first uprising against the colonialists. "In the massive uprising to seize the city hall of Ben Tre, l held the flag leading thousands of people armed with knives, bamboo sticks, flags, banners...the streets were red."

She was assigned the task of building women's organizations at the district and hamlet level. In 1946 she was sent to Hannoi with a delegation to report to President Ho Chi Minh and to get ammunition to reinforce the troops in the South. She still recalls the president urging her to stay in Hanoi for a while to study saying, "A revolutionary should learn all her life, learn theory, learn the people, learn reality: The one who does not learn is like walking at night with no lamp or cane, very easy to fall, isn't that so?"

By 1947 Nguyen Thi Dinh took charge of bringing supplies to the southern part of Vietnam from the north where liberation forces were stronger. In those times, she lived from one high-risk mission to another. Whenever the French recaptured her province, Dinh was forced to hide in tunnels underground. When they captured her, the villagers acted quickly and rescued her.

Following the defeat of the French in 1954, the Geneva Accords called for the temporary separation of the Vietnam into two zones for military regroupment. The Viet Minh soldiers were regroup North until reunification in 1956.

However, the United States took over from the French, installing in the South a state structure headed by Ngo Dinh Diem and sought to perpetuate a Korean-type division in which the U.S. control of the South could be assured. This separation continues to be "a wound felt very deeply" by the people of Vietnam.

Diem set out to crush the resistance movement using tactics similar to those of the General Thieu today: tens of thousands of people were rounded up into concentration camps (strategic hamlets). Homes and fertile fields were leveled to provide space for the camps. Those who protested were tortured.

"Countless people in this area had died of starvation, of sickness caused by these brutal tortures. For example, they came into Chi's house, held her down to the ground and took turns raping her until she became unconscious. Another young girl around 12 years old in An Loc village, was also raped to death. Anyone who opposed them was accused of being Vietcong...guillotines were set up everywhere and prisons mushroomed."

Nguyen Thi Dinh was one of only a few revolutionary leaders who stayed in the South following the signing of the Geneva Accords. Diem assumed she went North, so she remained free by changing her name and moving frequently. But by 1957, Diem found out that she was still in the South and offered a huge reward for her capture.

By 1959, in the face of massive repression by the Diemist forces, the resistance determined the time had come to once again take up arms, and Dinh took a leadership position in the general movement. They had no army, no weapons, all the resistance till the time had been clandestine. Their tactics had to be flexible and imaginative.

Dinh recalls: "We made lots of Wooden guns, all kinds of rifles made out of palm fronds that frighten the enemy force we had lots of troops." These were replaced as they captured real weapons from the enemy.

This insurrection which began in Ben Tre province drove 13,000 diem troops out of the province and became a model for national liberation strategy: Careful political work done amount the people for months prior to any military action, propaganda and agitation within enemy ranks, combined with armed struggle.

Part of Dinh's major responsibility now is training and organizing the backbone of the political struggle-the army of women known as the Long Haired Army.

The work of these women is decisive and very dangerous. It involves carrying out political propaganda work in cities under the noses of the enemy. It means going onto enemy bases disguised as a laundress or fish monger, carefully calculating the layout, strengths and weakness of the post. Then, at night, blowing it up.

It means serving as secretaries and servants to top officers to Thieu's army, and relaying information to the Liberation Army, or planting explosives in the meeting rooms of the top brass Saigon.

It means approaching Saigon soldiers at night and talking tot he from outside the bases, bringing news of life in the liberated zone, messages from their families, describing land distribution and the plot that has been set aside for them. The tens of thousands of soldiers who deserted each month during the 1972 offensive were to a large extent responding to these brave women.

As president of the Union of Women for the Liberation of South Vietnam, Dinh notes:

"Our movement symbolizes the strength of the women's movement against imperialism in the present period...