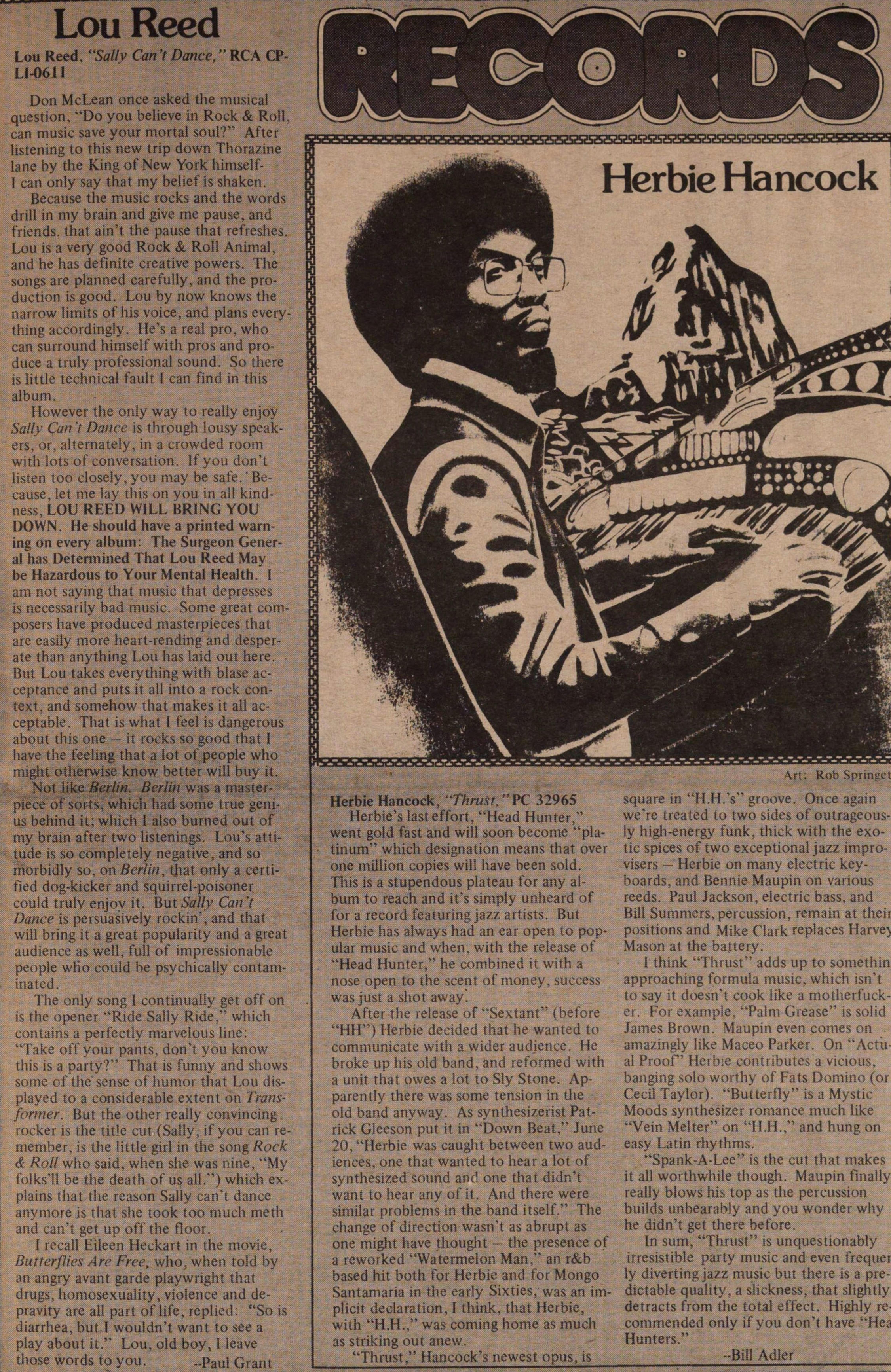 Don McLean once asked the musical question. "Do you believe in Rock & Roll, can music save your mortal soul?" After listening to this new trip down Thorazine lane by the King of New York himself I can only say that my belief is shaken.

Because the music rocks and the words drill in my brain and give me pause, and friends. that ain't the pause that refreshes. Lou is a very good Rock & Roll Animal, and he has definite creative powers. The songs are planned carefully, and the production is good. Lou by now knows the narrow limits of his voice, and plans everything accordingly. He's a real pro, who can surround himself with pros and produce a truly professional sound. So there is little technical fault I can find in this album.

However the only way to really enjoy Sally Can't Dance is through lousy speakers, or, alternately, in a crowded room with lots of conversation. If you don't listen too closely, you may be safe. Because, let me lay this on you in all kindness, LOU REED WILL BRING YOU DOWN. He should have a printed warning on every album: The Surgeon General has Determined That Lou Reed May be Hazardous to Your Mental Health. I am not saying that music that depresses is necessarily bad music. Some great composers have produced masterpieces that are easily more heart-rending and desperate than anything Lou has laid out here. But Lou takes everything with blase acceptance and puts it all into a rock context, and somehow that makes it all acceptable. That is what I feel is dangerous about this one - it rocks so good that I have the feeling that a lot of. people who might otherwise know better will buy it.

Not like Berlin, Berlin was a masterpiece of sorts, which had some true genius behind it; which I also burned out of my brain after two listenings. Lou's attitude is so completely negative, and so morbidly so, on Berlin, that only a certified dog-kicker and squirrel-poisoner could truly enjoy it. But Sally Can't Dance is persuasively rockin', and that will bring it a great popularity and a great audience as well, full of impressionable people who could be psychically contaminated.

The only song I continually get off on is the opener "Ride Sally Ride," which contains a perfectly marvelous line: "Take off your pants, don't you know this is a party?" That is funny and shows some of the sense of humor that Lou displayed to a considerable extent on Transformer. But the other really convincing rocker is the title cut (Sally, if you can remember, is the little girl in the song Rock & Roll who said, when she was nine, ''My folks'll be the death of us all.") which explains that the reason Sally can't dance anymore is that she took too much meth and can't get up off the floor.

I recall Eileen Heckart in the movie, Butterflies Are Free, who, when told by an angry avant garde playwright that drugs, homosexuality, violence and depravity are all part of life, replied: "So is diarrhea, but I wouldn't want to see a play about it.'' Lou, old boy, I leave those words to you.