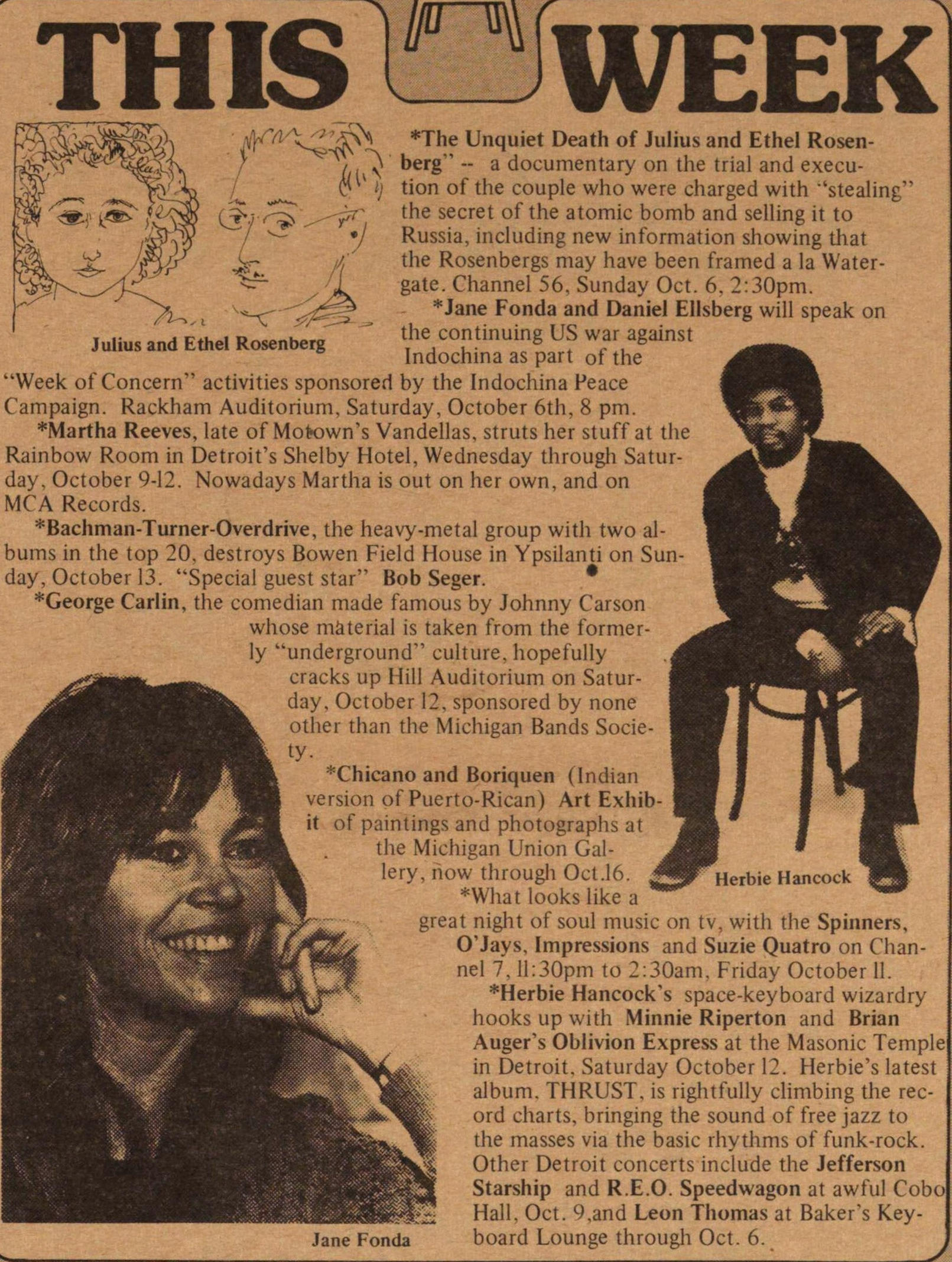 The Unquiet Death of Julius and Ethel Rosenberg" -- a documentary on the trial and execution of the couple who were charged with 'stealing" the secret of the atomic bomb and selling it to Russia, including new information showing that the Rosenbergs may have been framed a la Watergate. Channel 56, Sunday Oct. 6. 2:30pm. Jane Fonda and Daniel Ellsberg will speak on the continuing US war against Indochina as part of the "Week of Concern" activities sponsored by the Indochina Peace Campaign. Rackham Auditorium, Saturday, October 6th, 8 pm. Martha Reeves, late of Motown's Vandellas, struts her stuff at the Rainbow Room in Detroit's Shelby Hotel, Wednesday througli Saturday. October 9-12. Nowadays Martha is out on her own, and on MCA Records. Bachman-Turner-Overdrive, the heavy-metal group with two albums in the top 20. destroys Bowen Field House in Ypsilanti on Sunday, October 13. "Special guest star" Bob Seger. George Carlin, the comedian made famous by Johnny Carson whose material is taken from the formerly "underground" culture, hopefully cracks up Hill Auditorium on day, October 12. sponsored by none other than the Michigan Bands Society- l Chicano and Buriquen (Indian version of Puerto-Rican) Art Exhibit of paintings and photographs at the Michigan Union Galk lery, ñow through Oct.16. # What looks like a great niglit of soul music on tv, with the Spinners, O'Jays, Impressions and Suzie Quatro on Channel 7, ll:30pm to 2:30am. Friday October 11. Herbie Hancock's space-keyboard wizardry hooks up with Minnie Riperton and Brian Auger's Oblivion Express at the Masonic Temple in Detroit. Saturday October 12. Herbie's latest album. THRUST. is riglitfully climbing the recfe ord charts, bringing the sound of free jazz to K the masses via the basic rhythms of funk-rock. Other Detroit concerts include the Jefferson Starship and R.E.O. Speedwagon at awful Cobo Hall. Oct. 9, and Leon Thomas at Baker's Keyboard Lounge through Oct. 6. ,