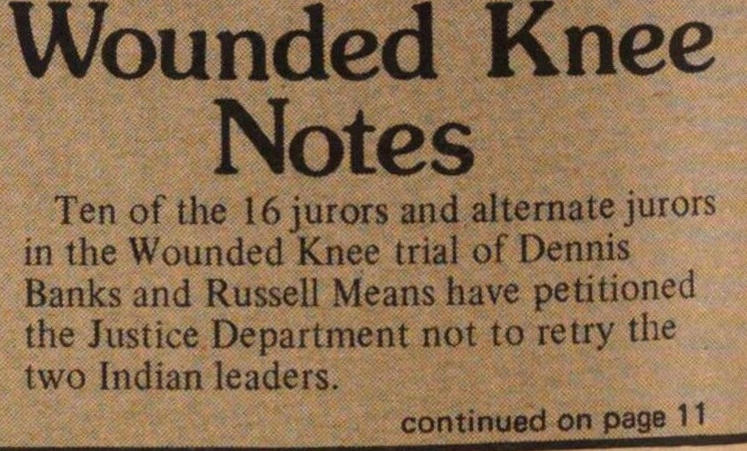 Ten of the 16 jurors and alternate jurors in the Wounded Knee trial of Dennis Banks and Russell Means have petitioned the Justice Department not to retry the two Indian leaders.

The 10 signed a letter to Attorney General William Saxbe urging the dismissal of all future Wounded Knee charges against Banks and Means, and against approximately 90 other defendants who have yet to stand trial.

In the wake of the Wounded Knee dismissal Attorney General William Saxbe has ordered a study of all "political trials" in an effort to find out what federal prosecutors are doing wrong.

Saxbe admitted that the Wounded Knee case was just the latest in a long series of political cases in which the government was embarrassed by disclosures during the trial, then lost the verdict.

Recent so-called "political trials" which the government has lost, other than Wounded Knee, include the Pentagon Papers case; the Harrisburg conspiracy trial; the Camden 28 draft board raid trial; the Gainesville Eight case; the Seattle Seven case; and the "Chicago Eight" conspiracy trial.

Dick Wilson, Oglala Sioux President and arch foe of the American Indian Movement, said he was outraged by the Wounded Knee trial decision which freed Dennis Banks and Russell Means.

Said Wilson: "Because of the climate set by President Ford's pardon of Richard M. Nixon, there's been a total breakdown of the judicial system. If we want law and order, we will have to take it into our own hands."