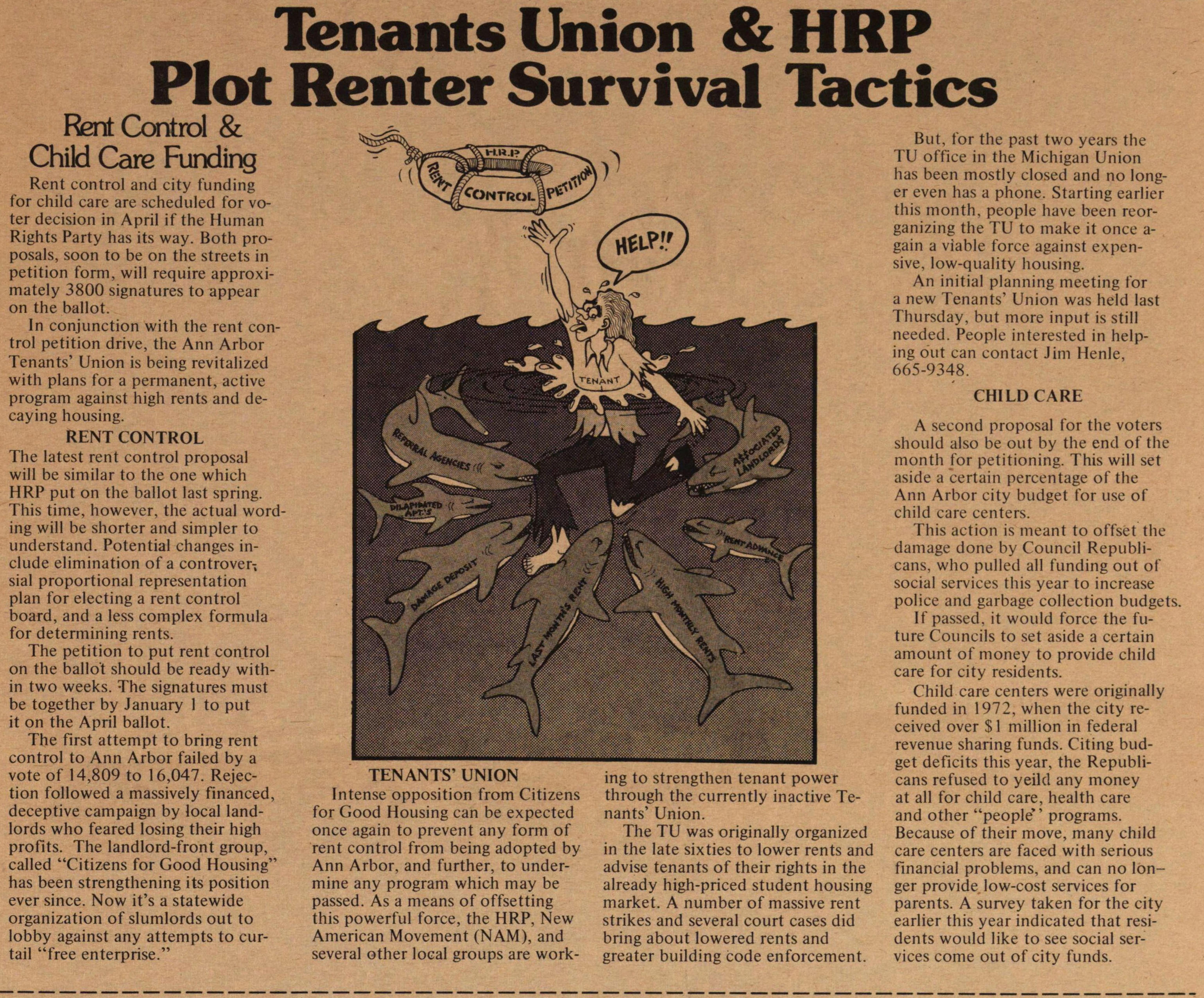 Rent control and city funding for child care are scheduled for voter decisión in April if the Human Rights Party has its way. Both proposals, soon to be on the streets in petition form, will require approximately 3800 signatures to appear on the ballot. In conjunction with the rent control petition drive, the Ann Arbor Tenants' Union is being revitalized with plans for a permanent, active program against high rents and decaying housing. RENT CONTROL The latest rent control proposal will be similar to the one which HRP put on the ballot last spring. This time, however, the actual wording will be shorter and simpler to understand. Potential changes include elimination of a controver-, sial proportional representation plan for electing a rent control board, and a less complex formula for determining rents. The petition to put rent control on the ballot should be ready within two weeks. The signatures must be together by January 1 to put it on the April ballot. The first attempt to bring rent control to Ann Arbor failed by a vote of 14,809 to 16,047. Rejection followed a massively financed, deceptive campaign by local landlords who feared losing their high profits. The landlord-front group, called "Citizens for Good Housing" has been strengthening its position ever since. Now it's a statewide organization of slumlords out to lobby against any attempts to curtail "free enterprise." TENANTS' UNION Intense opposition from Citizens for Good Housing can be expected once again to prevent any form of rent control from being adopted by Ann Arbor, and further, to undermine any program which may be passed. As a means of offsetting this powerful force, the HRP, New American Movement (NAM), and several other local groups are ing to strengthen tenant power through the currently inactive Tenants' Union. The TU was originally organized in the late sixties to lower rents and advise tenants of their rights in the already high-priced student housing market. A number of massive rent strikes and several court cases did bring about lowered rents and greater building code enforcement. But, for the past two years the TU office in the Michigan Union has been mostly closed and no longer even has a phone. Starting earlier this month, people have been reorganizing the TU to make it once again a viable forcé against expensive, low-quality housing. An initial planning meeting for a new Tenants' Union was held last Thursday, but more input is still needed. People interested in helping out can contact Jim Henle, 665-9348. CHILDCARE A second proposal for the voters should also be out by the end of the month for petitioning. This will set aside a certain percentage of the Ann Arbor city budget for use of child care centers. This action is meant to offset the damage done by Council Republicans, who pulled all funding out of social services this year to increase pólice and garbage collection budgets. If passed, it would force the future Councils to set aside a certain amount of money to provide child care for city residents. Child care centers were originally funded in 1972, when the city received over $1 million in federal revenue sharing funds. Citing budget déficits this year, the Republicans refused to yeild any money at all for child care, health care and other "people" programs. Because of their move, many child care centers are faced with serious financial problems, and can no longer provide low-cost services for parents. A survey taken for the city earlier this year indicated that residents would Iike to see social services come out of city funds.