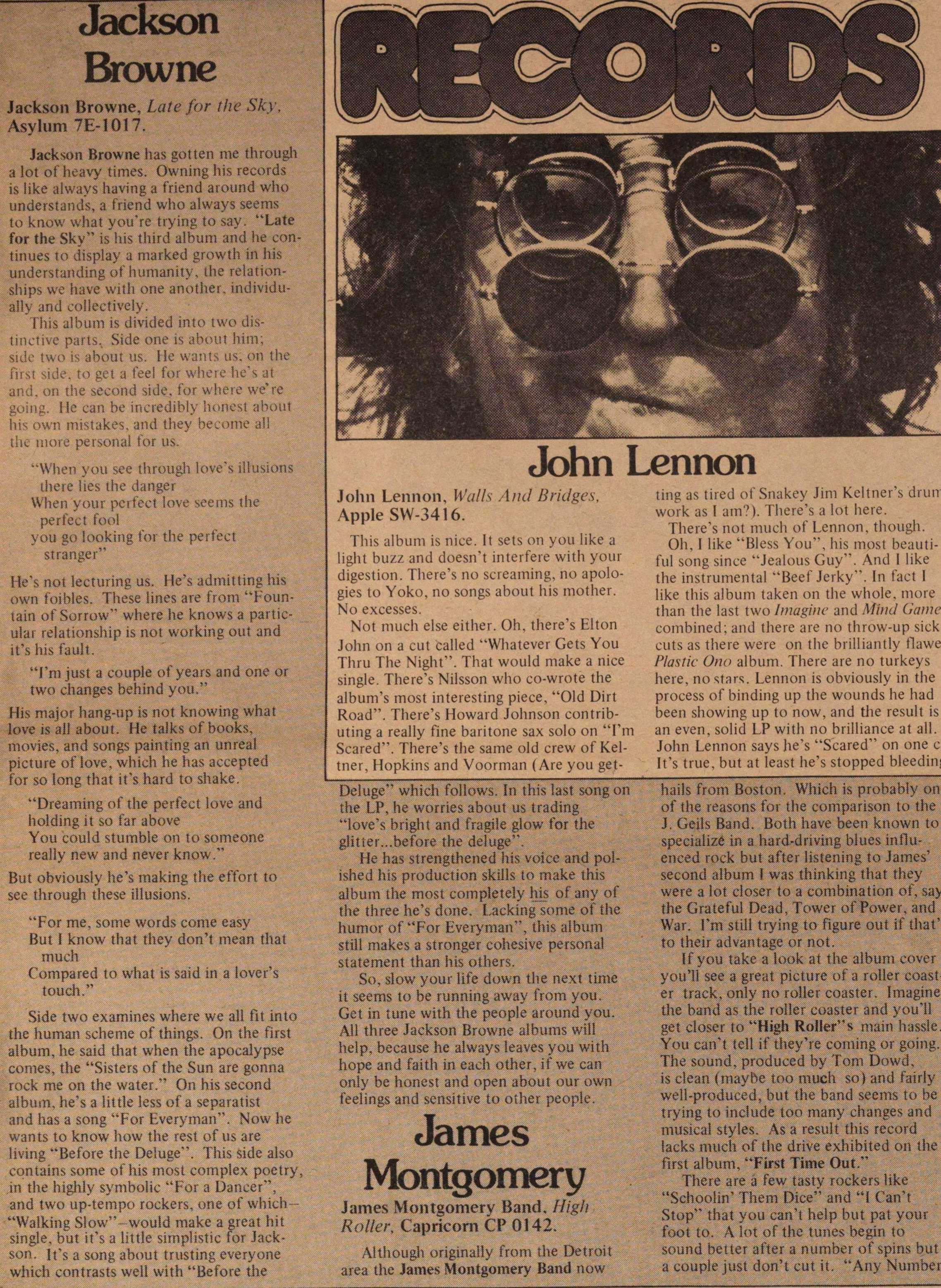 Jackson Browne, Late for the Sky, Asyhim7E-1017. Jackson Browne has gotten me through a lot of heavy times. Owning his records is like always having a friend around who understands, a friend who always seems to know what you're trying to ay. "Late for the Sky" is his third album and he continúes to display a marked growth in his understanding of humanity, ihe relationships we have wilh one anothei. ndividually and collectively. This album is divided into two disünctive parts. Side one is about him; side two is about us. lle wants us; on the first side. to get a teel for where he's ai and. on the second side. for wbere we re going. lie can be incredibty honcsi about ah mistakes. and they becorrie all the more personal lor us. "When you see througli love's ilhisions there lies the danger When your perfect love seems the perfect fooi you go looking for the perfect stranger" He's not lecturing us. He's admitling his own foibles. These lines are from "Fountain of Sorrow" where he knows a particular relationship is not working out and u's his fa uit. 'Tm just a couple of years and one or two changes behind you." His major hang-up is not knowing what love is all about. He talks of books, movies, and songs painting an unreal picture of love, whieh he has accepted for so long that it's hard to shake. "Dreaming of the perfect love and holding it so far above You could stumble on to someone really new and never know." But obviously he's making the effort to see through these illusions. "For me, some words come easy But I know that they don't mean that much Compared to what is said in a lover's touch." Side two examines where we all fit into the human seheme of things. On the first album, he said that when the apocalypse comes, the "Sisters of the Sun are gonna rock me on the water." On his second album, he's a little less of a separatist and has a song "For Everyman". Now he wants to know how the rest of us are living "Before the Deluge". This side also contains some of his most complex poetry, in the higlily symbolic "For a Daneer", and two up-tempo rockers, one of which- "Walking would make a great hit single, but it's a little simpltstic for Jackson. It's a song about trusting everyone which contrasts well with "Before the Deluge" which follows. In this last song on the LP, he worries about us trading "love's bright and fragüe glow for the glitter. ..before the deluge'". He has strengthened his voice and polished his production skills io make this album the most completely his of any of the three he's done. Lacking some of the humor of "For Everyman", this album still makes a stronger cohesive personal statement than his others. So, slow your life down the next time it seems to be running away from you. Get in tune with the people around you. All three Jackson Browne albums will help, because he always leaves you with hope and faith in each other, if we can only be honest and open about our own feelings and sensitive to oiher people.