What To Do When You Wake Up With... 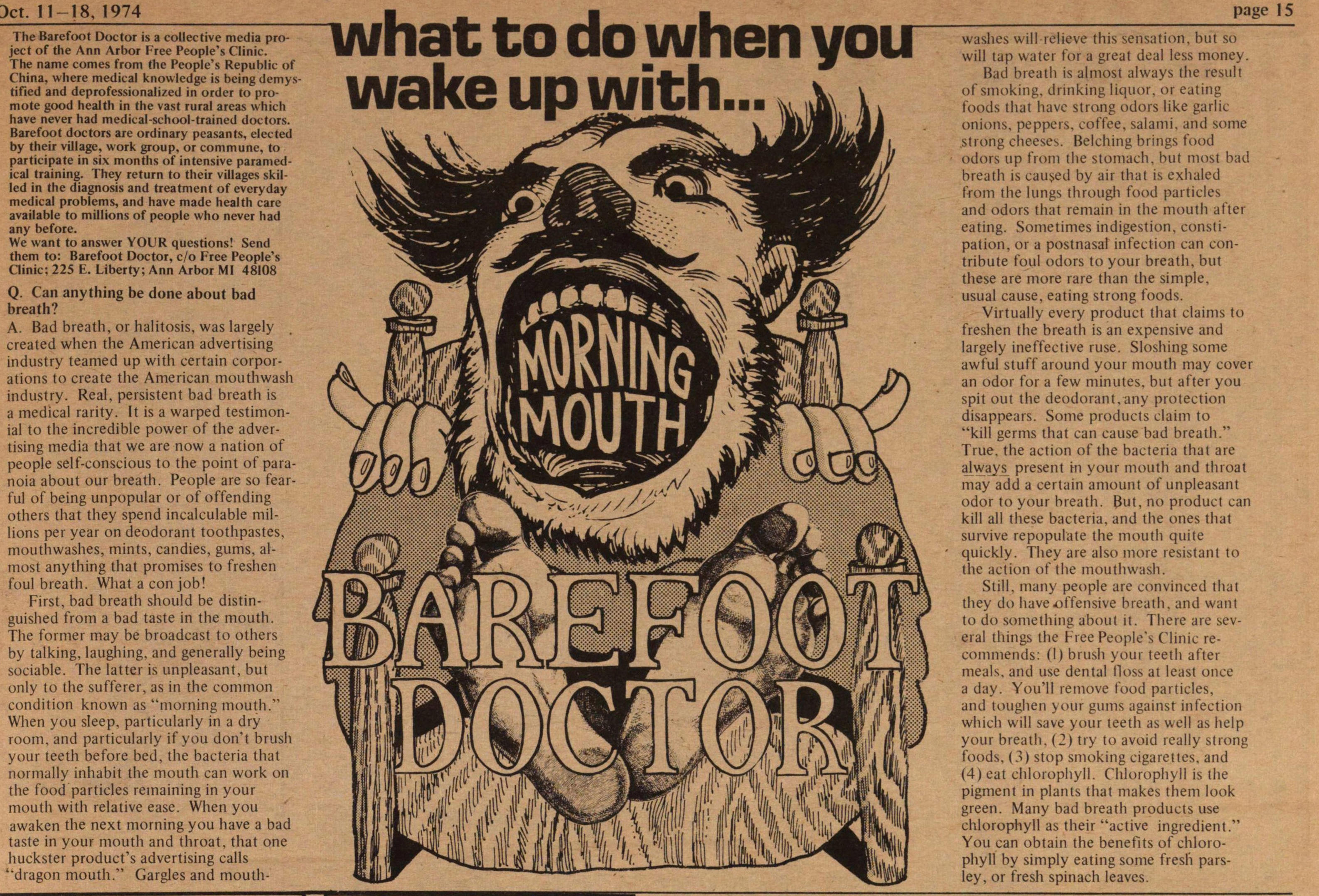 The Barefoot Doctor is a collective media project of the Ann Arbor F'ree People's Clinic. The name comes from the People's Republic of China, where medical knowledge is being demystified and deprofessionalized in order to promote good health in the vast rural áreas which have never had medical-school-trained doctors. Barefoot doctors are ordinary peasants, elccted by their village, work group, or commune, to particípate in six months of intensive paramedii al training. They return to their villages skilled in the diagnosis and treatment of everyday medical problems, and have made health care available to millions of people who never had any before. We want to answer YOUR questions! Send them to: Barefoot Doctor, co Free People's Clinic: 225 1% Liberty; Ann Arbor Ml 48108 Q. Can anything be done about bad breath? A. Bad breath, or halitosis, was largely created when the American advertising industry teamed up with certain corporations to créate the American mouthwash industry. Real, persistent bad breatli is a medical rarity. It is a warped testimonial to the incredible power of the advertising media that we are now a nation of people self-conscious to the point of paranoia about our breath. People are so fearful of being unpopular or of offending others that they spend incalculable millions per year on deodorant toothpastes, mouthwashes, mints, candies, gums, alrnost anything that promises to freshen foul breath. What a con job! First, bad breath should be distinguished from a bad taste in the mouth. The former may be broadcast to others by talking, laughing. and generally being sociable. The latter is unpleasant, but only to the sufferer, as in the common condition known as "morning mouth." When you sleep, particularly in a dry room, and particularly if you don't brush your teeth before bed, the bacteria that normally inhabit the mouth can work on the food particles remaining in your mouth with relative ease. When you awaken the next morning you have a bad taste in your mouth and throat, that one huckster product's advertising calis '"dragon mouth." Gargles and waslies will relieve this sensation, hut so will tap water tor a great deal less money. Had breath is almost always the result of smoking, drinking liquor, 01 eating foods tliat have strong odors like garlic onions, peppers, coffee, salami, and some strong cheeses. Belching brings food odors up from the stomach, bul mosl bad breath is caused by air iliat is exhaled lïom ilie hings tlirougli food particles and odors tliat remain in the mouth after eating. Sometimes indigestión, constipation, or a postnasal infection can contribute fqul odors to your breath. bul these are more rare than the simple, usual cause, eating strong foods. Virtually every product that claims to freshen the breath is an expensive and largely ineffective ruse. Sloshing some awful stuff around your mouth may cover an odor for a few minutes, but after you spit out the deodorant.any proteetion disappears. Some producís claim to "kill gemis that can cause bad breath." True. the action of the bacteria that are always present m your mouth and throat may add a certain amounl of unpleasant odor to your hreath. (Jut, no product can kill all these bacteria, and the ones thal survive repopulate the mouth quite quickly. They are also more resistanl to the action of the mouthwash. Still. many people are convinced that they do have offensive breath. and want to do something about it. There are several t hings the FreePeople's ('linie recommends: (I) brush your teeth after meáis, and use dental floss at least once a day. You'll remove food particles, and toughen youf gums against infection which will save your teeth as uell as help your breath. (2) try to avoid really strong foods, ( 3 ) stop smoking cigarettes. and (4)eat chlorophyll. Chlorophyll is the pigment in plants that makes t'hem look green. Many bad breath products use chlorophyll as their "'active ingrediënt." You can obtain the benefits of chlorophyll by simply eating some fresh parsley, or fresh spinach leaves.