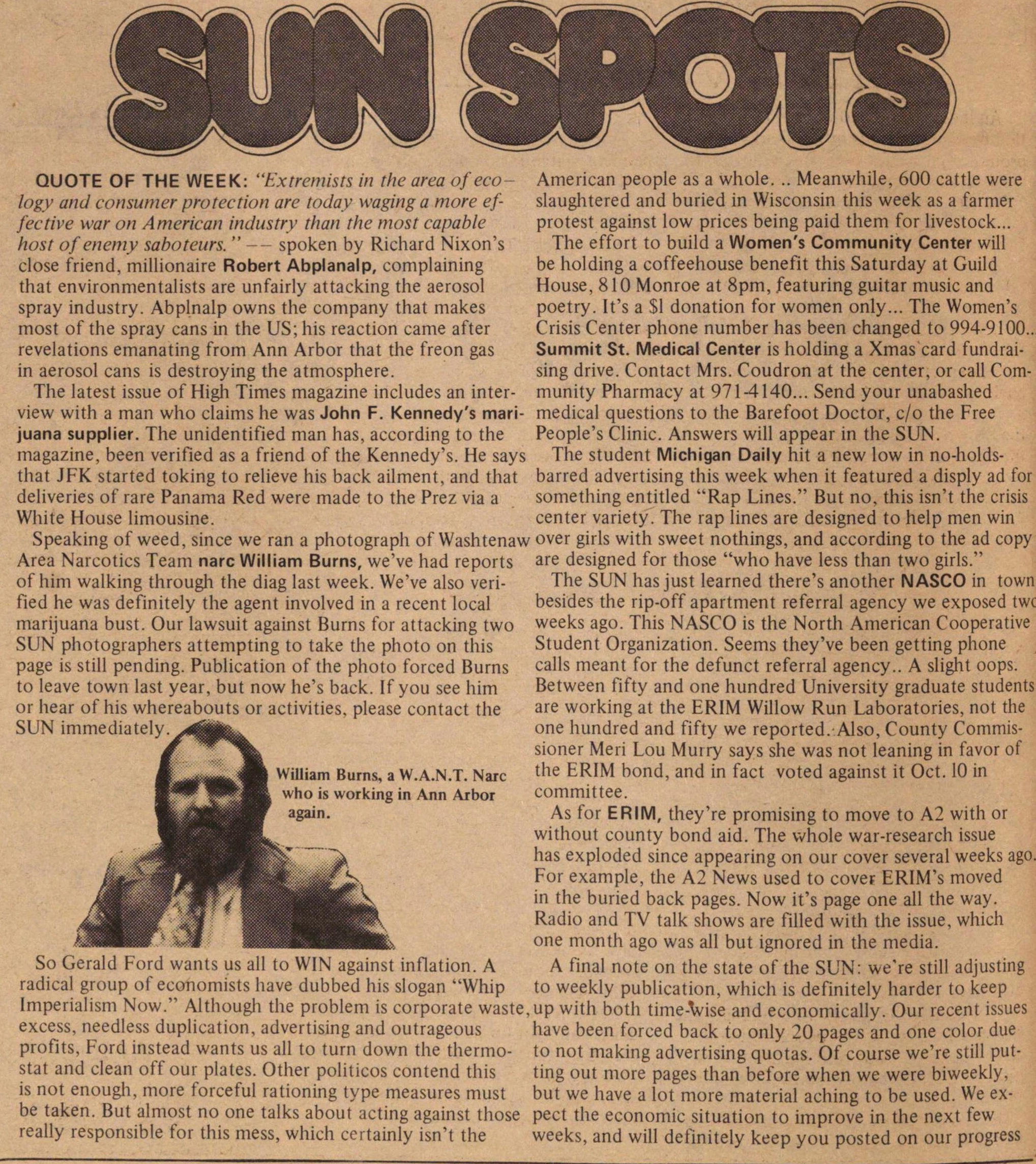 QUOTE OF THE WEEK: "Extremists in the area of ecology and consumer protection are today waging a more effective war on American industry than the most capable host of enemy saboteurs." -- spoken by Richard Nixon's close friend, millionaire Robert Abplanalp, complaining that environmentalists are unfairly attacking the aerosol spray industry. Abplanalp owns the company that makes most of the spray cans in the US; his reaction came after revelations emanating from Ann Arbor that the freon gas in aerosol cans is destroying the atmosphere.

The latest issue of High Times magazine includes an interview with a man who claims he was John F. Kennedy's marijuana supplier. The unidentified man has, according to the magazine, been verified as a friend of the Kennedy's. He says that JFK started toking to relieve his back ailment, and that deliveries of rare Panama Red were made to the Prez via a White House limousine.

Speaking of weed, since we ran a photograph of Washtenaw Area Narcotics Team narc William Burns, we've had reports of him walking through the diag last week. We've also verified he was definitely the agent involved in a recent local marijuana bust. Our lawsuit against Burns for attacking two SUN photographers attempting to take the photo on this page is still pending. Publication of the photo forced Burns to leave town last year, but now he's back. If you see him or hear of his whereabouts or activities, please contact the SUN immediately.

So Gerald Ford wants us all to WIN against inflation. A radical group of economists have dubbed his slogan "Whip Imperialism Now." Although the problem is corporate waste excess, needless duplication, advertising and outrageous profits, Ford instead wants us all to turn down the thermostat and clean off our plates. Other politicos contend this is not enough, more forceful rationing type measures must be taken. But almost no one talks about acting against those really responsible for this mess, which certainly isn't the American people as a whole... Meanwhile, 600 cattle were slaughtered and buried in Wisconsin this week as a farmer protest against low prices being paid them for livestock...

The effort to build a Women's Community Center will be holding a coffeehouse benefit this Saturday at Guild House, 810 Monroe at 8pm, featuring guitar music and poetry. It's a $1 donation for women only... The Women's Crisis Center phone number has been changed to 994-9100... Summit St. Medical Center is holding a Xmas card fundraising drive. Contact Mrs. Coudron at the center, or call Community Pharmacy at 971-4140... Send your unabashed medical questions to the Barefoot Doctor, c/o the Free People's Clinic. Answers will appear in the SUN.

The student Michigan Daily hit a new low in no-holds-barred advertising this week when it featured a disply ad for something entitled "Rap Lines." But no, this isn't the crisis center variety. The rap lines are designed to help men win over girls with sweet nothings, and according to the ad copy are designed for those "who have less than two girls."

The SUN has just learned there's another NASCO in town besides the rip-off apartment referral agency we exposed two weeks ago. This NASCO is the North American Cooperative Student Organization. Seems they've been getting phone calls meant for the defunct referral agency… A slight oops. Between fifty and one hundred University graduate students are working at the ERIM Willow Run Laboratories, not the one hundred and fifty we reported. Also, County Commissioner Meri Lou Murry says she was not leaning in favor of the ERIM bond, and in fact voted against it Oct. 10 in committee.

As for ERIM, they're promising to move to A2 with or without county bond aid. The whole war-research issue has exploded since appearing on our cover several weeks ago. For example, the A2 News used to cover ERIM's moved in the buried back pages. Now it's page one all the way. Radio and TV talk shows are filled with the issue, which one month ago was all but ignored in the media.

A final note on the state of the SUN: we're still adjusting to weekly publication, which is definitely harder to keep up with both time-wise and economically. Our recent issues have been forced back to only 20 pages and one color due to not making advertising quotas. Of course, we're still putting out more pages than before when we were biweekly, but we have a lot more material aching to be used. We expect the economic situation to improve in the next few weeks, and will definitely keep you posted on our progress