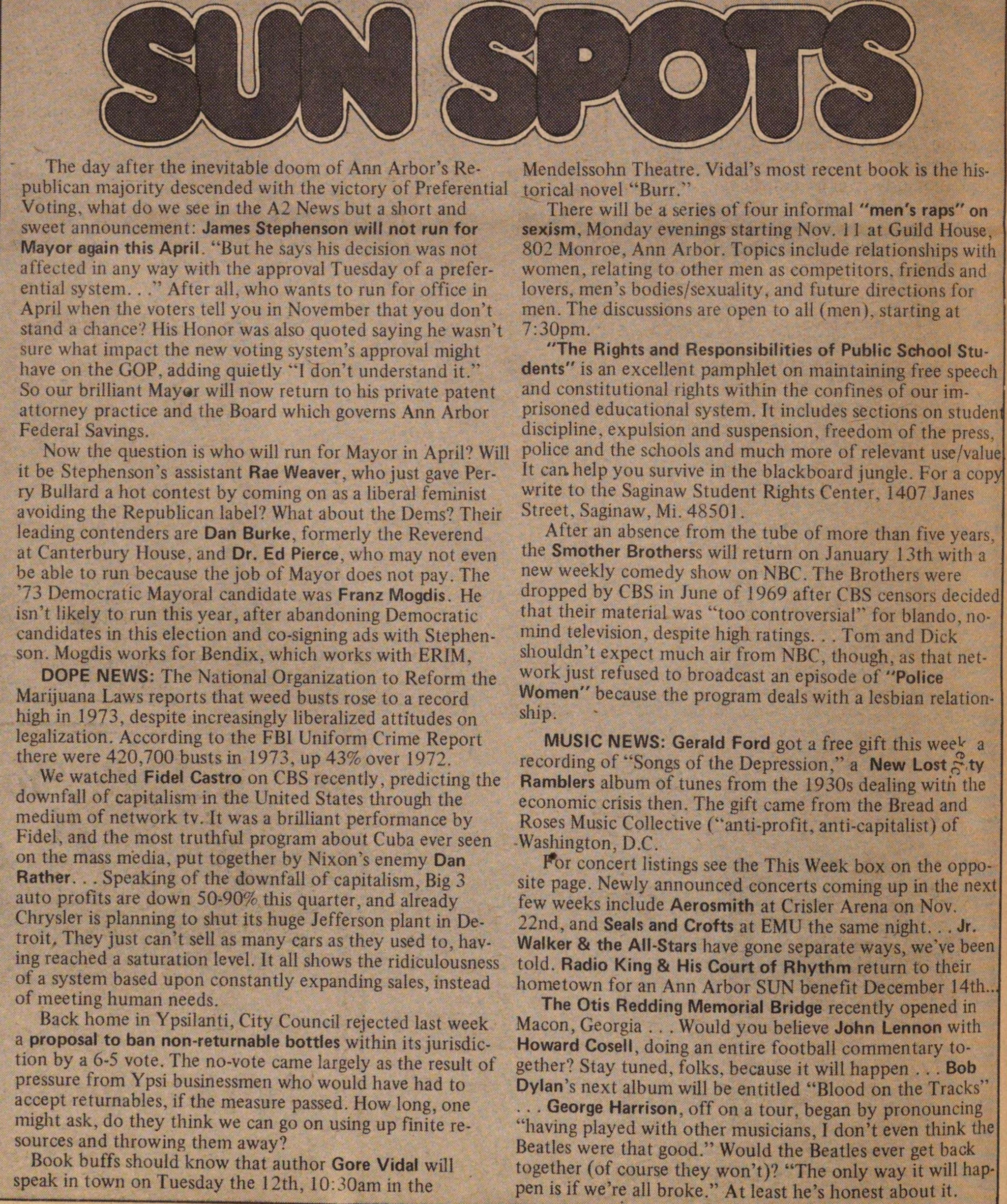 The day af ter the inevitable doom of Ann Arbor's Republican majority descended with the victory of Preferential Voting, what do we see in the A2 News but a short and sweet announcement: James Stephenson will not run for Mayor again this April. "But he says his decisión was not affected in any way with the approval Tuesday of a preferential system. . ." After all, who wants to run for office in April when the voters teil you in November that you don't stand a chance? His Honor was also quoted saying he wasn't sure what impact the new voting system's approval might have on the GOP, adding quietly "I don't understand it." So our brilliant Mayar will now return to his private patent attorney practice and the Board which governs Ann Arbor Federal Savings. Now the question is who will run for Mayor in April? Will it be Stephenson 's assistant Rae Weaver. who just gave Perry Bullard a hot contest by coming on as a liberal feminist avoiding the Republican label? What about the Dems? Their leading contenders are Dan Burke, formerly the Reverend at Canterbury House, and Dr. Ed Pierce. who may not even be able to run because the job of Mayor does not pay. The '73 Democratie Mayoral candidate was Franz Mogdis. He isn't likely to run this year, after abandoning Democratie candidates in this election and co-signing ads with Stephenson. Mogdis works for Bendix, which works with ERIM, DOPE NEWS: The National Organization to Reform the Marijuana Laws reports that weed busts rose to a record high in 1973, despite increasingly liberalized attitudes on legalization. According to the FBI Uniform Crime Report there were 420,700 busts in 1973, up 43% over 1972. We watched Fidel Castro on CBS recently, predicting the downfall of capitalism in the United States through the medium of network tv. It was a brilliant performance by Fidel, and the most truthful program about Cuba ever seen on the mass media, put together by Nixon's enemy Dan Rather. . . Speaking of the downfall of capitalism, Big 3 auto profits are down 50-90% this quarter, and already Chrysler is planning to shut its huge Jefferson plant in Detroit, They just can't sell as many cars as they used to, having reached a saturation level. It all shows the ridiculousness of a system based upon constantly expanding sales, instead of meeting human needs. Back home in Ypsilanti, City Council rejected last week a proposal to ban non-returnable bottles within its jurisdiction by a 6-5 vote. The no-vote carne largely as the result of pressure from Ypsi businessmen who would have had to accept returnables, if the measure passed. How long, one might ask, do they think we can go on using up fïnite resources and throwing them away? Book buffs should know that author Gore Vidal will speak in town on Tuesday the 12th, 10:30am in the Mendelssohn Theatre. Vidal's most recent book is the historical novel "Burr." There will be a series of four informal "men's raps" on sexism, Monday evenings starting Nov. 1 1 at Guild House, 802 Monroe, Ann Arbor. Topics include relationships with women, relating to other men as competitors. friends and lovers, men's bodiessexuality. and future directions for men. The discussions are open to all (men), starting at 7:3üpm. "The Rights and Responsibtlities of Public School Students" is an excellent pamphlet on maintaining free speech and constitutional riglits within the confines of our imprisoned educational system. ft includes sections on stilden discipline, expulsión and suspensión, freedom of the press, pólice and the schools and much more of relevant usevalue It can. help you survive in the blackboard jungle. For a copy write to the Saginaw Student Rights Center. 1407 Janes Street, Saginaw, Mi. 48501 . After an absence from the tube of more than five years. the Smother Brotherss will return on January 1 3th with a new weekly comedy show on NBC. The Brothers were dropped by CBS in June of 1969 after CBS censors decided that their material was "too controversial" for blando, nomind televisión, despite high ratings. . . Torn and Dick shouldn't expect much air from NBC, though, as that network just refused to broadcast an episode of "Pólice Women" because the program deals with a lesbian relationship. MUSIC NEWS: Gerald Ford got a free gift this wee a recording of "Songs of the Depression," a New Lost ty Ramblers album of tunes from the 1930s dealing with the economie crisis then. The gift came from the Bread and Roses Music Collective ("anti-profit, anti-capitalist) of -Washington, D.C. Ibr concert listings see the This Week box on the opposite page. Newly announced concerts coming up in the next few weeks include Aerosmith at Crisler Arena on Nov. 22nd, and Seals and Crofts at EMU the same night. . . Jr. Walker & the All-Stars have gone separate ways, we've been told. Radio King & His Court of Rhythm return to their hometown for an Ann Arbor SUN benefit December 14th.. The Otis Redding Memorial Bridge recently opened in Macón, Georgia . . . Would you believe John Lennon with Howard Cosell, doing an entire football commentary together? Stay tuned, folks, because it will happen . . . Bob Dylan's next album will be entitled "Blood on the Tracks" . . . George Harrison, off on a tour, began by pronouncing "having played with other musicians, I don't even think the Beatles were that good." Would the Beatles ever get back together (of course they won't)? "The only way it will happen is if we're all broke." At least he's honest about it.