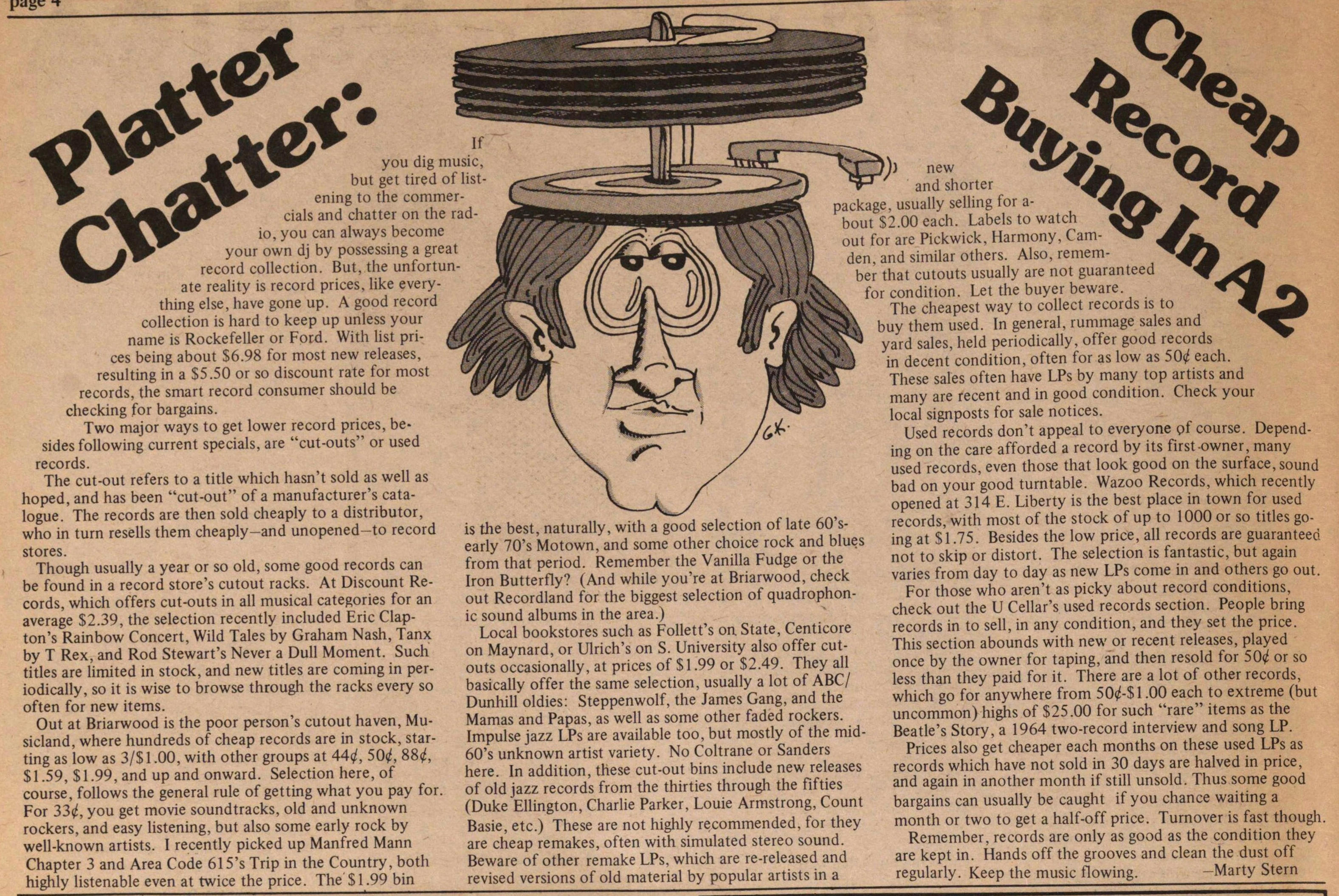 If 'ou dig music, et tired of listie commer:r on the radbecome ing a great ate reality is record prices, like everything else, have gone up. A good record collection is hard to keep up unless your name is Rockefeller or Ford. With list prices being about $6.98 for most new releases, resulting in a $5.50 or so discount rate for most records, the smart record consumer should be checking for bargains. Two major ways to get lower record prices, besides following current specials, are "cut-outs" or used records. The cut-out refers to a title which hasn't sold as well as hoped, and has been "cut-out" of a manufacturéis catalogue. The records are then sold cheaply to a distributor, who in turn resells them cheaply-and unopened-to record stores. Though usually a year or so oíd, some good records can be found in a record store's cutout racks. At Discount Records, which offers cut-outs in all musical categories for an average S2.39, the selection recently included Eric Clapton's Rainbow Concert, Wild Tales by Graham Nash, Tanx by T Rex, and Rod Stewart's Never a Dull Moment. Such titles are limited in stock, and new titles are coming in periodically, so it is wise to browse through the racks every so often for new items. Out at Briarwood is the poor person's cutout haven, Musicland, where hundreds of cheap records are in stock, starting as low as 3$ 1.00, with other groups at 444, 50tf, 88, $1.59, $1.99, and up and onward. Selection here, of course, follows the general rule of getting what you pay for. For 33, you get movie soundtracks, old and unknown rockers, and easy listening, but also some early rock by well-known artists. I recently picked up Manfred Mann Chapter 3 and Area Code 61 5's Trip in the Country, both highly listenable even at twice the price. The $1 .99 bin is the best, naturally, with a good selection ot late 6U searly 70's Motown, and some other choice rock and blues from that period. Remember the Vanilla Fudge or the Iron Butterfly? (And while you're at Briarwood, check out Recordland for the biggest selection of quadrophonic sound albums in the area.) Local bookstores such as Follett's oa State, Centicore on Maynard, or Ulrich's on S. University also offer cutouts occasionally , at prices of $ 1 .99 or $2.49. They all basically offer the same selection, usually a lot of ABC Dunhill oldies: Steppenwolf, the James Gang, and the Mamas and Papas, as well as some other faded rockers. Impulse jazz LPs are available too, but mostly of the mid60's unknown artist variety. No Coltrane or Sanders here. In addition, these cut-out bins include new releases of old jazz records from the thirties through the fifties (Duke Ellington, Charlie Parker, Louie Armstrong, Count Basie, etc.) These are not highly recommended, for they are cheap remakes, often with simulated stereo sound. Beware of other remake LPs, which are re-released and revised versions of old material by popular artists in a "tcty new v-1 and shc package, usually sel boutS2.00each. out for are Pickwi den, and similar ( ber that cutouts v for condition. The cheapest way to collect records is to M buy them used. In general, rummage sales and yard sales, held periodically, offer good records in decent condition, often for as low as 50 each. These sales often have LPs by many top artists and many are recent and in good condition. Check your local signposts for sale notices. Used records don't appeal to everyone pf course. Depending on the care afforded a record by its firstowner, many used records, even those that look good on the surface, sound bad on your good turntable. Wazoo Records, which recently opened at 314 E. Liberty is the best place in town for used records, with most of the stock of up to 1000 or so titles going at $1.75. Besides the low price, all records are guaranteeci not to skip or distort. The selection is fantastic, but again varies from day to day as new LPs come in and others go out. For those who aren't as picky about record conditions, check out the U Cellar's used records section. People bring records in to sell, in any condition, and they set the price. This section abounds with new or recent releases, played once by the owner for taping, and then resold for 50 or so less than they paid for it. There are a lot of other records, which go for anywhere from 50tf-$l .00 each to extreme (but uncommon) highs of $25.00 for such "rare" items as the Beatle's Story, a 1964 two-record interview and song LP. Prices also get cheaper each months on these used LPs as records which have not sold in 30 days are halved in price, and again in another month if still unsold. Thus some good bargains can usually be caught if you chance waiting a month or two to get a half-off price. Turnover is fast thougli. Remember, records are only as good as the condition they are kept in. Hands off the grooves and clean the dust off regularly. Keep the music flowing.