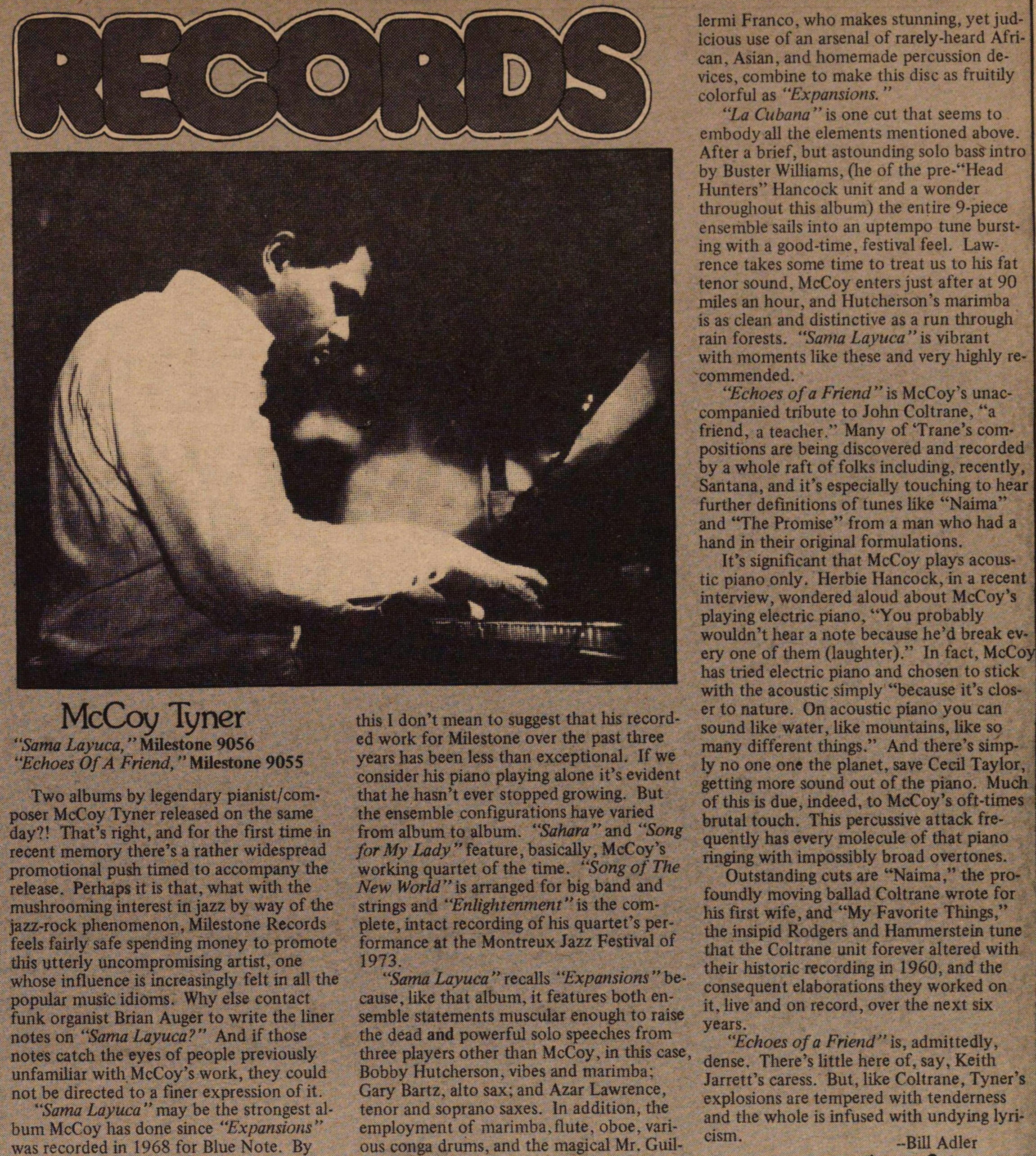 Two albums by legendary pianist composer McCoy Tyner released on the same day?! That's right, and for the first time in recent memory there's a rather widespread promotional push timed to accompany the release. Perhaps it is that, what with the mushrooming interest in jazz by way of the jazz-rock phenomenon, Milestone Records feels fairly safe spending money to promote this utterly uncompromising artist, one whose influence is increasingly felt in all the popular music idioms. Why else contact funk. organist Brian Auger to write the liner notes on "Sama Layuca?" And if those notes catch the eyes of people previously unfamiliar with McCoy's work, they could not be directed to a finer expression of it.

"Sama Layuca" may be the strongest album McCoy has done since "Expansions " was recorded in 1968 for Blue Note. By this I don't mean to suggest that his recorded work for Milestone over the past three years has been less than exceptional. If we consider his piano playing alone it's evident that he hasn't ever stopped growing. But the ensemble configurations have varied from album to album. "Sahara" and "Song for My Lady " feature, basically, McCoy's working quartet of the time. "Song of The New World" is arranged for big band and strings and "Enlightenment" is the complete, intact recording of his quartet's performance at the Montreux Jazz Festival of 1973.

"Sama Layuca " recalls "Expansions " because, like that album, it features both ensemble statements muscular enough to raise the dead and powerful solo speeches from three players other than McCoy, in this case, Bobby Hutcherson, vibes and marimba; Gary Bartz, alto sax; and Azar Lawrence, tenor and soprano saxes. In addition, the employment of marimba, flute, oboe, various conga drums, and the magical Mr. Guillermi Franco, who makes stunning, yet judicious use of an arsenal of rarely-heard African, Asian, and homemade percussion devices, combine to make this disc as fruitily colorful as "Expansions.

"La Cubana" is one cut that seems to embody all the elements mentioned above. After a brief, but astounding solo bass intro by Bitster Williams, (he of the pre-"Head Hunters" Hancock unit and a wonder throughout this album) the entire 9-piece ensemble sails into an up tempo tune bursting with a good-time, festival feel. Lawrence takes some time to treat us to his fat tenor sound, McCoy enters just after at 90 miles an hour, and Hutcherson's marimba is as clean and distinctive as a run through rain forests. "Sama Layuca " is vibrant with moments like these and very highly recommended.

"Echoes of a Friend " is McCoy's unaccompanied tribute to John Coltrane, "a friend, a teacher." Many of Trane's compositions are being discovered and recorded by a whole raft of folks including, recently, Santana, and it's especially touching to hear further definitions of tunes like "Naima" and "The Promise" from a man who had a hand in their original formulations.

It's significant that McCoy plays acoustic piano only. Herbie Hancock, in a recent interview, wondered aloud about McCoy's playing electric piano, "You probably wouldn't hear a note because he'd break ever one of them (laughter)." In fact, McCoy has tried electric piano and chosen to stick with the acoustic simply "because it's closer to nature. On acoustic piano you can sound like water, like mountains, like so many different things." And there's simply no one one the planet, save Cecil Taylor, getting more sound out of the piano. Much of this is due, indeed, to McCoy's oft-times brutal touch. This percussive attack frequently has every molecule of that piano ringing with impossibly broad overtones.

Outstanding cuts are "Naima," the profoundly moving ballad Coltrane wrote for his first wife, and "My Favorite Things," the insipid Rodgers and Hammerstein tune that the Coltrane unit forever altered with their historic recording in 1960, and the consequent elaborations they worked on it, live and on record, over the next six years.

"Echoes of a Friend" is, admittedly, dense. There's little here of, say, Keith Jarrett's caress. But, like Coltrane, Tyner's explosions are tempered with tenderness and the whole is infused with undying lyricism.