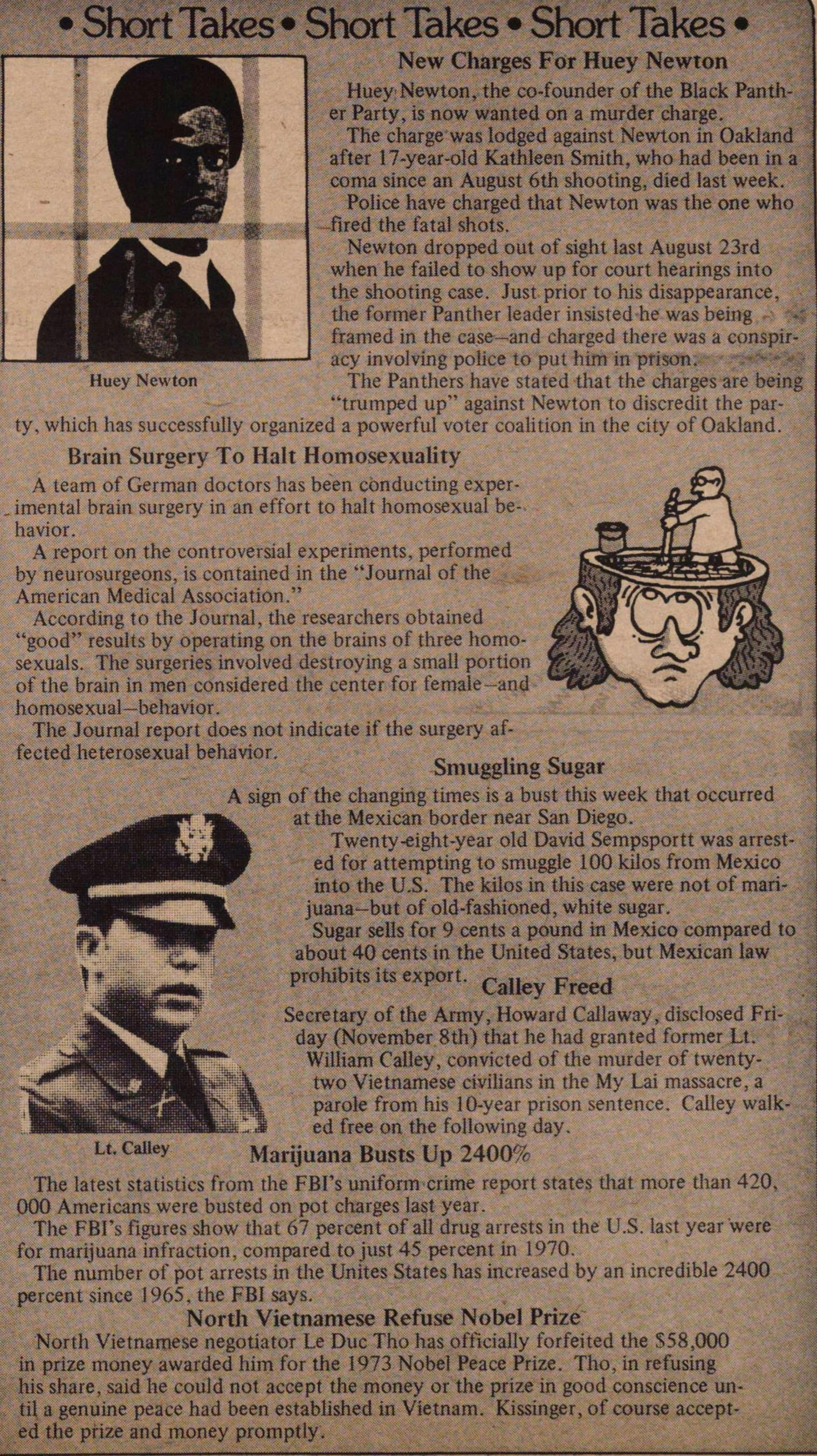 Huey Newton, the co-founder of the Black Panther Party, is now wanted on a murder charge. The charge was lodged against Newton in Oakland after 17-year-old Kathleen Smith, who had been in a coma since an August 6th shooting, died last week.

Police have charged that Newton was the one who fïred the fatal shots.

Newton dropped out of sight last August 23rd when he failed to show up for court hearings into the shooting case. Just prior to his disappearance, the former Panther leader insisted he was being framed in the case- and charged there was a conspiracy involving pólice to put him in prison.

The Panthers have stated that the charges are being "trumped up" against Newton to discredit the party, which has successfully organized a powerful voter coalition in the city of Oakland.

A team of German doctors has been conducting experimental brain surgery in an effort to halt homosexual behavior.

A report on the controversial experiments, performed by neurosurgeons, is contained in the "Journal of the American Medical Association."

According to the Journal, the researchers obtained "good" results by operating on the brains of three homosexuals. The surgeries involved destroying a small portion of the brain in men considered the center for female- and homosexual- behavior.

The Journal report does not indicate if the surgery affected heterosexual behavior.

A sign of the changing times is a bust this week that occurred at the Mexican border near San Diego.

Twenty-eight-year old David Sempsportt was arrested for attempting to smuggle 100 kilos from Mexico into the U.S. The kilos in this case were not of marijuana-but of old-fashioned, white sugar.

Sugar sells for 9 cents a pound in Mexico compared to about 40 cents in the United States, but Mexican law prohibitsits export,

Secretary of the Army, Howard Callaway, disclosed Friday (November 8th) that he had granted former Lt. William Calley, convicted of the murder of twenty-two Vietnamese civilians in the My Lai massacre, a parole from his 10-year prison sentence. Calley walked free on the following day.

The latest statistics from the FBI's uniform crime report states that more than 420,000 Americans were busted on pot charges last year.

The FBI's figures show that 67 percent of all drug arrests in the U.S. last year were for marijuana infraction, compared to just 45 percent in 1970.

The number of pot arrests in the Unites States has increased by an incredible 2400 percent since 1965, the FBI says.

North Vietnamese negotiator Le Duc Tho has officially forfeited the $58,000 in prize money awarded him for the 1973 Nobel Peace Prize. Tho, in refusing his share, said he could not accept the money or the prize in good conscience until a genuine peace had been established in Vietnam. Kissinger, of course accepted the prize and money promptly.