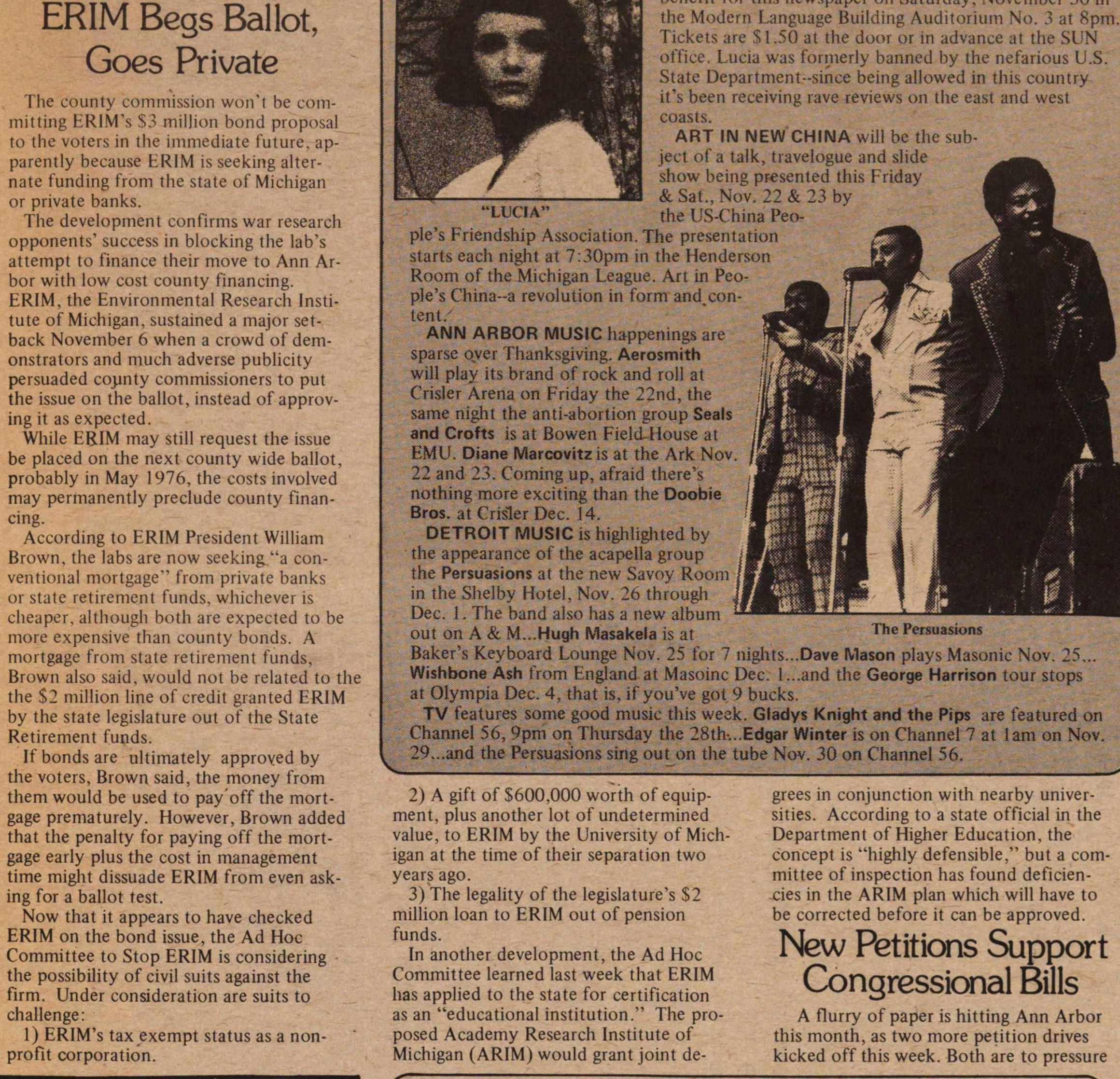 The county commission won't be committing ERIM's $3 million bond proposal to the voters in the immediate future, apparently because ERIM is seeking alternate funding from the state of Michigan or private banks.

The development confirms war research opponents' success in blocking the lab's attempt to finance their move to Ann Arbor with low cost county financing. ERIM, the Environmental Research Institute of Michigan, sustained a major setback November 6 when a crowd of demonstrators and much adverse publicity persuaded county commissioners to put the issue on the ballot, instead of approving it as expected.

While ERIM may still request the issue be placed on the next county wide ballot, probably in May 1976, the costs involved may permanently preclude county financing.

According to ERIM President William Brown, the labs are now seeking "a conventional mortgage" from private banks or state retirement funds, whichever is cheaper, although both are expected to be more expensive than county bonds. A mortgage from state retirement funds, Brown also said, would not be related to the the $2 million line of credit granted ERIM by the state legislature out of the State Retirement funds.

If bonds are ultimately approved by the voters, Brown said, the money from them would be used to pay off the mortgage prematurely. However, Brown added that the penalty for paying off the mortgage early plus the cost in management time might dissuade ERIM from even asking for a ballot test.

Now that it appears to have checked ERIM on the bond issue, the Ad Hoc Committee to Stop ERIM is considering the possibility of civil suits against the firm. Under consideration are suits to challenge:

2) A gift of $600,000 worth of equipment, plus another lot of undetermined value, to ERIM by the University of Michigan at the time of their separation two years ago.

3) The legality of the legislature's $2 million loan to ERIM out of pension funds.

In another development, the Ad Hoc Committee learned last week that ERIM has applied to the state for certification as an "educational institution." The proposed Academy Research Institute of Michigan (ARIM) would grant joint degrees in conjunction with nearby universities. According to a state official in the Department of Higher Education, the concept is "highly defensible," but a committee of inspection has found deficiencies in the ARIM plan which will have to be corrected before it can be approved.