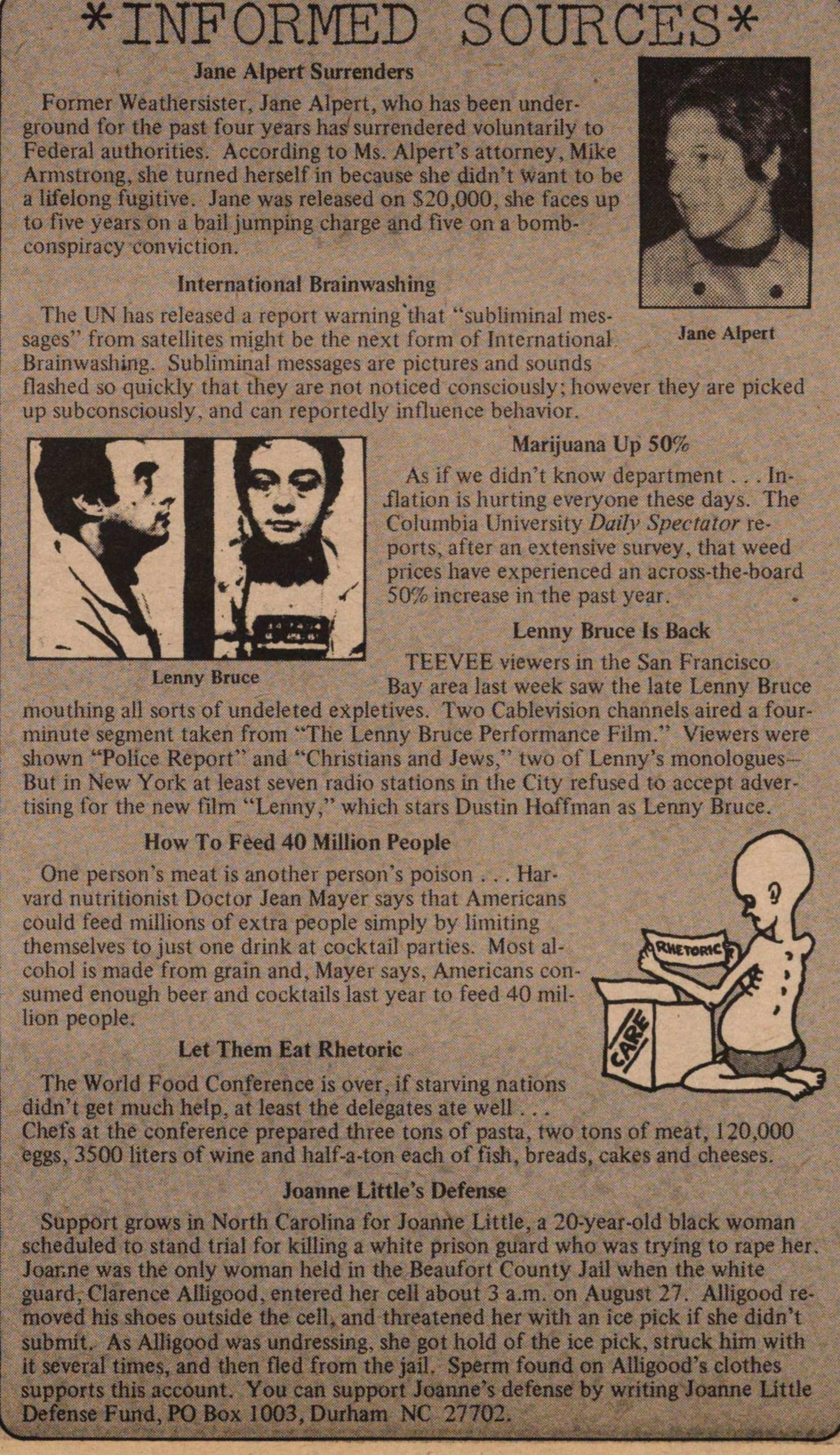 Former Weathersister, Jane Alpert, who has been underground for the past four years has surrendered voluntarily to Federal authorities. According to Ms. Alpert's attorney, Mike Armstrong, she turned herself in because she didn't want to be a lifelong fugitive. Jane was released on $20,000, she faces up to five years on a bail jumping charge and five on a bomb conspiracy conviction.

The UN has released a report warning that "subliminal messages" from satellites might be the next form of International Brainwashing. Subliminal messages are pictures and sounds flashed so quickly that they are not noticed consciously; however they are picked up subconsciously, and can reportedly influence behavior.

As if we didn't know department . . . Inflation is hurting everyone these days. The Columbia University Daily Spectator reports, after an extensive survey, that weed prices have experienced an across-the-board 50% increase in the past year.

Lenny Bruce Is Back

How To Feed 40 Million People

One person's meat is another person's poison . . . Harvard nutritionist Doctor Jean Mayer says that Americans could feed millions of extra people simply by limiting themselves to just one drink at cocktail parties. Most alcohol is made from grain and, Mayer says, Americans consumed enough beer and cocktails last year to feed 40 million people.

The World Food Conference is over, if starving nations didn't get much help, at least the delegates ate well . . . Chefs at the conference prepared three tons of paste, two tons of meat, 120,000 eggs, 3500 liters of wine and half-a-ton each of fish, breads, cakes and cheeses.

Support grows in North Carolina for Joanne Little, a 20-year-old black woman scheduled to stand trial for killing a white prison guard who was trying to rape her. Joanne was the only woman held in the Beaufort County Jail when the white guard, Clarence Alligood, entered her cell about 3 a.m. on August 27. Alligood removed his shoes outside the cell, and threatened her with an ice pick if she didn't submit. As Alligood was undressing, she got hold of the ice pick, struck him with it several times, and then fled from the jail. Sperm found on Alligood's clothes supports this account. You can support Joanne 's defense by writing Joanne Little Defense Fund, PO Box 1003, Durham NC 27702.