VD: Nothing To Clap About 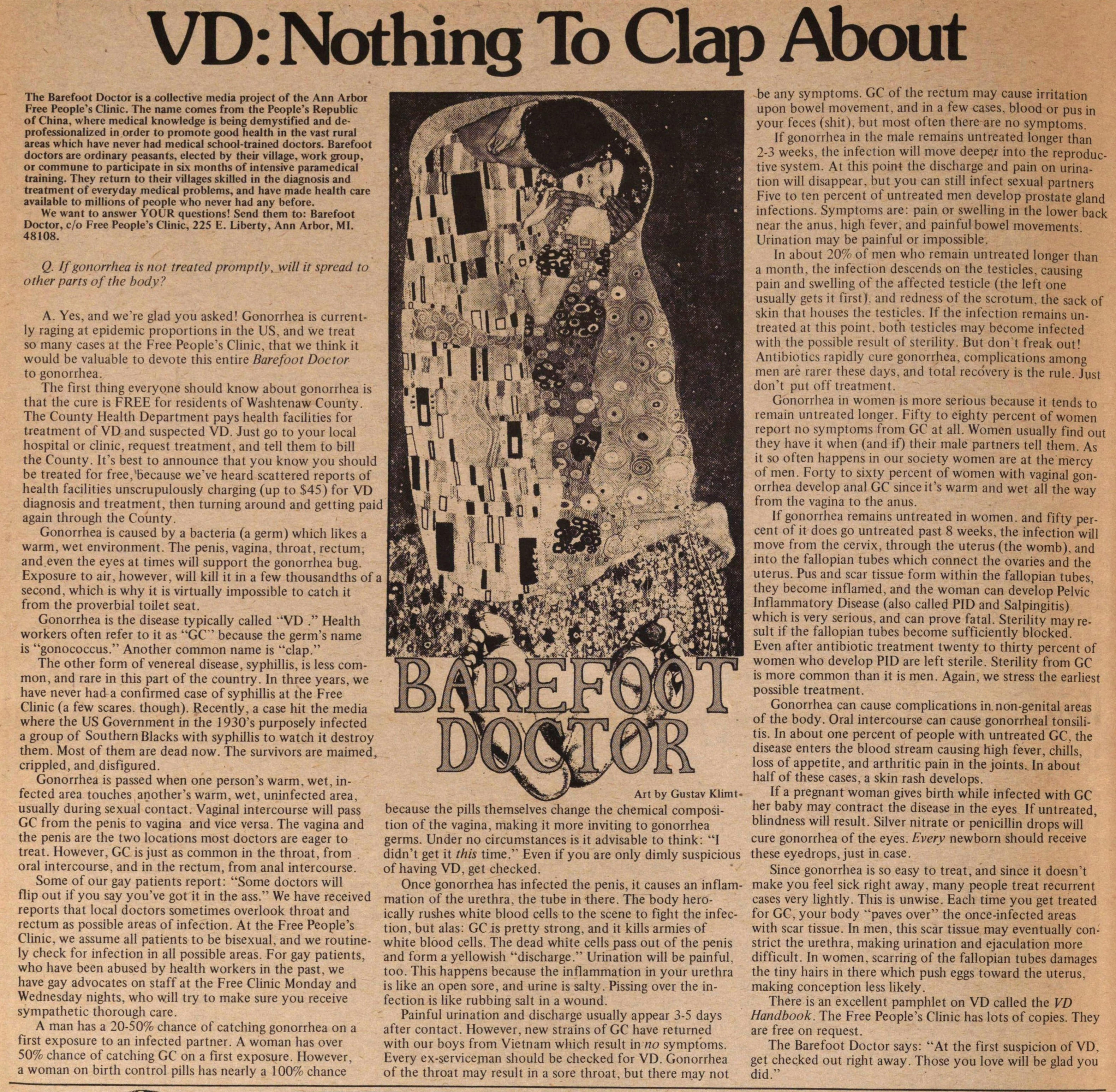 The Barefoot Doctor is a collective media project of the Ann Arbor Free People's Clinic. The name comes from the People's Republic of China, where medical knowledge is being demystified and de-professionalized in order to promote good health in the vast rural areas which have never had medical school-trained doctors. Barefoot doctors are ordinary peasants, elected by their village. work group, or commune to participate in slx months of intensive paramedical training. They return to their villages skilled in the diagnosis and treatment of everyday medical problems, and have made health care available to millions of people who never had any before.

Q. If gonorrhea is not treated promptly, will it spread to other parts of the body?

A. Yes, and we're glad you asked! Gonorrhea is currently raging at epidemic proportions in the US, and we treat so many cases at the Free People"s Clinic, that we think it would be valuable to devote this entire Barefoot Doctor to gonorrhea.

The first thing everyone should know about gonorrhea is that the cure is FREE for residents of Washtenaw County. The County Health Department pays health facilities for treatment of VD and suspected VD. Just go to your local hospital or clinic. request treatment. and tell them to bill the County. It's best to announce that you know you should be treated for free, 'because we've heard scattered reports of health facilities unscrupulously charging(up to $45) for VD diagnosis and treatment, then turning around and getting paid again through the County.

Gonorrhea is caused by a bacteria (a germ) which likes a warm, wet environment. The penis, vagina, throat, rectum, and even the eyes at times will support the gonorrhea bug. Exposure to air, however, will kill it in a few thousandths of a second, which is why it is virtually impossible to catch it from the proverbial toilet seat.

Gonorrhea is the disease typically called "'VD ." Health workers often refer to it as "GC' because the germ's name is "gonococcus." Another common name is "clap."

The other form of venereal disease, syphillis, is less common, and rare in this part of the country. In three years, we have never had a confirmed case of syphillis at the Free Clinic (a few scares. though). Recently, a case hit the media where the US Government in the 1930's purposely infected a group of Southern Blacks with syphillis to watch it destroy them. Most of them are dead now. The survivors are maimed, crippled, and disfigured.

Some of our gay patients report: "Some doctors will flip out if you say you've got it in the ass." We have received reports that local doctors sometimes overlook throat and rectum as possible areas of infection. At the Free People's Clinic, we assume all patients to be bisexual, and we routinely check for infection in all possible areas. For gay patients, who have been abused by health workers in the past, we have gay advocates on staff at the Free Clinic Monday and Wednesday nights, who will try to make sure you receive sympathetic thorough care.

A man has a 20-50% chance of catching gonorrhea on a first exposure to an infected partner. A woman has over 50% chance of catching GC on a first exposure. However, a woman on birth control pills has nearly a 100% chance because the pills themselves change the chemical composition of the vagina, making it more inviting to gonorrhea germs. Under no circumstances is it advisable to think: "I didn't get it this time." Even if you are only dimly suspicious of having VD, get checked.

Once gonorrhea has infected the penis, it causes an inflammation of the urethra, the tube in there. The body heroically rushes white blood cells to the scene to fight the infection, but alas: GC is pretty strong, and it kills armies of white blood cells. The dead white cells pass out of the penis and form a yellowish "discharge." Urination will be painful, too. This happens because the inflammation in your urethra is like an open sore, and urine is salty. Pissing over the infection is like rubbing salt in a wound.

Painful urination and discharge usually appear 3-5 days after contact. However, new strains of GC have returned with our boys from Vietnam which result in no symptoms. Every ex-serviceman should be checked for VD. Gonorrhea of the throat may result in a sore throat, but there may not be any symptoms. GC of the rectum may cause irritation upon bowel movement, and in a few cases, blood or pus in your feces (shit ), but most often there are no symptoms.

If gonorrhea in the male remains untreated longer than 2-3 weeks, the infection will move deeper into the reproductive system. At this point the discharge and pain on urination will disappear, but you can still infect sexual partners Five to ten percent of untreated men develop prostate gland infections. Symptoms are: pain or swelling in the lower back near the anus, high fever, and painful bowel movements. Urination may be painful or impossible.

In about 20% of men who remain untreated longer than a month, the infection descends on the testicles, causing pain and swelling of the affected testicle (the left one usually gets it first). and redness of the scrotum, the sack of skin that houses the testicles. If the infection remains untreated at this point, both testicles may become infected with the possible result of sterility. But don't freak out! Antibiotics rapidly cure gonorrhea, complications among men are rarer these days, and total recovery is the rule. Just don't put off treatment.

If gonorrhea remains untreated in women. and fifty percent of it does go untreated past 8 weeks, the infection will move from the cervix, through the uterus (the womb), and into the fallopian tubes which connect the ovaries and the uterus. Pus and scar tissue form within the fallopian tubes, they become inflamed, and the woman can develop Pelvic Inflammatory Disease (also called PID and Salpingitis) which is very serious, and can prove fatal. Sterility may result if the fallopian tubes become sufficiently blocked. Even after antibiotic treatment twenty to thirty percent of women who develop PID are left sterile. Sterility from GC is more common than it is men. Again, we stress the earliest possible treatment.

Gonorrhea can cause complications in non-genital areas of the body. Oral intercourse can cause gonorrheal tonsilitis. In about one percent of people with untreated GC, the disease enters the blood stream causing high fever, chills, loss of appetite, and arthritic pain in the joints. In about half of these cases, a skin rash develops.

If a pregnant woman gives birth while infected with GC her baby may contract the disease in the eyes If untreated, blindness will result. Silver nitrate or penicillin drops will cure gonorrhea of the eyes. Every newborn should receive these eyedrops, just in case.

Since gonorrhea is so easy to treat, and since it doesn't make you feel sick right away, many people treat recurrent cases very lightly. This is unwise. Each time you get treated for GC, your body "paves over" the once-infected areas with scar tissue. In men, this scar tissue may eventually constrict the urethra, making urination and ejaculation more difficult. In women, scarring of the fallopian tubes damages the tiny hairs in there which push eggs toward the uterus, making conception less likely.

There is an excellent pamphlet on VD called the VD Handbook. The Free People's Clinic has lots of copies. They are free on request.

The Barefoot Doctor says: "At the first suspicion of VD, get checked out right away. Those you love will be glad you did."