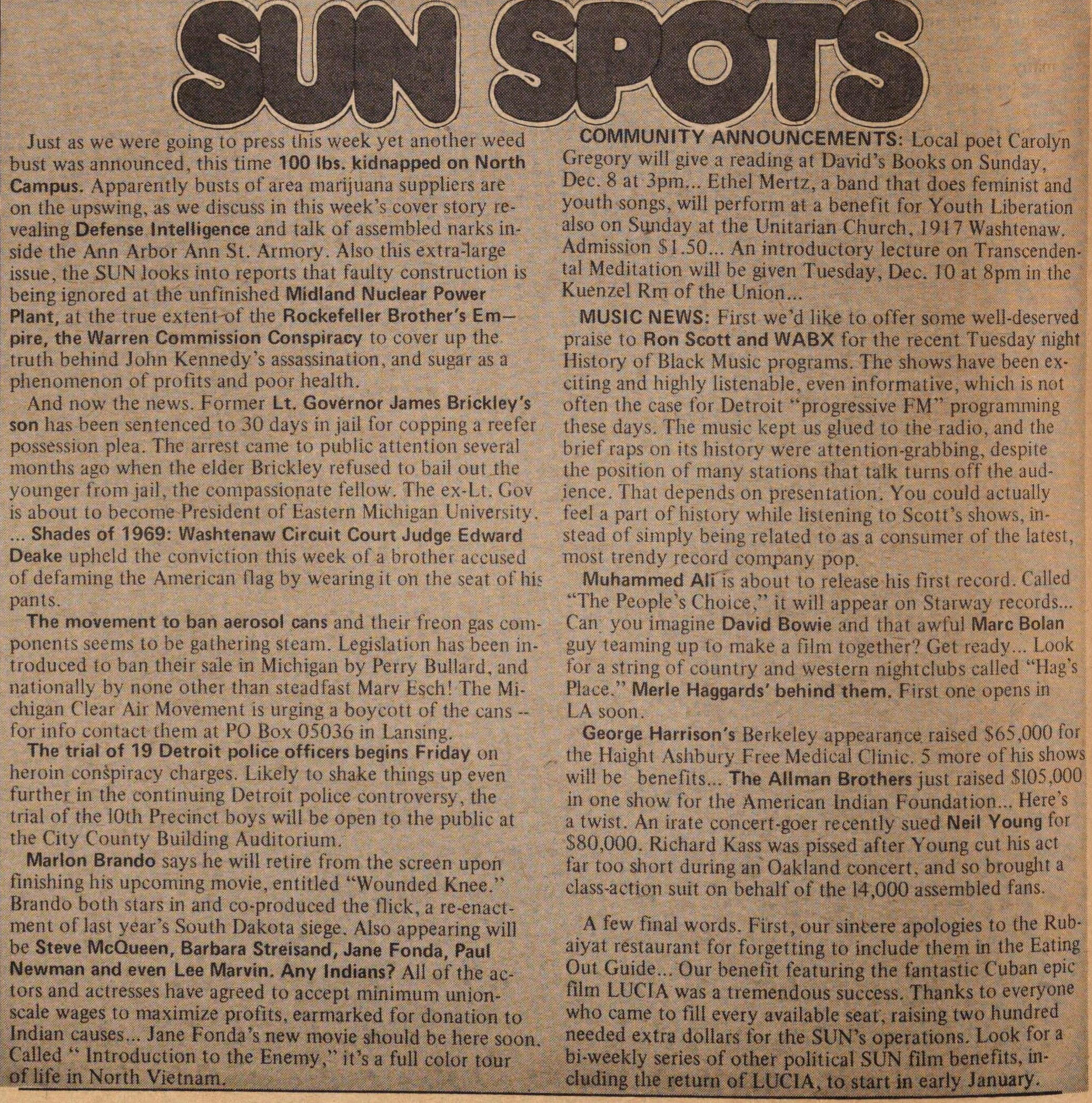 Jusl as we were going to press this week yet another weed bust was announced, this time 100 Ibs. kidnapped on North Campus. Apparently busts of área marijuana suppliers are on the upswing, as we discuss in this week's cover story revealing Defense Intelligence and talk of assembled narks inside the Ann Arbor Ann St. Armory. Aiso this extraarge issue, the SUN Jooks into reports that faulty construction is beingignored at the unfinished Midland Nuclear Power Plant, at the true extent v( the Rockefeller Brother's Empire, the Warren Commission Conspiracy to cover up the Iruth behind John Kennedy 's assassination, and sugar as a phenomenon of profits and poor health. And now the news. Former Lt. Govérnor James Brickley's son lias been senteneed to 30 days in jail for copping a reefei possession plea. The arrest came to public attentlon severa] months ago when the eider Brickley refused to baii om the younger trom jail. the compassionate tellow. The ex-Lt. Gov is about to become ('resident of liastern Michigan University. ... Shades of 1969: Washtenaw Circuit Court Judge Edward Deake uphcld the cortvlction this week of a brother accused of defaming the American flagby wearingit on the seat ofhis pants. The movement to ban aerosol cans and their fieon gas componen ts seems to be gathering steam. Legislation has been introduced to ban tlieir sale in Michigan by Perry Bullard, and nationally by none othcr than steadfast Marv Ésch! The Michigan ('lear Air Movement is urging a boycott of the cans -- for info contact them at PO Box 05036 in Lansing. The trial of 19 Detroit pólice officers begins Friday on heroin conspiracy charges. Likely to shake things up even further in the continuing Detroit pólice controversy, tiie trial of the lOth Precinct boys will be open to the public at the City County Building Auditorium. Marión Brando says he will retire from the screen upon finishing his upcoming movie, entitled "Wounded Knee." Brando both stars in and co-produced the flick, a re-enaetment of last year's South Dakota siege. Also appearing will be Steve McQueen, Barbara Streisand, Jane Fonda, Paul Newman and even Lee Marvin. Any Indians? All of the actors and actresses have agreed to accept minimum unionscaie wages to maximize profits, earmarked for donation to Indian causes... Jane Fonda 's new movie should be here soon. Called " lntroduction to the Enemy," it's a full color tour of life in North Vietnam. COMMUNITY ANNOUNCEMENTS: Local poet Carolyn Gregory will give a readiiig at David's Books on Sunday, Dec. 8 at 3pm... Ethel Mertz, a band that does feminist and youth songs, will perform at a benefit for Youth Liberation also on Synday at the Unitarian Church, 1917 Washtenaw. Admission SI. 50... An introductory lecture on Transcendental Meditation will be given Tuesday, Dec. 10 at 8pm in the Kuenzel Rm of the Union... MUSIC NEWS: First we'd like to offer some well-deserved praise to Ron Scott and WABX for the recent Tuesday night History of Black Music programs. The shows have been exciting and highly listenable, even informative, which is not often the case for Detroit "progressive FM" programming these days. The music kept us glued to the radio, and the brief raps on its history were attention-grabbing, despite the position of many stations that talk turns off the audience. That depends on prescntalion. You could actually teel a part of history whjle listening to Scott 's shows, instead of simpiy being related to as a consumer of the latest, most trendy record coinpany pop. IVluhammed Ali is about to release his first record, ('alled "The People's Choice." it will appear on Starway records... Can you imagine David Bowie ánd that awful Mare Bolan guy teaming up lo make a film together? Get ready... Look for a string of country, and western nightclubs called "Hag's Place." Merle Haggards' behind them. First one opens in LA soon . George Harrison's Berkeley uppearance raised $65,000 for the Haight Ashbury Free Medical Clinic. 5 more of his shows will be benefits... The Allman Brothers just raised $105,000 in one show for the American Indian Foundation... Here's a twist. An irate concert-goer recently sued Neil Young for S80,000. Richard Kass was pissed after Young cut his act far too short during an Oakland concert, and so brought a class-action suit on behalf of the 14,000 assembled fans. A few final words. First, our sincere apologies to the Rubaiyat restaurant for forgetting to include them in the Eating Out Guide... Our benefit featuring the fantastic Cuban epic film LUCÍA was a tremendous success. Thanks to everyone who came to fill every available seat, raising two hundred needed extra dollars for the SUN's operations. Look for a bi-weekly series of other political SUN film benefits, induding the return of LUCIA, to start in early January.