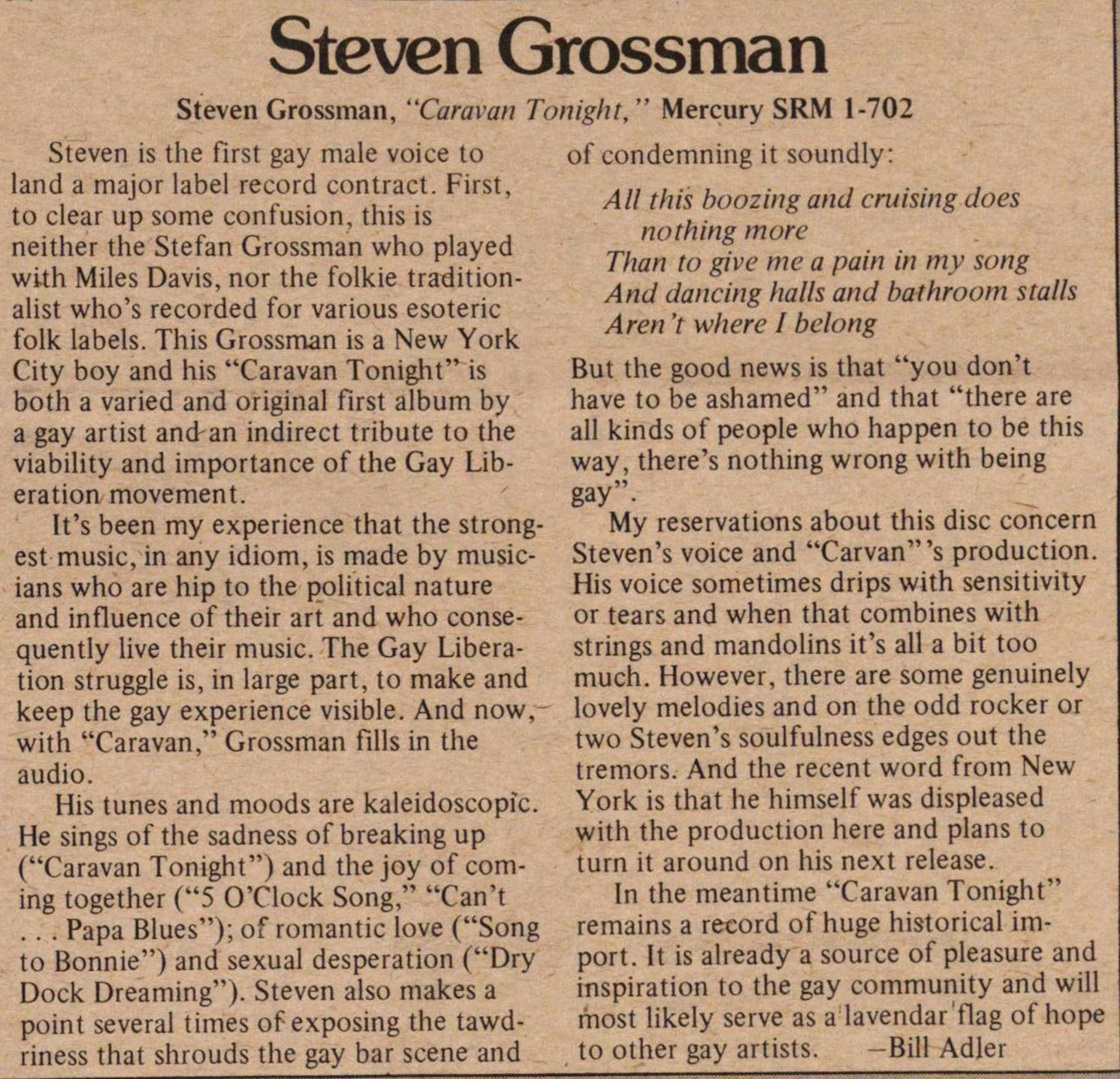 Steven Grossman, "Caravan Tanight, " Mercury SRM 1-702 Steven is the first gay male voice to land a major label record contract. First, to clear up some confusión, this is neither the Stefan Grossman who played with Miles Davis, nor the folkie traditionalist who's recorded for various esoteric folk labels. This Grossman is a New York City boy and his "Caravan Tonight" is both a varied and original first album by a gay artist and an indirect tribute to the viability and importance of the Gay Liberation movement. It's been my experience that the strongest music, in any idiom, is made by musicians who are hip to the political nature and influence of their art and who consequently live their music. The Gay Liberation struggle is, in large part, to make and keep the gay experience visible. And now, with "Caravan," Grossman filis in the audio. His tunes and moods are kaleidoscopic. He sings of the sadness of breaking up ("Caravan Tonight") and the joy of coming together ("5 O'Clock Song," "Can't . . . Papa Blues"); of romantic love ("Song to Bonnie") and sexual desperation ("Dry Doek Dreaming"). Steven also makes a point several times of exposing the tawdriness that shrouds the gay bar scène and of condemning it soundly: All this boozing and cruising does nothing more Than to give me a pain in my song And dancing halls and bathroom stalls Aren 't where I belong But the good news is that "you don't have to be ashamed" and that "there are all kinds of people who happen to be this way, there 's nothing wrong with being gay"My reservations about this disc concern Steven's voice and "Carvan"'s production. His voice sometimes drips with sensitivity or tears and when that combines with strings and mandolins it's all a bit too much. However, there are some genuinely lovely melodies and on the odd rocker or two Steven's soulfulness edges out the tremors. And the recent word from New York is that he himself was displeased with the production here and plans to turn it around on his next release. In the meantime "Caravan Tonight" remains a record of huge historical import. It is already a source of pleasure and inspiration to the gay community and will most likely serve as a lavendar'flag of hope to other gay artists.