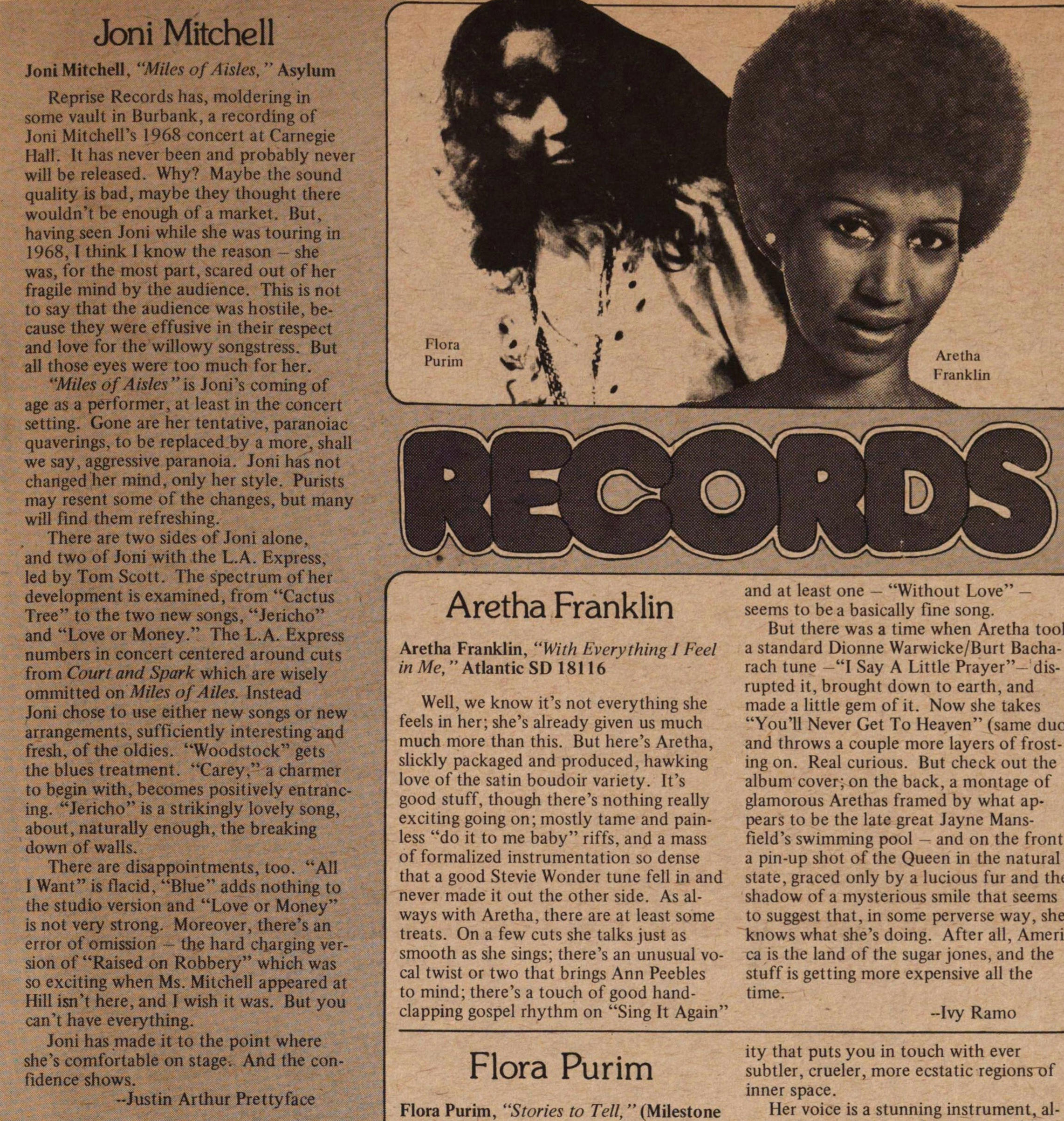 Joni Mitchell, "Miles of Aisles, " Asylum Reprise Records has, moldering in some vault in Burbank, a recording of Joni Mitchell's 1968 concert at Carnegie Hat!. It has never been and probably never will be released. Why? Maybe the sound quality is bad, maybe they thought there wouldn't be enough of a market. But, having seen Joni while she was touring in 1968, 1 think I know the reason - she was, for the most part, scared out of her fragüe mind by the audience. This is not to say that the audience was hostile, because they were effusive in their respect and love for the willowy songstress. But all those eyes were too much for her. "Miles of Aisles "is Joni's coming of age as a performer, at least in the concert setting. Gone are her tentative, paranoiac quaverings, to be replaced by a more, shall we say, aggressive paranoia. Joni has not changed her mind, only her style. Purists may resent some of the changes, but many will find them refreshing. There are t wo sides of Joni alone, and two of Joni with the L.A. Express, led by Torn Scott. The spectrum of her development is examined, from "Cactus Tree" to the two new songs, "Jericho" and "Love or Money." The L.A. Express numbers in concert centered around cuts from Court and Spark which are wisely ommitted on Miles ofAiles. Instead Joni chose to use either new songs or new arrangements, sufficiently interesting and fresh, of the oldies. "Woodstock" gets the blues treatment. "Carey," a charmer to begin with, becomes positively entrancing. "Jericho" is a strikingly lovely song, about, naturally enough, the breaicing down of walls. There are disappointments, too. "AJÍ 1 Want" is flacid, "Blue" adds nothing to the studio version and "Love or Money" is not very strong. Moreover, there's an error of omission - the hard diarging version of "Raised on Robbery" which was so exciting when Ms. Mitchell appeared at Hill isn't here, and I wish it was. But you can't have everything. Joni has made it to the point where she's comfortable on stage. And the confidence shows.