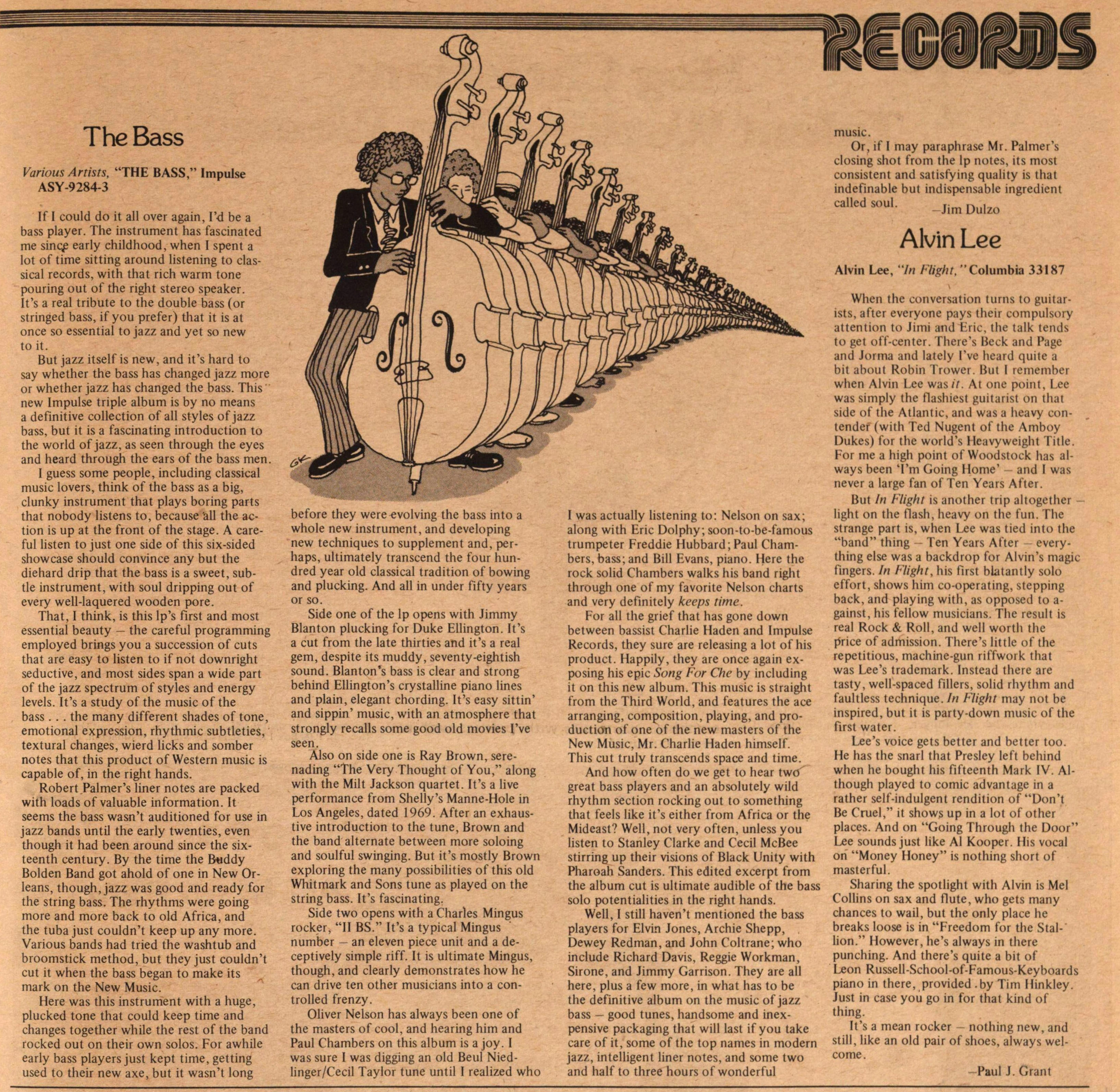 If I could do it all over again, I'd be a bass player. The instrument has fascinated me since early childhood, when I spent a lot of time sitting around listening to classical records, with that rich warm tone pouring out of the right stereo speaker. It's a real tribute to the double bass (or stringed bass, if you prefer) that it is at once so essential to jazz and yet so new to it.

But jazz itself is new, and it's hard to say whether the bass has changed jazz more or whether jazz has changed the bass. This new Impulse triple album is by no means a definitive collection of all styles of jazz bass, but it is a fascinating introduction to the world of jazz, as seen through the eyes and heard through the ears of the bass men.

I guess some people, including classical music lovers, think of the bass as a big, clunky instrument that plays boring parts that nobody listens to, because all the action is up at the front of the stage. A careful listen to just one side of this six-sided showcase should convince any but the diehard drip that the bass is a sweet, subtle instrument, with soul dripping out of every well-lacquered wooden pore.

That, I think, is this lp's first and most essential beauty - the careful programming employed brings you a succession of cuts that are easy to listen to if not downright seductive, and most sides span a wide part of the jazz spectrum of styles and energy levels. It's a study of the music of the bass . . . the many different shades of tone, emotional expression, rhythmic subtleties, textural changes, weird licks and somber notes that this product of Western music is capable of, in the right hands.

Robert Palmer's liner notes are packed with loads of valuable information. It seems the bass wasn't auditioned for use in jazz bands until the early twenties, even though it had been around since the sixteenth century. By the time the Buddy Bolden Band got ahold of one in New Orleans, though, jazz was good and ready for the string bass. The rhythms were going more and more back to old Africa, and the tuba just couldn't keep up any more. Various bands had tried the washtub and broomstick method, but they just couldn't cut it when the bass began to make its mark on the New Music.

Here was this instrument with a huge, plucked tone that could keep time and changes together while the rest of the band rocked out on their own solos. For awhile early bass players just kept time, getting used to their new axe, but it wasn't long before they were evolving the bass into a whole new instrument, and developing new techniques to supplement and, perhaps, ultimately transcend the four hundred year old classical tradition of bowing and plucking. And all in under fifty years or so.

Side one of the lp opens with Jimmy Blanton plucking for Duke Ellington. It's a cut from the late thirties and it's a real gem, despite its muddy, seventy-eightish sound. Blanton's bass is clear and strong behind Ellington's crystalline piano lines and plain, elegant chording. It's easy sittin' and sippin' music, with an atmosphere that strongly recalls some good old movies I've seen.

Also on side one is Ray Brown, serenading "The Very Thought of You," along with the Milt Jackson quartet. It's a live performance from Shelly's Manne-Hole in Los Angeles, dated 1969. After an exhaustive introduction to the tune, Brown and the band alternate between more soloing and soulful swinging. But it's mostly Brown exploring the many possibilities of this old Whitmark and Sons tune as played on the string bass. It's fascinating.

Side two opens with a Charles Mingus rocker, "II BS." It's a typical Mingus number - an eleven piece unit and a deceptively simple riff. It is ultimate Mingus, though, and clearly demonstrates how he can drive ten other musicians into a controlled frenzy.

Oliver Nelson has always been one of the masters of cool, and hearing him and Paul Chambers on this album is a joy. I was sure I was digging an old Beul Niedlinger/Cecil Taylor tune until I realized who I was actually listening to: Nelson on sax; along with Eric Dolphy; soon-to-be-famous trumpeter Freddie Hubbard;Paul Chambers, bass; and Bill Evans, piano. Here the rock solid Chambers walks his band right through one of my favorite Nelson charts and very definitely keeps time.

For all the grief that has gone down between bassist Charlie Haden and Impulse Records, they sure are releasing a lot of his product. Happily, they are once again exposing his epic Song For Che by including it on this new album. This music is straight from the Third World, and features the ace arranging, composition, playing, and production of one of the new masters of the New Music, Mr. Charlie Haden himself. This cut truly transcends space and time.

And how often do we get to hear two great bass players and an absolutely wild rhythm section rocking out to something that feels like it's either from Africa or the Mideast? Well, not very often, unless you listen to Stanley Clarke and Cecil McBee stirring up their visions of Black Unity with Pharoah Sanders. This edited excerpt from the album cut is ultimate audible of the bass solo potentialities in the right hands.

Well, I still haven't mentioned the bass players for Elvin Jones, Archie Shepp, Dewey Redman, and John Coltrane; who include Richard Davis, Reggie Workman, Sirone, and Jimmy Garrison. They are all here, plus a few more, in what has to be the definitive album on the music of jazz bass - good tunes, handsome and inexpensive packaging that will last if you take care of it, some of the top names in modern jazz, intelligent liner notes, and some two and half to three hours of wonderful music. Or, if I may paraphrase Mr. Palmer's closing shot from the lp notes, its most consistent and satisfying quality is that indefinable but indispensable ingredient called soul.