The Legendary Weed Contest of 1975 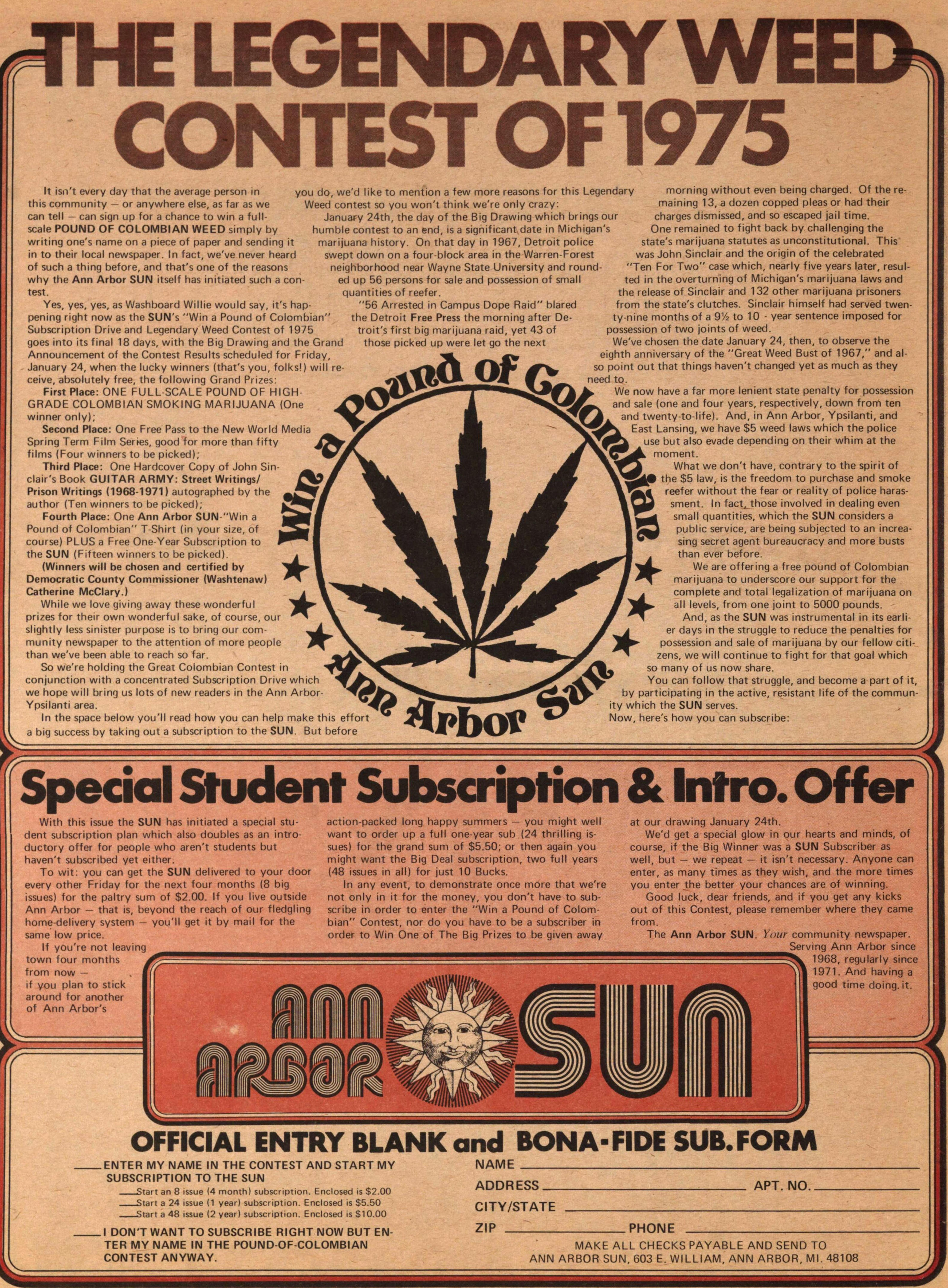 THE LEGENDARY WEED CONTEST OF 1975

It isn't every day that the average person in this community-- or anywhere else, as far as we can tell-- can sign up for a chance to win a full-scale POUND OF COLOMBIAN WEED simply by writing one's name on a piece of paper and sending it in to their local newspaper. In fact, we've never heard of such a thing before, and that's one of the reasons why the Ann Arbor SUN itself has initiated such a contest.

Yes, yes, yes, as Washboard Willie would say, it's happening right now as the SUN's "Win a Pound of Colombian" Subscription Drive and Legendary Weed Contest of 1975 goes into its final 18 days, with the Big Drawing and the Grand Announcement of the Contest Results scheduled for Friday, January 24, when the lucky winners (that's you, folks!) will receive, absolutely free, the following Grand Prizes:

First Place: ONE FULL SCALE POUND OF THE HIGH GRADE COLOMBIAN SMOKING MARIJUANA (One winner only);

Fourth Place: One Ann Arbor SUN "Win a Pound of Colombian" T-shirt (in your size, of course) PLUS a Free One Year Subscription to the SUN (Fifteen winners to be picked).

(Winners will be chosen and certified by Democratic County Commissioner (Washtenaw) Catherine McClary.)

While we love giving away these wonderful prizes for their own wonderful sake, or course, our slightly less sinister purpose is to bring our community newspaper to the attention of more people than we've been able to reach so far.

So we're holding the Great Colombian Contest in conjunction with a concentrated Subscription Drive which we hope will bring us lots of new readers in the Ann Arbor- Ypsilanti area.

In the Space below you'll read how you can help make this effort a big success by taking out a subscription to the SUN. But before you do, we'd like to mention a few more reasons for this Legendary Weed contest so you won't think we're only crazy:

January 24th, the day of the Big Drawing which brings our humble contest to an end, is a significant date in Michigan's marijuana history. On that day in 1967, Detroit police swept down on a four-block area in the Warren-Forest neighborhood near Wayne State University and rounded up 56 person for sale and possession of small quantities of reefer.

"56 Arrest in Campus Dope Raid" blared the Detroit Free Press the morning after Detroit's first big marijuana raid, yet 43 of those picked up were let go the next morning without even being charged. Of the remaining 13, a dozen copped pleas or had their charges dismissed, and so escaped jail time. One remained to fight back by challenging the state's marijuana statues as unconstitutional. This was John Sinclair and the origin of the celebrated "Ten For Two" case which, nearly five years later, resulted in the overturning of Michigan's marijuana laws and the release of Sinclair and 132 other marijuana prisoners from the state's clutches. Sinclair himself had served twenty-nine months of a 9 1/2 to 10- year sentence imposed for possession of two joints of weed.

We've chosen the date January 24, then, to observe the eighth anniversary of the "Great Weed Bust of 1967," and also point out that things haven't changed yet as much as they need to.

We now have a far more lenient state penalty for possession and sale (one and four years, respectively, down from ten and twenty-to-life). And, in Ann Arbor, Ypsilanti, and East Lansing, we have $5 weed laws which the police use but also evade depending on their whim at the moment.

What we don't have, contrary to the spirit of the $5 law, is the freedom to purchase and smoke reefer without the fear or reality of police harassment. In fact, those involved in dealing even small quantities, which the SUN considers a public service, are being subjected to an increasing secret agent bureaucracy and more busts than ever before.

We are offering a free pound of Colombian marijuana to underscore our support for the complete and total legalization of marijuana on all levels, from one joint to 5000 pounds.

And, as the SUN was instrumental in its earlier days in the struggle to reduce the penalties for possession and sale of marijuana by our fellow citizens ,we will continue to fight for that goal which so many of us now share.

You can follow that struggle, and become a part of it, by participating in the active, resistant life of the community which the SUN serves.

With this issue the SUN has initiated a special student subscription plan which also doubles as an introductory offer for people who aren't students but haven't subscribed yet either.

To wit: you can get the SUN delivered to your door every other Friday for the next four months (8 big issues) for the paltry sum of $2.00. If you live outside Ann Arbor-- that is, beyond the reach of our fledgling home-delivery system-- you'll get it by mail for the same low price.

If you're not leaving town four months from now-- if you around for another of Ann Arbor's action-packed long happy summers-- you might well want to order up a full one-year sub (24 thrilling issues) for the grand sum of $5.50; or then again you might want the Big Deal subscription, two full years (48 issues in all) for just 10 bucks.

In any event, to demonstrate once more that we're not only in it for the money, you don't have to subscribe in order to enter the "Win a Pound of Colombian" Contest, nor do you have to be a subscriber in order to Win One of The Big Prizes to be given away at our drawing January 24th.

We'd get a special glow in our hearts and minds, of course, if the Big Winner was a SUN Subscriber as well, but -- we repeat -- it isn't necessary. Anyone can enter, as many times as they wish, and the more times you enter the better your chances are of winning.

Good luck, dear friends, and if you get any kicks out of this Contest, please remember where they came from.

The Ann Arbor SUN. Your community newspaper. Serving Ann Arbor since 1968, regularly since 1971. And having a good time doing it.

Win a Pound of Colombian

Make all checks payable and send to