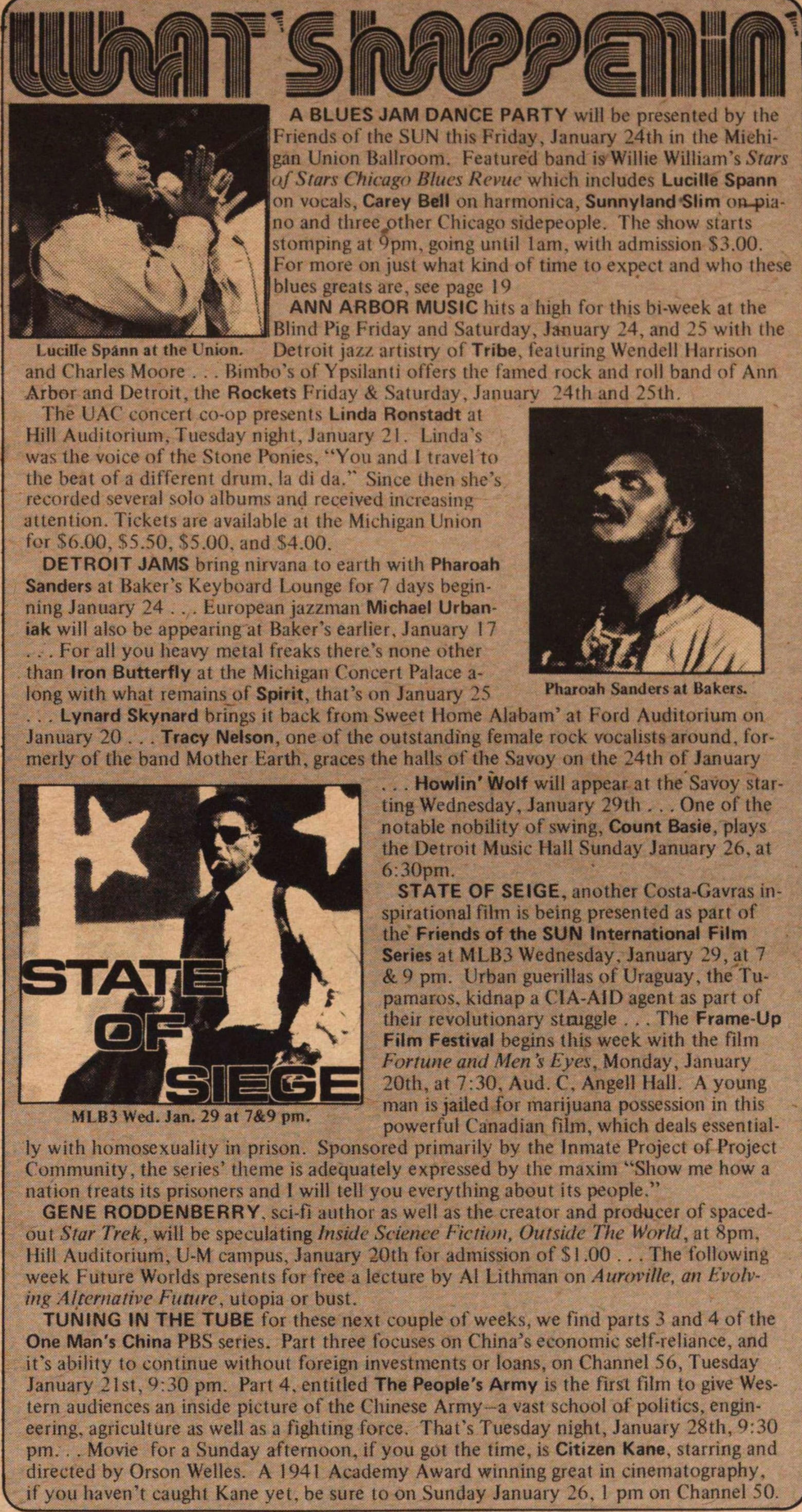 A BLUES JAM DANCE PARTY will be piesented by the Friends of the SUN this Friday, January 24th in the Michigan Union Ballroom. Featured band is Willie William's Stars af Stars Chicago Blues Revue which includes Lucille Spann on vocals. Carey Bell on harmonica, Sunnyland-Slim nu-piano and three other Chicago sidepeople. The sliow starts stomping at 9pm, going until lam. witli admission S3.00. Por more on just what kind of time to expect and who ihese blues greats are, see page 19 ANN ARBOR MUSIC hits a high for this bi-week at the Blind Pig Friday and Saturday, January 24, and 25 with the Detroit ja. urtistry oí Tribe. IVa turing Wendell Harrison and Charles Moore . . . Bimbo's ot ' Ypsilatui otters the famcd rook and roll band of Ann Arbor and Detroit, the Rockets Friday & Saturday, January 24th and 25th. The UAC concert co-op presents Linda Ronstadt at Hill Audi tori uiftj Tuesduy nigJn, January 2 1 . Linda's was the voice of the Stone Ponies. "You and I travel to the beat of a different drum. lu di da." Since then she's recorded several solo albums and received increasing aiiention. Tickets are available at the Michigan Union for $6.00, SS. 50, $5.00. and S4.00. DETROIT JAMS bring nirvana to earth with Pharoah Sanders at Bakers Keyboard Lounge lor 7 days beginning January 24 ... buropean jazman Michael Urbaniak will also be appearing at Baker's earlier, January ! 7 . . . For all you heavy metal freaks there's none other than Iron Butterfly at the Michigan Concert Palace along with what remains of Spirit, that's on January 25 . . . Lynard Skynard brings it back f rom Sweet Home Aiabam' at Ford Auditorium on January 20 ... Tracy Nelson, one oí the outstanding female rock vocalists around, formerly of the band Muthcr Earth, graces the halls ot' the Savoy on the 24th of January . . . Howlin' Wolf will appear at the Sa voy starting Wednesday, January 2')th . . . One of the notable nobility of swing, Count Basie, plays the Detroit Music Mali Sunday January 26, at 6:3()pm. STATE OF SEIGE. another Costa-Gavras inspirational film is being presented as part of the Friends of the SUN International Film Series at MLB3 Wednesday. January 20, at 7 & c pm. llrban guerillas of Uraguay, the Tupamaros, kidnap a CIA-A1D agent as part of their revolutionary stmggle . . . The Frame-Up Film Festival begin.s this week with the film Fortune atul Men 's Eyes, Monday, January 2Oth, at 7:30. Aud. C, Angelí Hall. A young man is jaiied for marijuana possession in this powerful (.anadian film, which deals iy with homoscxuulity in prison. Sponsored primarily by the Inmate Project of Project Community, the series' theme isadequately expressed by the maxim "Show me how a nation treats its prisoners and I will teil you everything about its people." GENE RODDENBERRY. sci-fi author as well as the creator and producer of spacedout Star Trek, will be speculating Insidc Science hielion, Outsidc The World, at 8pm. Hill Auditorium, U-M campus, January 2Oth tbr admission of SI .00 . . . The foltowing week Future Worlds presents for free a lécture by Al Lithman on Auroville, an t'volving Alternativo Future, utopia or bust. TUNING IN THE TUBE for these next couple of weeks, we find parts 3 and 4 of the One Man's China PBS series. Part three focuses on China's economie self-reliance, and it's ability to continue without foreign investments or loans, on Channel 56, Tuesday January 21st, 4:30 pm. Part 4, entitled The People's Army is the first film to give Western audiences an inside picture of the Chinese Army a vast school of politics, engineering, agriculture as well as a fighting forcé. Thafs Tuesday night, January 28th, 9:30 pm. . . Movie for a Sunday aftemoon, if you got the time, is Citizen Kane. starring and directed by Orson Welles. A 1941 Academy Award winning great in cinematography, if you haven't caughi Kane yet, be sure to on Sunday January 26, I pm on Channel 50.