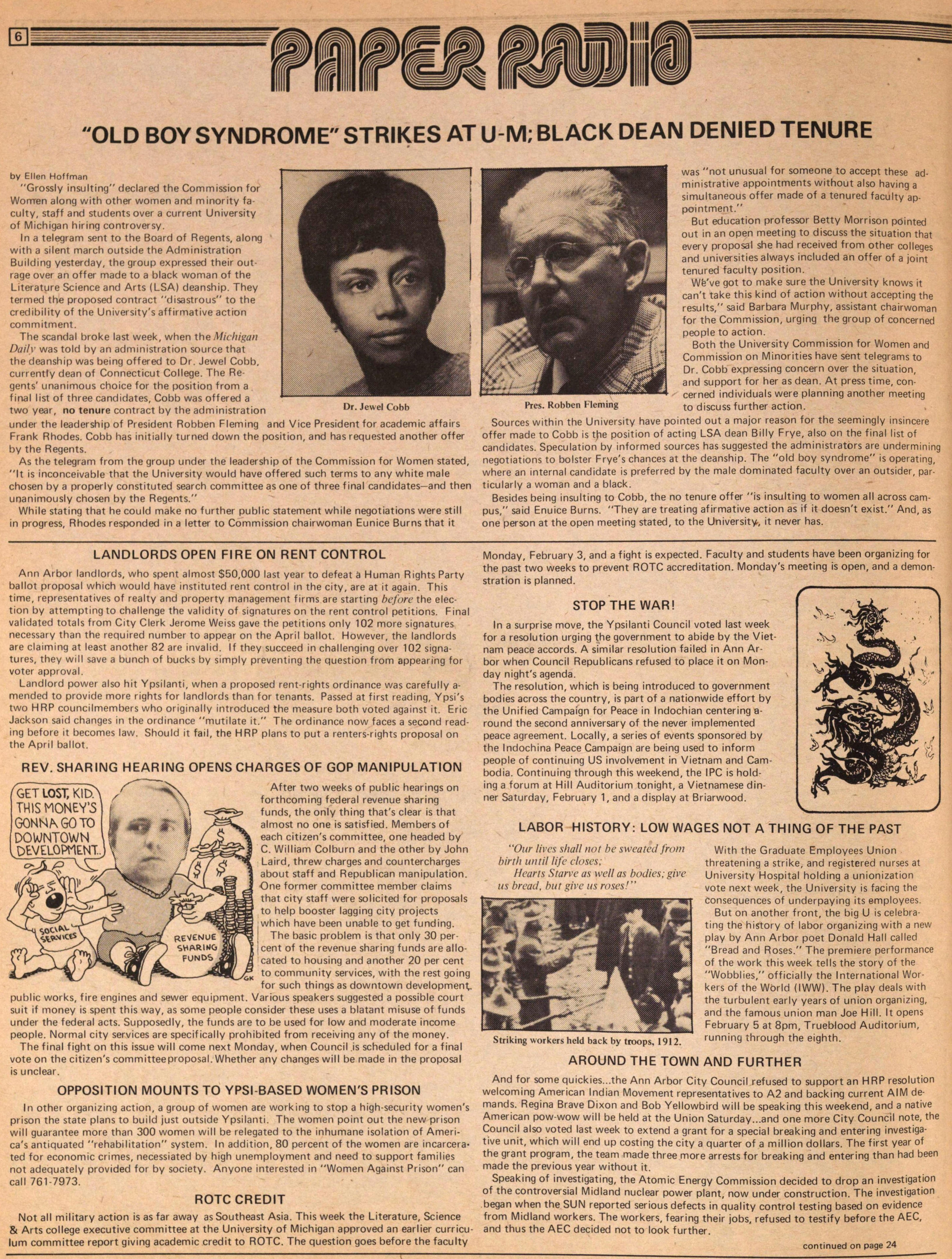 "Grossly insulting" declared the Commission for Women along with other women and minority faculty, staff and students over a current University of Michigan hiring controversy.

In a telegram sent to the Board of Regents, along with a silent march outside the Administration Building yesterday, the group expressed their outrage over an offer made to a black woman of the Literature Science and Arts (LSA) deanship. They termed the proposed contract "disastrous" to the credibility of the University's affirmative action commitment.

The scandal broke last week, when the Michigan Daily was told by an administration source that the deanship was being offered to Dr. Jewel Cobb, currently dean of Connecticut College. The Regents' unanimous choice for the position from a final list of three candidates, Cobb was offered a two year, no tenure contract by the administration under the leadership of President Robben Fleming and Vice President for academic affairs Frank Rhodes. Cobb has initially turned down the position, and has requested another offer by the Regents.

As the telegram from the group under the leadership of the Commission for Women stated, "It is inconceivable that the University would have offered such terms to any white male chosen by a properly constituted search committee as one of three final candidates- and then unanimously chosen by the Regents."

While stating that he could make no further public statement while negotiations were still in progress, Rhodes responded in a letter to Commission chairwoman Eunice Burns that it was "not unusual for someone to accept these administrative appointments without also having a simultaneous offer made of a tenured faculty appointment."

But education professor Betty Morrison pointed out in an open meeting to discuss the situation that every proposal she had received from other colleges and universities always included an offer of a joint tenured faculty position.

We've got to make sure the University knows it can't take this kind of action without accepting the results," said Barbara Murphy, assistant chairwoman for the Commission, urging the group of concerned people to action.

Both the University Commission for Women and Commission on Minorities have sent telegrams to Dr. Cobb expressing concern over the situation, and support for her as dean. At press time, concerned individuals were planning another meeting to discuss further action.

Sources within the University have pointed out a major reason for the seemingly insincere offer made to Cobb is the position of acting LSA dean Billy Frye, also on the final list of candidates. Speculation by informed sources has suggested the administrators are undermining negotiations to bolster Frye's chances at the deanship. The "old boy syndrome" is operating, where an internal candidate is preferred by the male dominated faculty over an outsider, particularly a woman and a black.

Besides being insulting to Cobb, the no tenure offer "is insulting to women all across campus," said Eunice Burns. "They are treating affirmative action as if t doesn't exist." And, as one person at the open meeting stated, to the University, it never has.

Ann Arbor landlords, who spent almost $50,000 last year to defeat a Human Rights Party ballot proposal which would have instituted rent control in the city, are at it again. This time, representatives of realty and property management firms are starting before the election by attempting to challenge the validity of signatures on the rent control petitions. Final validated totals from City Clerk Jerome Weiss gave the petitions only 102 more signatures necessary than the required number to appear on the April ballot. However, the landlords are claiming at least another 82 are invalid. If they succeed in challenging over 102 signatures, they will save a bunch of bucks by simply preventing the question from appearing for voter approval.

Landlord power also hit Ypsilanti, when a proposed rent-rights ordinance was carefully amended to provide more rights for landlords than for tenants. Passed at first reading, Ypsi's two HRP council members who originally introduced the measure both voted against it. Eric Jackson said changes in the ordinance "mutílate it." The ordinance now faces a second reading before it becomes law. Should it fail, the HRP plans to put a renters-rights proposal on the April ballot.

After two weeks of public hearings on forthcoming federal revenue sharing funds, the only thing that's clear is that almost no one is satisfied. Members of each citizen's committee, one headed by C. William Colburn and the other by John Laird, threw charges and countercharges about staff and Republican manipulation. One former committee member claims that city staff were solicited for proposals to help booster lagging city projects which have been unable to get funding.

The basic problem is that only 30 percent of the revenue sharing funds are allocated to housing and another 20 per cent to community services, with the rest going for such things as downtown development, public works, fire engines and sewer equipment. Various speakers suggested a possible court suit if money is spent this way, as some people consider these uses a blatant misuse of funds under the federal acts. Supposedly, the funds are to be used for low and moderate income people. Normal city services are specifically prohibited from receiving any of the money.

The final fight on this issue will come next Monday, when Council is scheduled for a final vote on the citizen's committee proposal. Whether any changes will be made in the proposal is unclear.

In other organizing action, a group of women are working to stop a high-security women's prison the state plans to build just outside Ypsilanti. The women point out the new prison will guarantee more than 300 women will be relegated to the inhumane isolation of America's antiquated "rehabilitation" system. In addition, 80 percent of the women are incarcerated for economic crimes, necessitated by high unemployment and need to support families not adequately provided for by society. Anyone interested in "Women Against Prison" can call 761-7973.

Not all military action is as far away as Southeast Asia. This week the Literature, Science & Arts college executive committee at the University of Michigan approved an earlier curriculum committee report giving academic credit to ROTC. The question goes before the faculty Monday, February 3, and a fight is expected. Faculty and students have been organizing for the past two weeks to prevent ROTC accreditation. Monday's meeting is open, and a demonstration is planned.

In a surprise move, the Ypsilanti Council voted last week for a resolution urging the government to abide by the Vietnam peace accords. A similar resolution failed in Ann Arbor when Council Republicans refused to place it on Monday night's agenda.

The resolution, which is being introduced to government bodies across the country, is part of a nationwide effort by the Unified Campaign for Peace in Indochina centering around the second anniversary of the never implemented peace agreement. Locally, a series of events sponsored by the Indochina Peace Campaign are being used to inform people of continuing US involvement in Vietnam and Cambodia. Continuing through this weekend, the UPC is holding a forum at Hill Auditorium tonight, a Vietnamese dinner Saturday, February 1, and a display at Briarwood.

LABOR HISTORY: LOW WAGES NOT A THING OF THE PAST

With the Graduate Employees Union threatening a strike, and registered nurses at University Hospital holding a unionization vote next week, the University is facing the consequences of underpaying its employees.

But on another front, the big U is celebrating the history of labor organizing with a new play by Ann Arbor poet Donald Hall called "Bread and Roses." The premiere performance of the work this week telIs the story of the "Wobblies," officially the International Workers of the World (IWW). The play deals with the turbulent early years of union organizing, and the famous union man Joe Hill. It opens February 5 at 8pm, Trueblood Auditorium, running through the eighth.

AROUND THE TOWN AND FURTHER

And for some quickies...the Ann Arbor City Council refused to support an HRP resolution welcoming American Indian Movement representatives to A2 and backing current AIM demands. Regina Brave Dixon and Bob Yellowbird will be speaking this weekend, and a native American powwow will be held at the Union Saturday ...and one more City Council note, the Council also voted last week to extend a grant for a special breaking and entering investigative unit, which will end up costing the city a quarter of a million dollars. The first year of the grant program, the team made three more arrests for breaking and entering than had been made the previous year without it.

Speaking of investigating, the Atomic Energy Commission decided to drop an investigation of the controversial Midland nuclear power plant, now under construction. The investigation began when the SUN reported serious defects in quality control testing based on evidence from Midland workers. The workers, fearing their jobs, refused to testify before the AEC, and thus the AEC decided not to look further.

"Our lives shall not be sweater from birth until life closes;

Hearts Starve as well as bodies, give us bread us bread, but give us roses!"

Nuclear power isn't the only problem of the utility companies. High rates and poor service are frequent customer complaints, and now a special complaint line has been the state's Public Utilities Commission. You can complain free by calling 92-9555.

If the environment is your concern, a movement is afoot to ban aerosol cans. Sponsored by the Clean Air Movement, the initial effort is a boycott against all products in aerosol cans, including insecticides, deodorant, and shaving cream. Petitions supporting the boycott are available from the Ecology Center...

At Eastern Michigan, a program is being instituted in the dorms to prevent food waste. "Food Ecology" tries to get students to eat the food they take, cutting dorm costs and food waste... or try riding Dial-A-Ride to stop air pollution and energy waste. The purple vans have added servicing to the north side of Ann Arbor for door-to-door service.