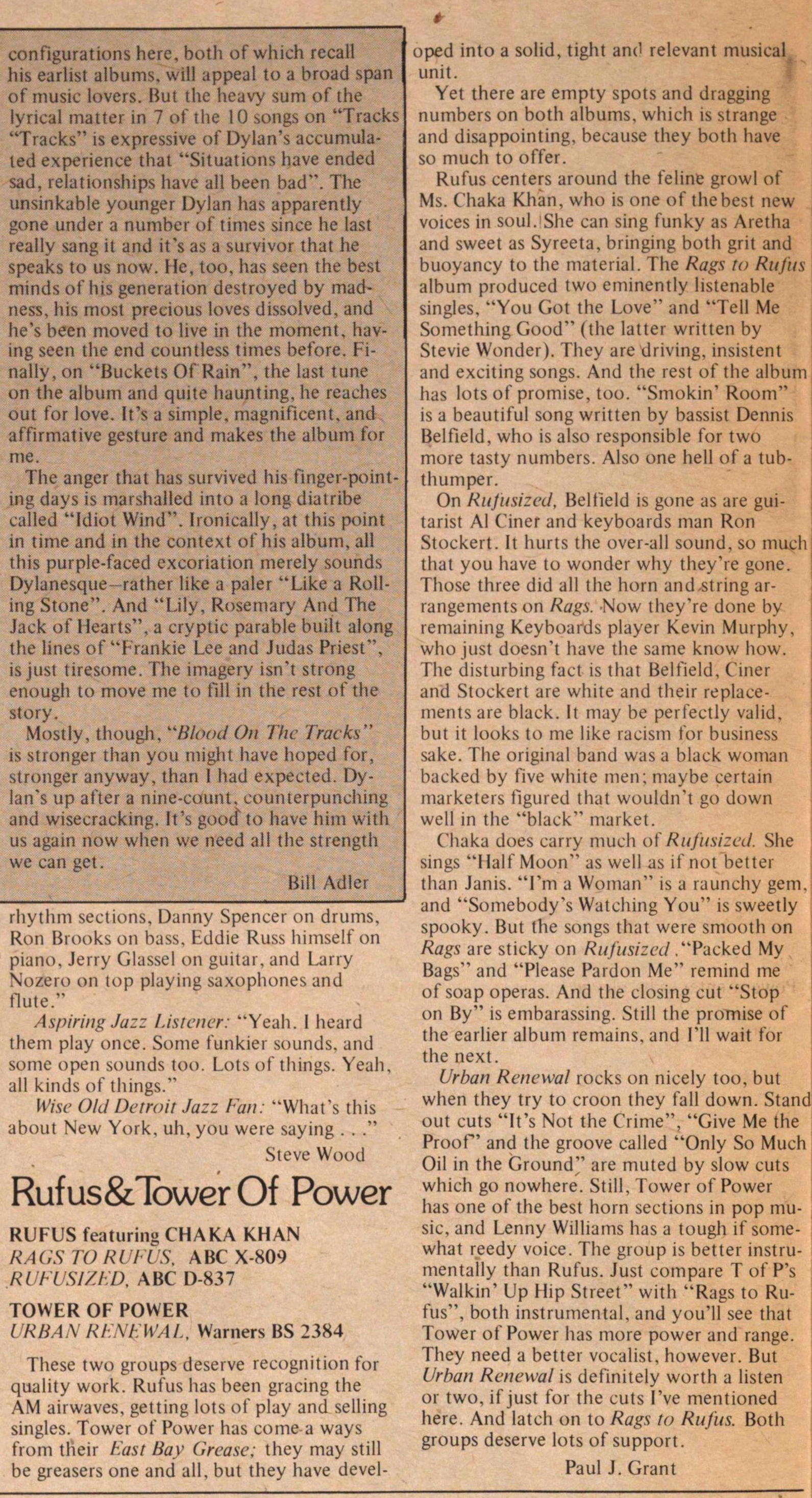 RUFUS featuring CHA KA KHAN RA GS TO RUFUS, ABC X-809 RUFUSIZbD, ABC D-837 TOWER OF POWER URBAN RENEWAL, Warners BS 2384 These two groups deserve recognition for quality work. Rufus has been gracing the AM airwaves, getling lots of play and selling singles. Tower of Power has come a ways from their East Bay (Irease; they may still be greasers one and all, but they have oped into a solid, tight and relevant musical unit. Yet there are empty spots and dragging numbers on both albums, which is strange and disappointing, because they both have so much to offer. Rufus centers around the feline growl of Ms. Chaka Khan, who is one o f the best new voices in soul.'She can sing funky as Aretha and sweet as Syreeta, bringing both grit and buoyancy to the material. The Rags to Rufus album produced two eminently listenable singles, "You Got the Love" and "Teil Me Something Good" (the latter written by Stevie Wonder). They are driving, insistent and exciting songs. And the rest of the album has lots of promise, too. "Smokin' Room" is a beautiful song written by bassist Dennis Belfield, who is also responsible for two more tasty numbers. Also one heil of a tubthumper. On Rufusized, Beltïeld is gone as are guitarist Al Ciner and keyboards man Ron Stockerf. lt huns the over-all sound, so nnich that you have to wonder why they're gone. Those three did all the hom and stringarrangementson Rags. Now they're done by remaining Keyboards player Kevin Murphy, who just doesn't have the same know how. The disturbing fact is that Belfield, Ciner and Stockert are white and their replacementsare black, lt may be perfectly valid, but it looks to me like racism for business sake. The original band was a black woman backed by five white men; maybe certain marketers figured that wouldn't go down wcll in the "black" market. Chaka does carry much of Rufusized. She sings "Half Moon" as well as if not better than Janis. "l'm a Woman" is a raunchy gem. and "Somebody's Watching You" is sweetly spooky. But the songs that were smooth on Rags are sticky on Rufusized ."Packed My Bags" and "Please Pardon Me" remind me of soap operas. And the closing cut "Stop on By" is embarassing. Still the promise of the earlier album remains. and I'll wait for the next. Urban Renewal rocks on nicely too, but when they try to croon they fall down. Stand out cuts "It's Not the Crime", "Give Me the Proof' and the groove called "Only So Much Oil in the Ground" are muted by slow cuts which go nowhere. Still, Tower of Power has one of the best hom sections in pop music, and Lenny Williams has a tough if somewhat reedy voice. The group is better instrumentally than Rufus. Just compare T of P's "Walkin' Up Hip Street" with "Rags to Rufus", both instrumental, and you'U see that Tower of Power has more power and range. They need a better vocalist, however. But Urban Renewal is definitely worth a listen or two, if just for the cuts l've mentioned here. And latch on to Rags to Rufus. Both groups deserve lots of support.