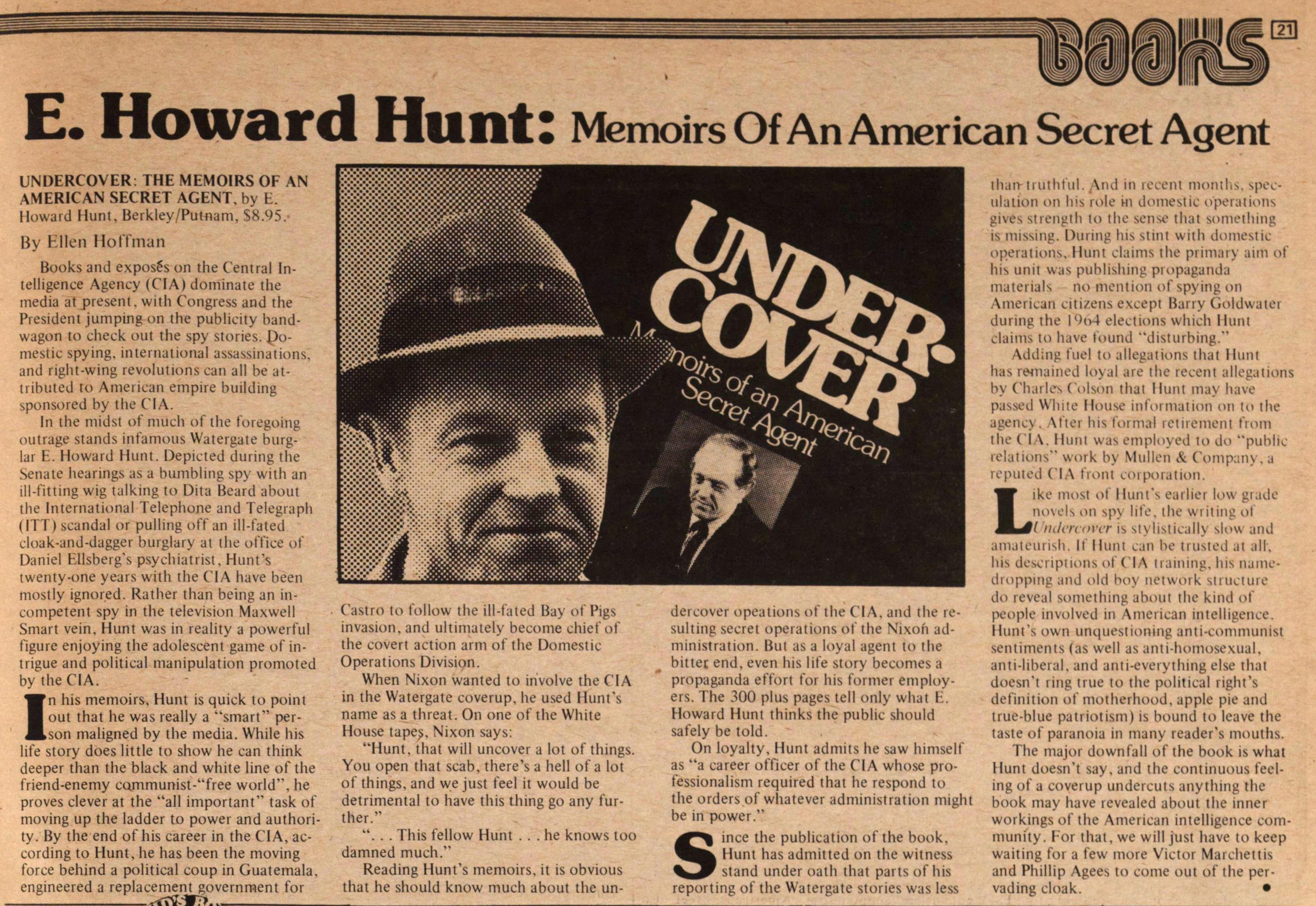 UNDERCOVER: THE MEMOIRS OF AN AMERICAN SECRET AGENT, by E. Howard Hunt, Berkley/Putnam, $8.95.

Books and exposés on the Central Intelligence Agency (CIA) dominate the media at present, with Congress and the President jumping on the publicity bandwagon to check out the spy stories. Domestic spying, international assassinations, and right-wing revolutions can all be attributed to American empire building sponsored by the CIA.

In the midst of much of the foregoing outrage stands infamous Watergate burglar E. Howard Hunt. Depicted during the Senate hearings as a bumbling spy with an ill-fitting wig talking to Dita Beard about the International Telephone and Telegraph (ITT) scandal or pulling off an ill-fated cloak-and-dagger burglary at the office of Daniel Ellsberg's psychiatrist, Hunt's twenty-one years with the CIA have been mostly ignored. Rather than being an incompetent spy in the television Maxwell Smart vein, Hunt was in reality a powerful figure enjoying the adolescent game of intrigue and political manipulation promoted by the CIA.

In his memoirs, Hunt is quick to point out that he was really a "smart" person maligned by the media. While his life story does little to show he can think deeper than the black and white line of the friend - enemy communist - "free world", he proves clever at the "all important" task of moving up the ladder to power and authority. By the end of his career in the CIA, according to Hunt, he has been the moving force behind a political coup in Guatemala, engineered a replacement government for Castro to follow the ill-fated Bay of Pigs invasion, and ultimately become chief of the covert action arm of the Domestic Operations Division.

When Nixon wanted to involve the CIA in the Watergate coverup, he used Hunt's name as a threat. On one of the White House tapes, Nixon says:

"Hunt, that will uncover a lot of things. You open that scab, there's a hell of a lot of things, and we just feel it would be detrimental to have this thing go any further."

Reading Hunt's memoirs, it is obvious that he should know much about the undercover operations of the CIA, and the resulting secret operations of the Nixon administration. But as a loyal agent to the bitter end, even his life story becomes a propaganda effort for his former employers. The 300 plus pages tell only what E. Howard Hunt thinks the public should safely be told.

On loyalty, Hunt admits he saw himself as "a career officer of the CIA whose protessionalism required that he respond to the orders of whatever administration mighl be in power."

Since the publication of the book, Hunt has admitted on the witness stand under oath that parts of his reporting of the Watergate stories was less than truthful. And in recent months, speculation on his role in domestic operations gives strength to the sense that something is missing. During his stint with domestic operations, Hunt claims the primary aim of his unit was publishing propaganda materials - no mention of spying on American citizens except Barry Goldwater during the 1964 elections which Hunt claims to have found "disturbing."

Adding fuel to allegations that Hunt has remained loyal are the recent allegations by Charles Colson that Hunt may have passed White House information on to the agency . After his formal retirement from the CIA, Hunt was employed to do "public relations" work by Mullen & Company, a reputed CIA front corporation.

Like most of Hunt's earlier low grade novels on spy life, the writing ot Undercover is stylistically slow and amateurish. If Hunt can be trusted at all, the descriptions of CIA training, his name-dropping and old boy network structure do reveal something about the kind of people involved in American intelligence. Hunt's own unquestioning anti-communism sentiments (as well as anti-homosexual, anti-liberal, and anti-everything else that doesn't ring true to the political right's definition of motherhood, apple pie and true-blue patriotism) is bound to leave the taste of paranoia in many reader's mouths.

The major downfall of the book is what Hunt doesn't say, and the continuous feeling of a coverup undercuts anything the book may have revealed about the inner workings of the American intelllgence community. For that, we will just have to keep waiting tor a few more Victor Marchettis and Phillip Agees to come out of the pervading cloak.