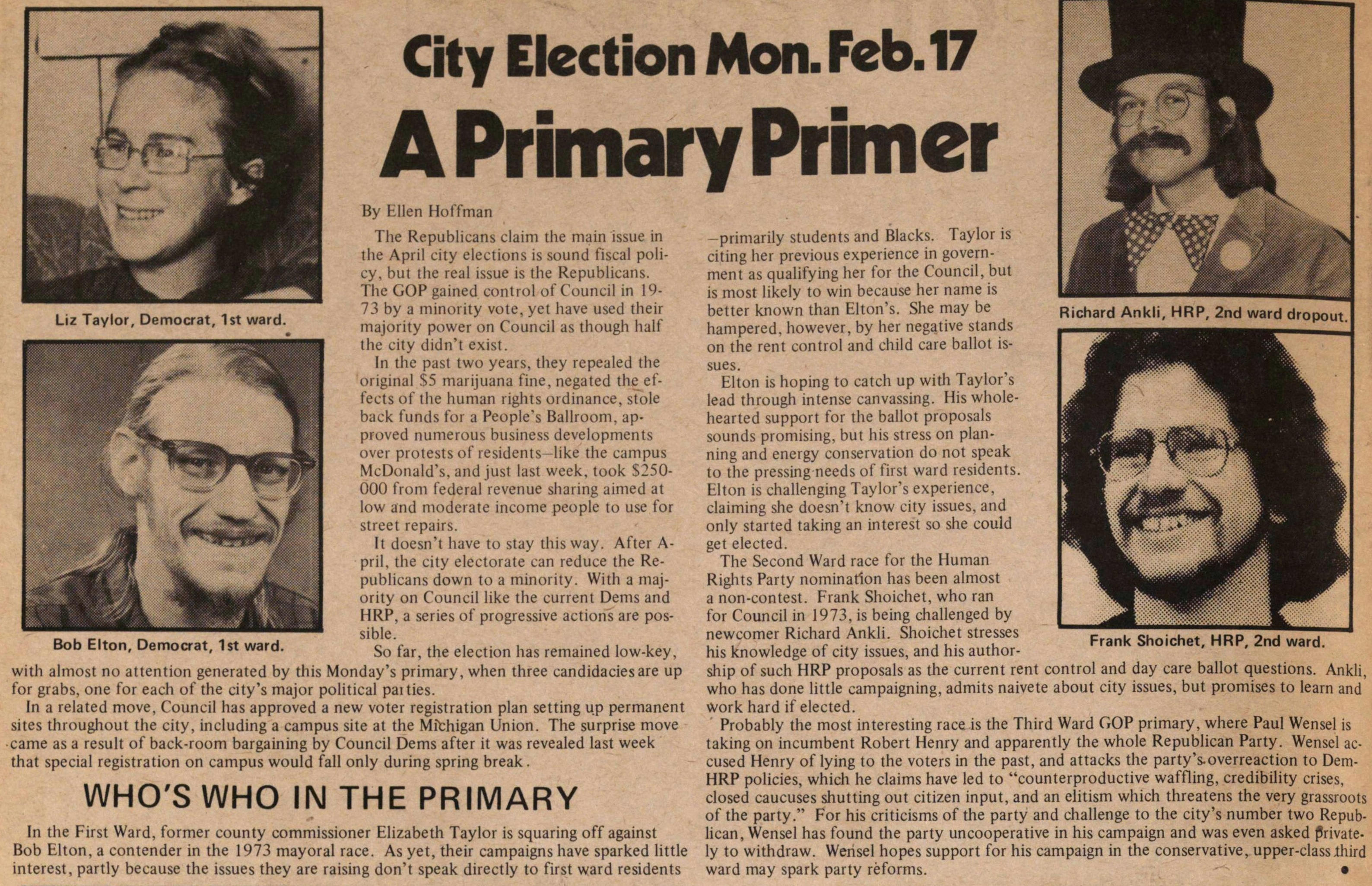 The Republicans claim the main issue in the April city elections is sound fiscal policy, but the real issue is the Republicans. The GOP gained control of Council in l1)73 by a minority vote, yet have used their majority power on Council as though half the city didn't exist. In the past two years, they repealed the original $5 marijuana fine, negated theeffects of the human rights ordinance, stole batk funds for a People's Ballroom, approved numerous business developments over protests of residents -like the campus McDonald's, and just last week. took S25O000 from federal revenue sharing aimed at low and moderate income people to use for street repairs. It doesn't have to stay this way. After April. the city electorate can reduce the Republicans down to a minority. With a majority on Council like the current Dems and HRP, a series of progressive actions are possible. So far, the election has remained low-key, with almost no attention generated by this Monday's primary, when three candidaciesare up for grabs, one for each of the city's major political paities. In a related move, Council has approved a new voter registration plan setting up permanent sites throughout the city, including a campus site at the Mithigan Union. The surprise move carne as a result of back-room bargaining by Council Dems after it was revealed last week that special registration on campus would fall only during spring break. WHO'S WHO IN THE PRIMARY In the First Ward, former county commissioner Elizabeth Taylor is squaring off against Bob Elton, a contender in the 1973 mayoral race. As yet, their campaigns have sparked little interest, partly because the issues they are raising don't speak directly to first ward residents - primarily students and Blacks. Taylor is citing lier previous experience in government as qualifying her for the Council, but is most likely to win because her name is better known than Elton's. She may be hampered, however, by her negative stands on the rent control and child care ballot issues. Elton is hoping to catch up with Taylor's lead through intense canvassing. His wholehearted support for the ballot proposals sounds promising, but his stress on planning and energy conservation do not spcak to the pressing needs of first ward residents. Elton is challenging Taylor's experience, claiming she doesn't know city issues, and only started taking an interest so she could get elected. The Second Ward race for the Human Riglits Party nomination has been almost a non-contest. Frank Shoichet, who ran for Council in 1973, is being challenged by newcomer Richard Ankli. Shoichet stresses his knowledee of city issues, and his ship of such HRP proposals as the current rent control and day care ballot questions. Ankli, who has done Hule campaigning, admits naivete about city issues, but promises to learn and work hard if elected. Probably the most interesting race is the Third Ward GOP primary, where Paul Wensel is taking on incumbent Robert Henry and apparently the whole Republican Party. Wensel accused Henry of lying to the voters in the past, and attacks the party's-overreaction to DemHRP policies, which he claims have led to "counterproductive waffling, credibility crises, closed caucuses shutting out citizen input, and an elitism which threatens the very grassroots of the party." For his criticisms of the party and challenge to the city's number two Republican, Wensel has found the party uncooperative in his campaign and was even asked Privately to withdraw. Wensel hopes support for his campaign in the conservative, upper-class .third ward may spark party rèforms.