Exclusive Interview with an EX-NARC Pulling Off the Undercovers 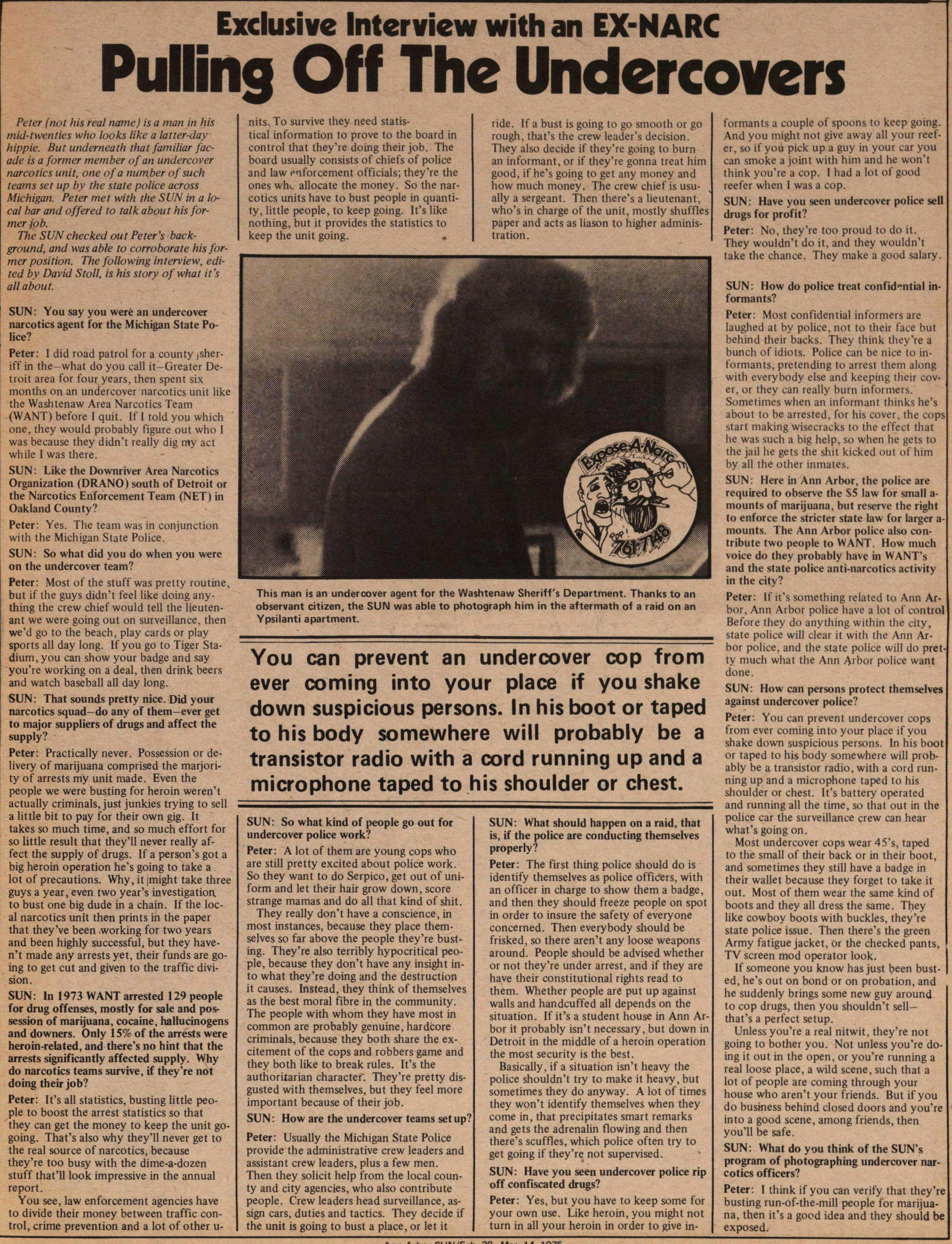 Peter (not his real name) is a man in his mid-twenties who looks like a latter-day hippie. But underneath that familiar facade is a former member of an undercover narcotics unit, one of a number of such teams set up by the state police across Michigan. Peter met with the SUN in a local bar and offered to talk about his former job.

The SUN checked out Peter's background and was able to corroborate his former position. The following interview, edited by David Stoll, is his story of what it's all about.

SUN: You say you were an undercover narcotics agent for the Michigan State Police?

Peter: I did road patrol for a county sheriff in the -- what do you call it -- Greater Detroit area for four years, then spent six months on an undercover narcotics unit like the Washtenaw Area Narcotics Team (WANT) before I quit. If I told you which one, they would probably figure out who I was because they didn't really dig my act while I was there.

SUN: Like the Downriver Area Narcotics Organization (DRANO) south of Detroit or the Narcotics Enforcement Team (NET) in Oakland County?

Peter: yes. The team was in conjunction with the Michigan State Police.

SUN: so what did you do when you were on the undercover team?

Peter: Most of the stuff was pretty routine, but if the guys didn't feel like doing anything the crew chief would tell the lieutenant we were going out on surveillance, then we'd go to the beach, play cards, or play sports all day long. If you go to Tiger Stadium, you can show your badge and say you're working on a deal, then drink beers and watch baseball all day long.

SUN: That sounds pretty nice. Did your narcotics squad - do any of them -- ever get to major suppliers of drugs and affect the supply?

Peter: Practically never. Possession or delivery of marijuana comprised the majority of arrests my unit made. Even the people we were busting for heroin weren't actually criminals, just junkies trying to sell a little bit to pay for their own gig. It takes so much time and so much effort for so little results that they'll never really affect the supply of drugs. If a person's got a big heroin operation he's going to take a lot of precautions. Why, it might take three guys a year, even two year's investigation, to bust one big dude in a chain. If the local narcotics unit then prints in the paper that they've been working for two years and been highly successful, but they haven't made any arrests yet, their funds are going to get cut and given to the traffic division.

SUN: In 1973 WANT arrested 129 people for drug offenses, mostly for sale and possession of marijuana, cocaine, hallucinogens, and downers. Only 15% of the arrests were heroin-related, and there's no hint that the arrests significantly affected supply. Why do narcotics teams survive, if they're not doing their job?

Peter: It's all statistics, busting little people to boost the arrest statistics so that they can get the money to keep the unit going. That's also why they'll never get to the real source of narcotics, because they're too busy with the dime-a-dozen stuff that'll look impressive in the annual report.

You see, law enforcement agencies have to divide their money between traffic control, crime prevention and a lot of other units. To survive they need statistical information to prove to the board in control that they're doing their job. The board usually consists of chiefs of police and law enforcement officials; they're the ones who allocate the money. So the narcotics units have to bust people in quantity, little people, to keep going. It's like nothing, but it provides the statistics to keep the unit going.

SUN: So what kind of people go out for undercover police work?

Peter: A lot of them are young cops who are still pretty excited about police work. So they want to do Serpico, get out of uniform, and let their hair grow down, score strange mamas and do all that kind of shit.

They don't really have a conscience, in most instances, because they place themselves so far above the people they're busting. They're also terribly hypocritical people because they don't have any insight into what they're doing and the destruction it causes. Instead, they think of themselves as the best moral fiber in the community. The people with whom they have most in common are probably genuine, hardcore criminals because they both share the excitement of the cops and robbers game and they both like to break the rules. It's the authoritarian character. They're pretty disgusted with themselves, but they feel more important because of their job.

SUN: How are undercover teams set up?

Peter: Usually the Michigan State Police provide the administrative crew leaders and assistant crew leaders, plus a few men. Then they solicit help from the local county and city agencies, who also contribute people. Crew leaders head surveillance, assign cars, duties, and tactics. They decide if the unit is going to bust a place, or let it ride. If a bust is going to go smooth or go rough, that's the crew leader's decision. They also decide if they're going to burn an informant or if they're gonna treat him good, if he's going to get any money and how much money. The crew chief is usually a sergeant. Then there's a lieutenant, who's in charge of the unit, mostly shuffles paper and acts as liaison to higher administraiton.

SUN: What should happen on a raid, that is, if the police are conducting themselves properly?

Peter: the first thing police should do is identify themselves as police officers, with an office in charge to show them a badge, and then they should freeze people on spot in order to ensure the safety of everyone concerned. Then everybody should be frisked so there aren't any loose weapons around. People should be advised whether or not they're under arrest, and if they are, have their constitutional rights read to them. Whether people are put up against walls and handcuffed all depends on the situation. If it's a student house in Ann Arbor it probably isn't necessary, but down in Detroit in the middle of a heroin operation, the most security is best.

Basically, if a situation isn't heavy the police shouldn't try to  make it heavy, but sometimes they do anyway. A lot of times they won't identify themselves when they come in, that precipitates smart remarks and gets the adrenalin flowing and then there's scuffles, which police often try to get going if they're not supervised.

SUN: Have you seen undercover police rip off confiscated drugs?

Peter: Yes, but you have to keep some for your own use. Like heroin, you might not turn in all your heroin in order to give informants a couple of spoons to keep going. And you might not give away all your reefer, so if you pick up a guy in your car you can smoke a join with him and he won't think you're a cop. I had a lot of good reefer when I was a cop.

SUN: Have you seen undercover police sell drugs for profit?

Peter: No, they're too proud to do it. They wouldn't do it, and they wouldn't take the chance. They make a good salary.

Peter: Most confidential informers are laughed at by police, not to their face but behind their backs. They think they're a bunch of idiots. Police can be nice to informants, pretending to arrest them along with everybody else and keeping their cover, or they can really burn informers. Sometimes when an informant thinks he's about to be arrested, for his cover, the cops start making wisecracks to the effect that he was such a big help, so when he gets to the jail he gets the shit kicked out of him by all the other inmates.

SUN: Here in Ann Arbor, the police are required to observe the $5 law for small amounts of marijuana, but reserve the right to enforce stricter state law for larger amounts. The Ann Arbor police also contribute two people to WANT. How much voice do they probably have in WANT's and the state police anti-narcotics activity in the city?

SUN: How can persons protect themselves against undercover police?

Peter: you can prevent undercover cops from ever coming into your place if you shake down suspicious persons. In his boot or taped to his body somewhere will probably be a transistor radio, with a cord running up and a microphone taped to his shoulder or chest. It's battery operated and running all the time, so that our in the police car the surveillance crew can hear what's going on.

Most undercover cops wear 45's, taped to the small of their back or in their boot, and sometimes they still have a badge in their wallet because they forgot to take it out. Most of them wear the same kind of boots and they all dress the same. They like cowboy boots with buckles, they're state police issue. Then there's the green Army fatigue jacket, or the checked pants, TV screen mod operator look.

If someone you know has just been busted, he's out on bond or on probation, and he suddenly brings some new guy around to cop drugs, then you shouldn't sell -- that's a perfect setup.

Unless you're a real nitwit, they're not going to bother you. They're not going to bother you. Not unless you're doing it out in the open, or you're running a real loose place, a wild scene, such that a lot of people are coming through your house who aren't your friends. But if you do business behind closed doors and you're in a good scene, among friends, then you'll be safe.

SUN: What do you think of the SUN's program of photographing undercover narcotics officers?

Peter: I think if you can verify that they're busting run-of-the-mill people for marijuana, then it's a good idea and they should be exposed.