The Birth of a Culture & the Greening of 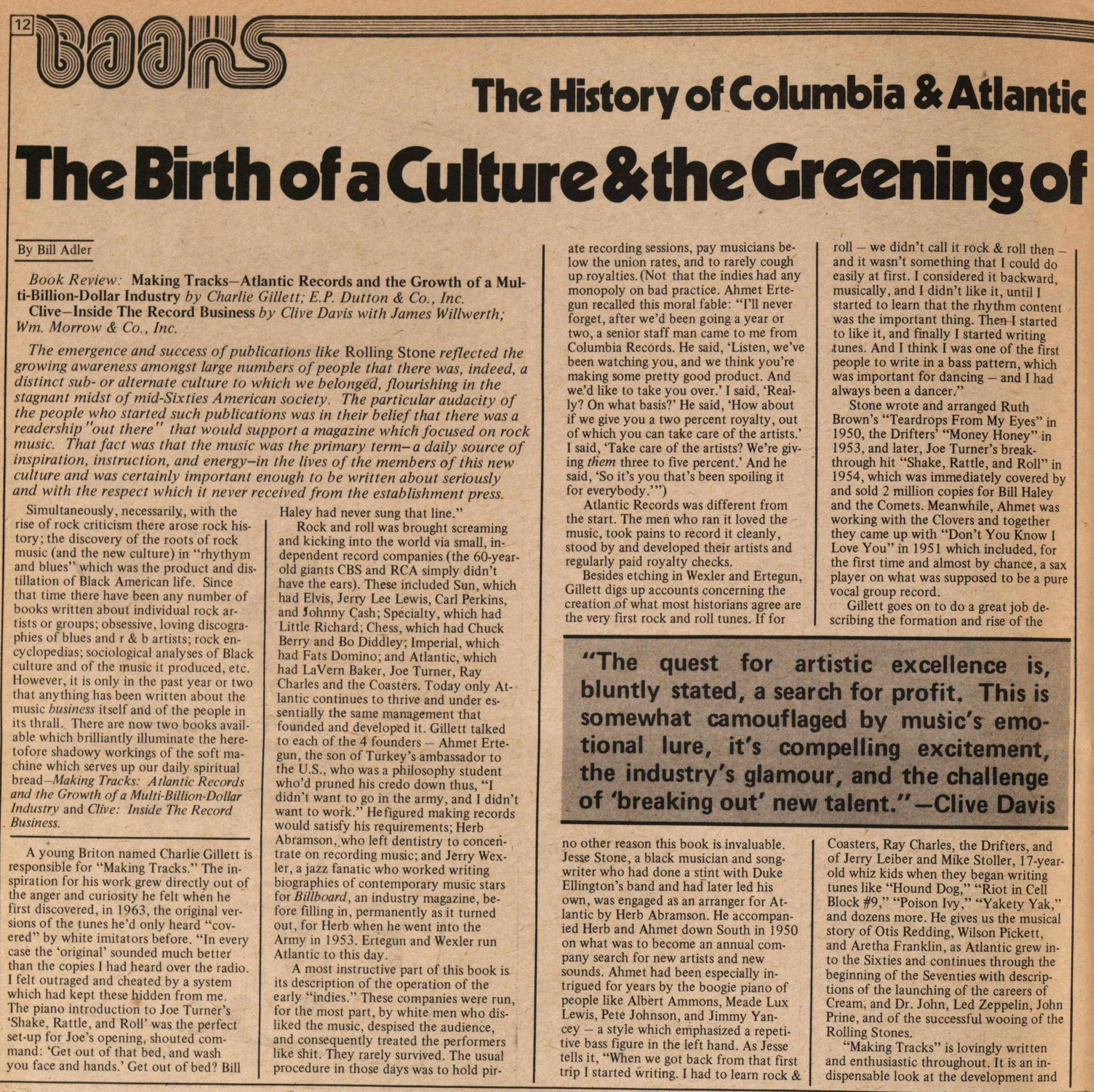 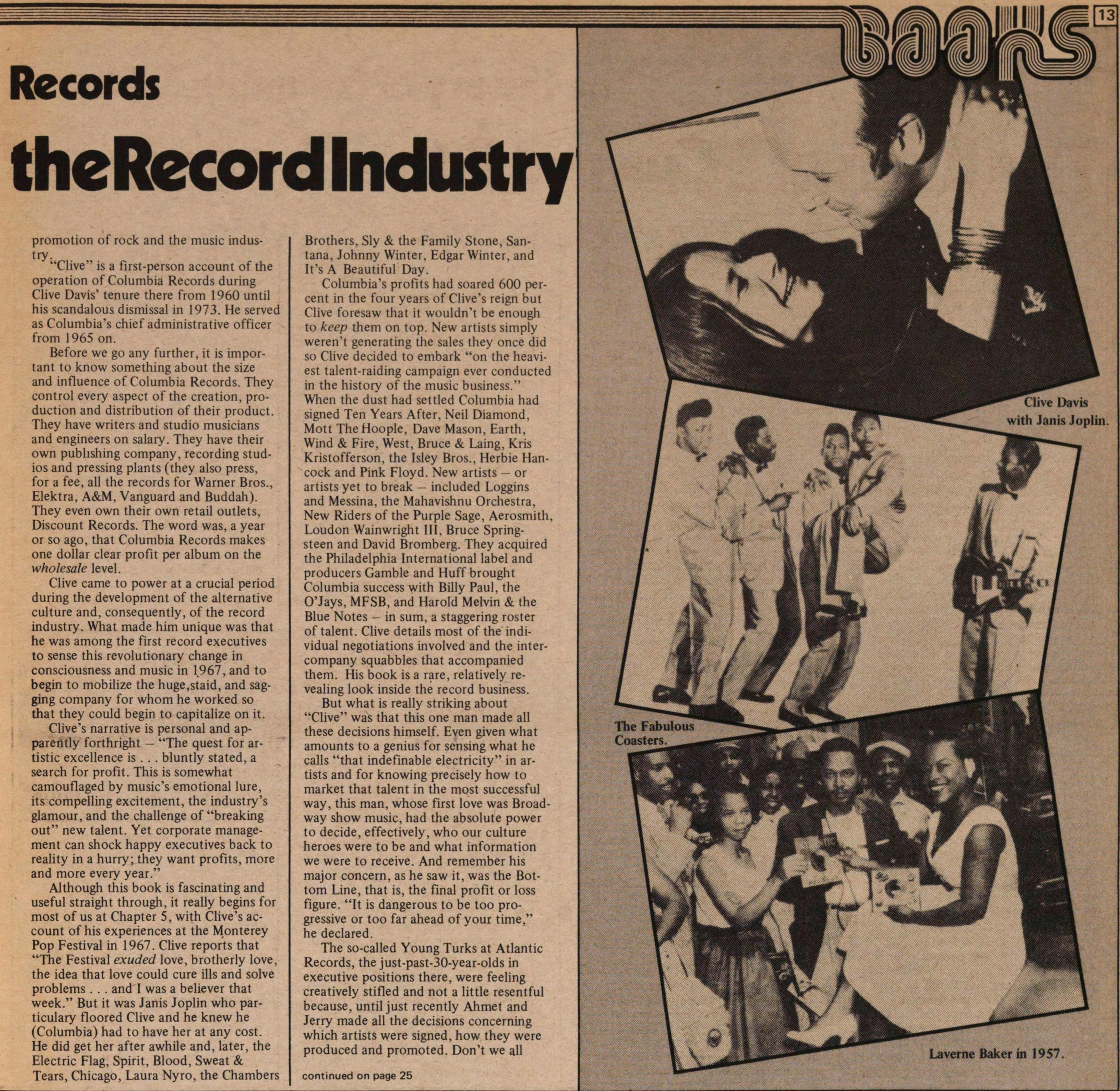 The emergence and success of publications like Rolling Stone reflected the growing awareness amongst large numbers of people that there was, indeed, a distinct or alternate culture to which we belonged, flourishing in the stagnant midst of mid-Sixties American society. The particular audacity of the people who started such publications was in their belief that there was a readership "out there " that would support a magazine which focused on rock music. That fact was that the music was the primary a daily source of inspiration, instruction, and energy-in the lives of the members of this new culture and was certainly important enough to be written about seriously and with the respect which it never received from the establishment press.

Simultaneously, necessarily, with the rise of rock criticism there arose rock history ; the discovery of the roots of rock music (and the new culture) in "rhythm and blues" which was the product and distillation of Black American life. Since that time there have been any number of books written about individual rock artists or groups; obsessive, loving discographies of blues and R & B artists; rock encyclopedias; sociological analyses of Black culture and of the music it produced, etc. However, it is only in the past year or two that anything has been written about the music business itself and of the people in its thrall. There are now two books available which brilliantly illuminate the heretofore shadowy workings of the soft machine which serves up our daily spiritual bread - Making Tracks: Atlantic Records and the Growth of a Multi-Billion-Dollar Industry and Clive: Inside The Record Business.

A young Briton named Charlie Gillett is responsible for "Making Tracks." The inspiration for his work grew directly out of the anger and curiosity he felt when he first discovered, in 1963, the original versions of the tunes he'd only heard "covered" by white imitators before. "In every case the 'original' sounded much better than the copies I had heard over the radio. I felt outraged and cheated by a system which had kept these hidden from me. The piano introduction to Joe Turner's 'Shake, Rattle, and Roll' was the perfect set-up for Joe's opening, shouted command: 'Get out of that bed, and wash you face and hands.' Get out of bed? Bill Haley had never sung that line."

Rock and roll was brought screaming and kicking into the world via small, independent record companies (the 60-year old giants CBS and RCA simply didn't have the ears). These included Sun, which had Elvis, Jerry Lee Lewis, Carl Perkins, and Johnny Cash; Specialty, which had Little Richard; Chess, which had Chuck Berry and Bo Diddley; Imperial, which had Fats Domino; and Atlantic, which had LaVern Baker, Joe Turner, Ray Charles and the Coasters. Today only Atlantic continues to thrive and under essentially the same management that founded and developed it. Gillett talked to each of the 4 founders - Ahmet Ertegun, the son of Turkey's ambassador to the U.S., who was a philosophy student who'd pruned his credo down thus, "I didn't want to go in the army, and I didn't want to work." He figured making records would satisfy his requirements; Herb Abramson, who left dentistry to concentrate on recording music; and Jerry Wexler, a jazz fanatic who worked writing biographies of contemporary music stars for Billboard, an industry magazine, before filling in, permanently as it turned out, for Herb when he went into the Army in 1953. Ertegun and Wexler run Atlantic to this day.

A most instructive part of this book is its description of the operation of the early "indies." These companies were run, for the most part, by white men who disliked the music, despised the audience, and consequently treated the performers like shit. They rarely survived. The usual procedure in those days was to hold pirate recording sessions, pay musicians below the union rates, and to rarely cough up royalties. (Not that the indies had any monopoly on bad practice. Ahmet Ertegun recalled this moral fable: "I'll never forget, after we'd been going a year or two, a senior staff man came to me from Columbia Records. He said, 'Listen, we've been watching you, and we think you're making some pretty good product. And we'd like to take you over.' I said, 'Really? On what basis?' He said, 'How about if we give you a two percent royalty, out of which you can take care of the artists.' I said, 'Take care of the artists? We're giving them three to five percent.' And he said, 'So it's you that's been spoiling it for everybody.'")

Atlantic Records was different from the start. The men who ran it loved the music, took pains to record it cleanly, stood by and developed their artists and regularly paid royalty checks.

Besides etching in Wexler and Ertegun, Gillett digs up accounts concerning the creation of what most historians agree are the very first rock and roll tunes. If for no other reason this book is invaluable. Jesse Stone, a black musician and songwriter who had done a stint with Duke Ellington's band and had later led his own, was engaged as an arranger for Atlantic by Herb Abramson. He accompanied Herb and Ahmet down South in 1950 on what was to become an annual company search for new artists and new sounds. Ahmet had been especially intrigued for years by the boogie piano of people like Albert Ammons, Meade Lux Lewis, Pete Johnson, and Jimmy Yancey - a style which emphasized a repetitive bass figure in the left hand. As Jesse tells it, "When we got back from that first trip I started writing. I had to learn rock & roll - we didn't call it rock & roll then - and it wasn't something that I could do easily at first. I considered it backward, musically, and I didn't like it, until I started to learn that the rhythm content was the important thing. Then I started to like it, and finally I started writing tunes. And I think I was one of the first people to write in a bass pattern, which was important for dancing - and I had always been a dancer."

Stone wrote and arranged Ruth Brown's "Teardrops From My Eyes" in 1950, the Drifters' "Money Honey" in 1953, and later, Joe Turner's breakthrough hit "Shake, Rattle, and Roll" in 1954, which was immediately covered by and sold 2 million copies for Bill Haley and the Comets. Meanwhile, Ahmet was working with the Clovers and together they came up with "Don't You Know I Love You" in 1951 which included, for the first time and almost by chance, a sax player on what was supposed to be a pure vocal group record.

Gillett goes on to do a great job describing the formation and rise of the Coasters, Ray Charles, the Drifters, and of Jerry Leiber and Mike Stoller, 17-year-old whiz kids when they began writing tunes like "Hound Dog," "Riot in Cell Block #9," "Poison Ivy," "Yakety Yak," and dozens more. He gives us the musical story of Otis Redding, Wilson Pickett, and Aretha Franklin, as Atlantic grew into the Sixties and continues through the beginning of the Seventies with descriptions of the launching of the careers of Cream, and Dr. John, Led Zeppelin, John Prine, and of the successful wooing of the Rolling Stones.

"Making Tracks" is lovingly written and enthusiastic throughout. It is an indispensable look at the development and

"The quest for artistic excellence is, bluntly stated, a search for profit. This is somewhat camouflaged by music's emotional lure, it's compelling excitement, the industry's glamour, and the challenge of 'breaking out' new talent."- Clive Davis

promotion of rock and the music industry. "Clive" is a first-person account of the operation of Columbia Records during Clive Davis' tenure there from 1960 until his scandalous dismissal in 1973. He served as Columbia's chief administrative officer from 1965 on. Before we go any further, it is important to know something about the size and influence of Columbia Records. They control every aspect of the creation, production and distribution of their product. They have writers and studio musicians and engineers on salary. They have their own pubhshing company, recording studios and pressing plants (they also press, for a fee, all the records for Warner Bros., Elektra, A&M, Vanguard and Buddah). They even own their own retail outlets, Discount Records. The word was, a year or so ago, that Columbia Records makes one dollar clear profit per album on the wholesale Ie vel. Clive came to power at a crucial period during the development of the alternative culture and, consequently, of the record industry. What made him unique was that he was among the first record executives to sense this revolutionary change in consciousness and music in 1.967, and to begin to mobilize the huge.staid, and sagging company for whom he worked so that they could begin to capitalize on it. Clive's narrative is personal and apparently forthright - "The quest for artistic excellence is ... bluntly stated, a search for profit. This is somewhat camouflaged by music's emotional lure, its compelling excitement, the industry's glamour, and the challenge of "breaking out" new talent. Yet corporate management can shock happy executives back to reality in a hurry; they want profits, more and more every year." Although this book is fascinating and useful straight through, it really begins for most of us at Chapter 5, with Clive's account of his experiences at the Monterey Pop Festival in 1967. Clive reports that "The Festival exuded love, brotherly love, the idea that love could cure ills and solve problems . . . and I was a believer that week." But it was Janis Joplin who particulary floored Clive and he knew he (Columbia) had to have her at any cost. He did get her after awhile and, later, the Electric Flag, Spirit, Blood, Sweat & Tears, Chicago, Laura Nyro, the Chambers Brothers, Sly & the Family Stone, Santana, Johnny Winter. Edgar Winter, and It's A Beautiful Day. Columbia's profits had soared 600 percent in the four years of Clive's reign but Clive foresaw that it wouldn't be enough to keep them on top. New artists simply weren't generating the sales they once did so Clive decided to embark "on the heaviest talent-raiding campaign ever conducted in the history of the music business." When the dust had settled Columbia had signed Ten Years After, Neil Diamond, Mott TheHoople, Dave Masón, Earth, Wind & Fire, West, Bruce & Laing, Kris Kristofferson, the Isley Bros., Herbie Hancock and Pink Floyd. New artists - or artists yet to break - included Loggins and Messina, the Mahavishnu Orchestra, New Riders of the Purple Sage, Aerosmith, Loudon Wainwright III, Bruce Springsteen and David Bromberg. They acquired the Philadelphia International label and producers Gamble and Huff brought Columbia success with Billy Paul, the O'Jays, MFSB, and Harold Meivin & the Blue Notes - in sum, a staggering roster of talent. Clive details most of the individual negotiations involved and the intercompany squabbles that accompanied them. His book is a rare, relatively revealing look inside the record business. But what is really striking about "Clive" was that this one man made all these decisions himself. Even given what amounts to a genius for sensing what he calis "that indefinable electricity" in artists and for knowing precisely how to market that talent in the most successful way, this man, whose first love was Broadway show music, had the absolute power to decide, effectively, who our culture héroes were to be and what information we were to receive. And remember his major concern, as he saw it, was the Bottom Line, that is, the final profit or loss figure. "It is dangerous to be too progressive or too far ahead of your time," he declared. The so-called Young Turks at Atlantic Records, the just-past-30-year-olds in executive positions there, were feeling creatively stifled and not a little resentful because, until just recently Ahmet and Jerry made all the decisions concerning which artists were signed, how they were produced and promoted. Don't we all continued on page 25 ■nis