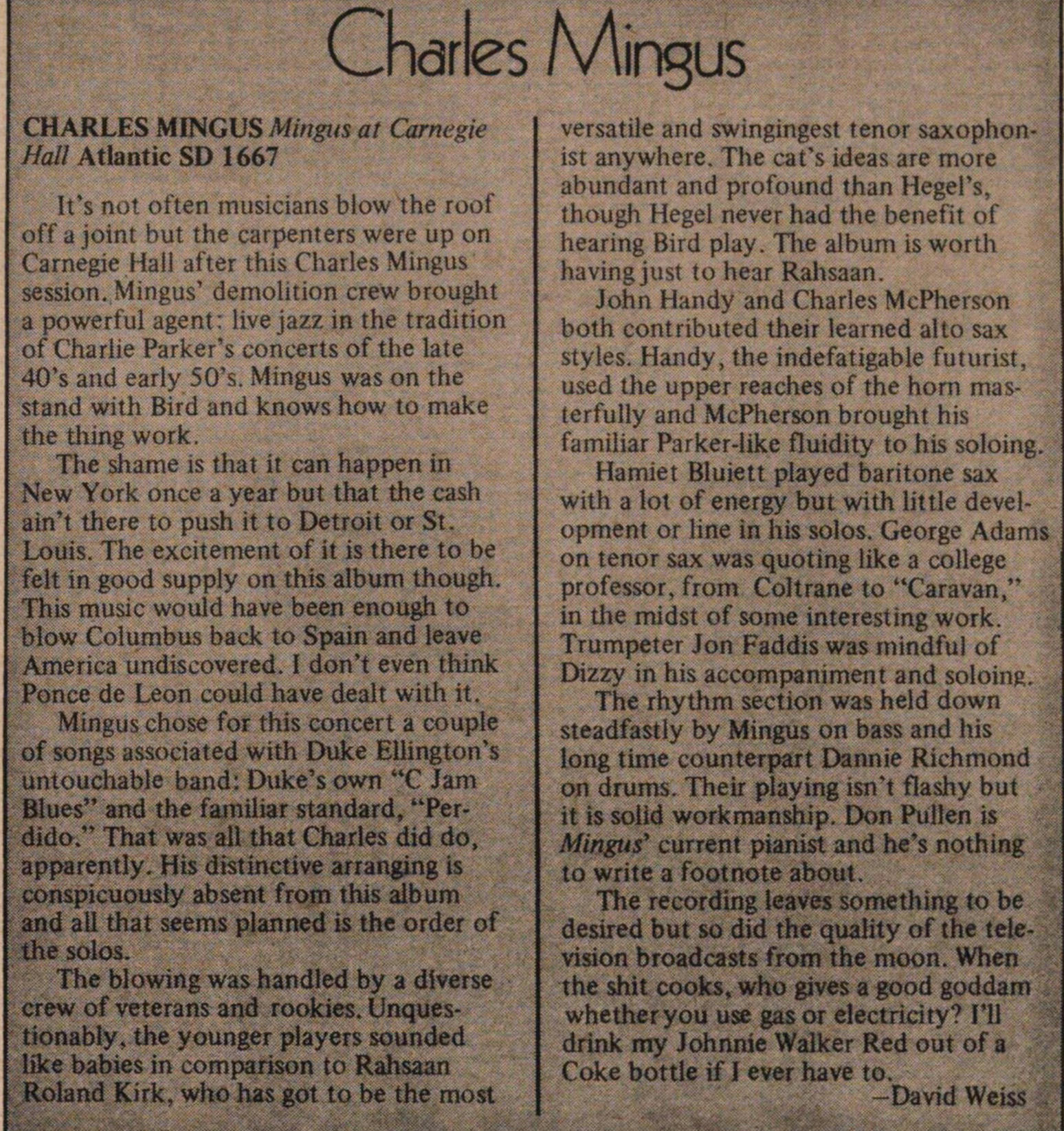 It's not often musicians blow the roof off a joint but the carpenters were up on Carnegie Hall after this Charles Mingus session. Mingus' demolition crew brought a powerful agent: live jazz in the tradition of Charlie Parker's concerts of the late 40's and early 50's. Mingus was on the stand with Bird and knows how to make the thing work.

The shame is that it can happen in New York once a year but that the cash ain't there to push it to Detroit or St. Louis. The excitement of it is there to be felt in good supply on this album though. This music would have been enough to blow Columbus back to Spain and leave America undiscovered. I don't even think Ponce de Leon could have dealt with it.

Mingus chose for this concert a couple of songs associated with Duke Ellington's untouchable band: Duke's own "C Jam Blues" and the familiar standard, "Perdido." That was all that Charles did do, apparently. His distinctive arranging is conspicuously absent from this album and all that seems planned is the order of the solos.

The blowing was handled by a diverse crew of veterans and rookies. Unquestionably, the younger players sounded like babies in comparison to Rahsaan Roland Kirk, who has got to be the most versatile and swingingest tenor saxophonist anywhere. The cat's ideas are more abundant and profound than Hegel's, though Hegel never had the benefit of hearing Bird play. The album is worth having just to hear Rahsaan.

John Handy and Charles McPherson both contributed their learned alto sax styles. Handy, the indefatigable futurist, used the upper reaches of the horn masterfully and McPherson brought his familiar Parker-like fluidity to his soloing.

Hamiet Bluiett played baritone sax with a lot of energy but with little development or line in his solos. George Adams on tenor sax was quoting like a college professor, from Coltrane to "Caravan," in the midst of some interest ing work. Trumpeter Jon Faddis was mindful of Dizzy in his accompaniment and soloing.

The rhythm section was held down steadfastly by Mingus on bass and his long time counterpart Dannie Richmond on drums. Their playing isn't flashy but it is solid workmanship. Don Pullen is Mingus' current pianist and he's nothing to write a footnote about.

The recording leaves something to be desired but so did the quality of the television broadcasts from the moon. When the shit cooks, who gives a good goddam whether you use gas or electricity? I'll drink my Johnnie Walker Red out of a Coke bottle if I ever have to.