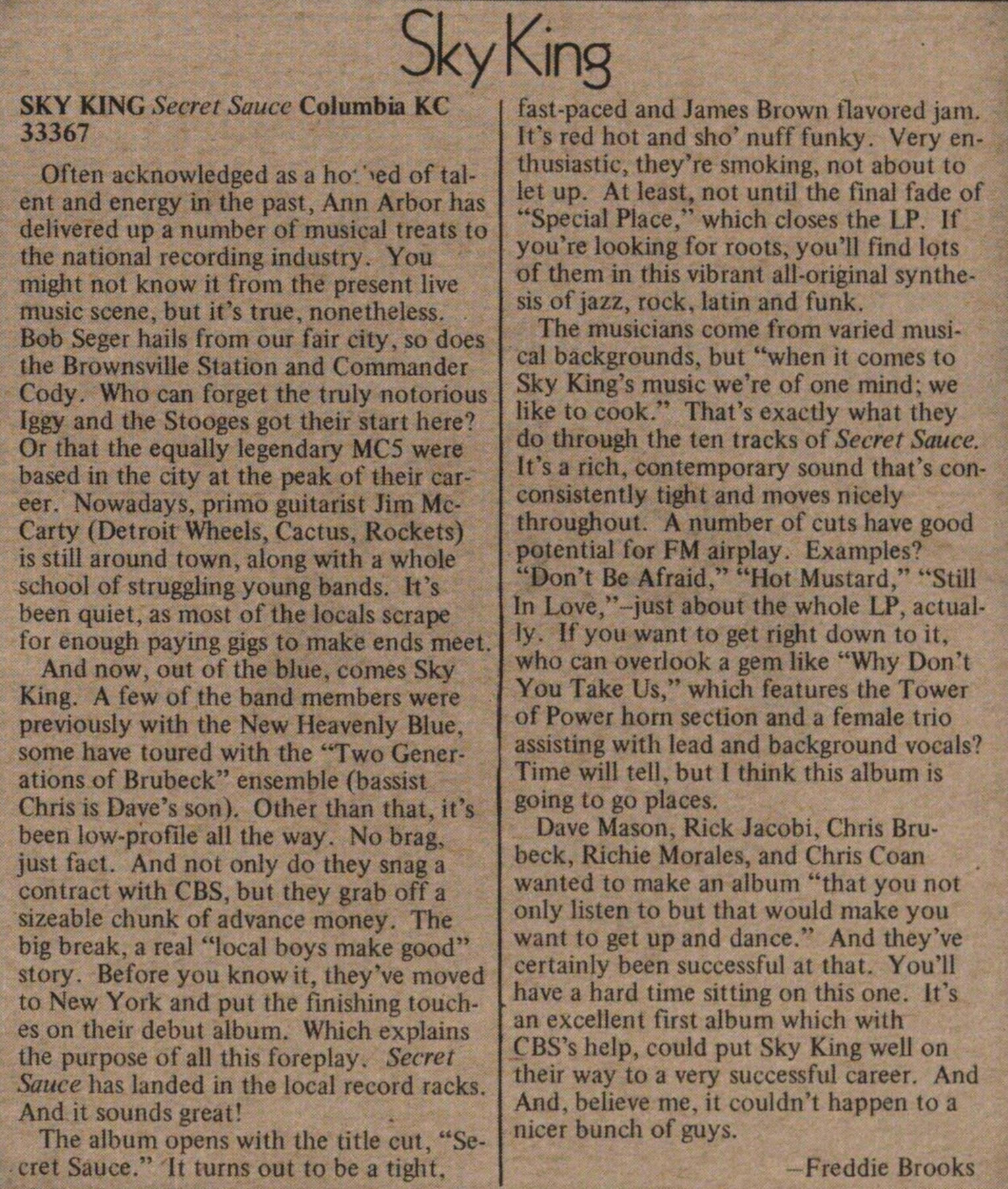 Often acknowledged as a hotbed of talent and energy in the past, Ann Arbor has delivered up a number of musical treats to the national recording industry. You might not know it from the present live music scene, but it's true, nonetheless. Bob Seger hails from our fair city, so does the Brownsville Station and Commander Cody. Who can forget the truly notorious Iggy and the Stooges got their start here? Or that the equally legendary MC5 were based in the city at the peak of their career. Nowadays, primo guitarist Jim McCarty (Detroit Wheels, Cactus, Rockets) is still around town, along with a whole school of struggling young bands, It's been quiet, as most of the locals scrape for enough paying gigs to make ends meet.

And now, out of the blue, comes Sky King. A few of the band members were previously with the New Heavenly Blue, some have toured with the "Two Generations of Brubeck" ensemble (bassist Chris is Dave's son). Other than that, it's been low-profile all the way. No brag, just fact. And not only do they snag a contract with CBS, but they grab off a sizeable chunk of advance money. The big break, a real "local boys make good" story. Before you know it, they've moved to New York and put the finishing touches on their debut album. Which explains the purpose of all this foreplay. Secret Sauce has landed in the local record racks. And it sounds great!

The album opens with the title cut, "Secret Sauce." It turns out to be a tight, fast-paced and James Brown flavored jam. It's red hot and sho' nuff funky. Very enthusiastic, they're smoking, not about to let up. At least, not until the final fade of "Special Place," which doses the LP. If you're looking for roots, you'll find lots of them in this vibrant all-original synthesis of jazz, rock, latin and funk.

The musicians come from varied musical backgrounds, but "when it comes to Sky King's music we're of one mind; we like to cook." That's exactly what they do through the ten tracks of Secret Sauce. It's a rich, contemporary sound that's con-consistently tight and moves nicely throughout. A number of cuts have good potential for FM airplay. Examples? "Don't Be Afraid," "Hot Mustard," "Still In Love,"-just about the whole LP, actually. If you want to get right down to it, who can overlook a gem like "Why Don't You Take Us," which features the Tower of Power horn section and a female trio assisting with lead and background vocals? Time will tell, but I think this album is going to go places.

Dave Mason, Rick Jacobi, Chris Brubeck, Richie Morales, and Chris Coan wanted to make an album "that you not only listen to but that would make you want to get up and dance." And they've certainly been successful at that. You'll have a hard time sitting on this one. It's an excellent first album which with CBS's help, could put Sky King well on their way to a very successful career. And And, believe me, it couldn't happen to a nicer bunch of guys.