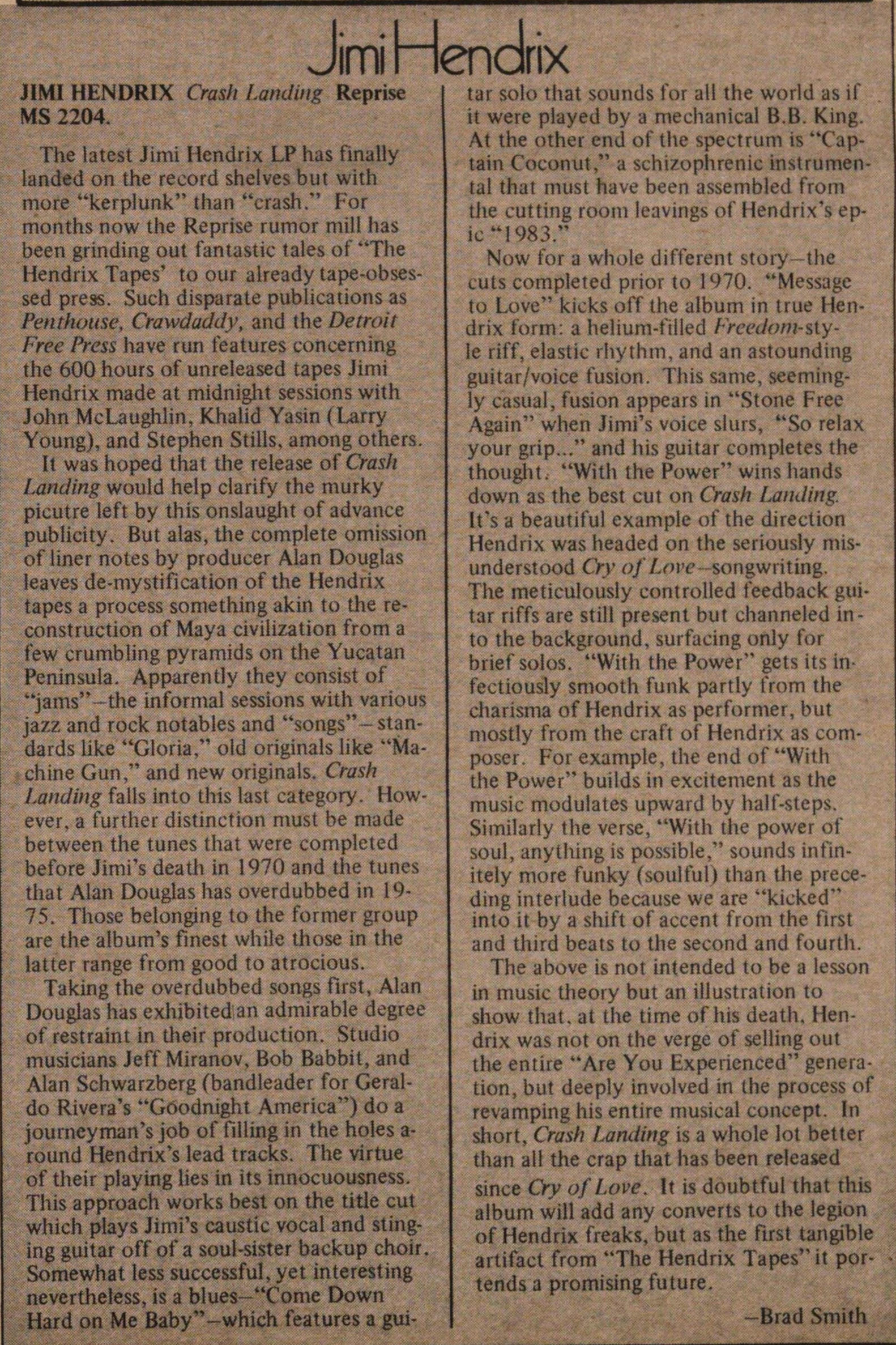 The latest Jimi Hendrix LP has finally landed on the record shelves but with more "kerplunk" than "crash." For months now the Reprise rumor mill has been grinding out fantastic tales of "The Hendrix Tapes' to our already tape-obsessed press. Such disparate publications as Penthouse, Crawdaddy, and the Detroit Free Press have run features concerning the 600 hours of unreleased tapes Jimi Hendrix made at midnight sessions with John McLaughlin, Khalid Yasin (Larry Young), and Stephen Stills, among others.

It was hoped that the release of Crash Landing would help clarify the murky picture left by this onslaught of advance publicity. But alas, the complete omission of liner notes by producer Alan Douglas leaves de-mystification of the Hendrix tapes a process something akin to the reconstruction of Maya civilization from a few crumbling pyramids on the Yucatán Península. Apparently, they consist of "jams" the informal sessions with various jazz and rock notables and standards like "Gloria," old originals like "Machine Gun," and new originals. Crash Landing falls into this last category. However. a further distinction must be made between the tunes that were completed before Jimi's death in 1970 and the tunes that Alan Douglas has overdubbed in 1975. Those belonging to the former group are the album's finest white those in the latter range from good to atrocious.

Taking the overdubbed songs first, Alan Douglas has exhibited admirable degree of restraint in their production. Studio musicians Jeff Miranov, Bob Babbit, and Alan Schwarzberg (bandleader for Geraldo Rivera's "Goodnight America") do a journeyman's job of filling in the holes around Hendrix's lead tracks. The virtue of their playing lies in its innocuousness. This approach works best on the title cut which plays Jimi's caustíc vocal and stinging guitar off of a soul-sister backup choir. Somewhat less successful, yet interesting nevertheless, is a blues-"Come Down Hard on Me Baby"-which features a guitar solo that sounds for all the world as if it were played by a mechanical B.B. King. At the other end of the spectrum is "Captain Coconut," a schizophrenic instrumental that must have been assembled from the rotting room leavings of Hendrix's epic "1983."

Now for a whole different story- the cuts completed prior to 1970. "Message to Love" kicks off the album in true Hendrix form: a helium-filled Freedom-style riff, elastic rhythm, and an astounding guitar/voice fusion. This same, seemingly casual, fusion appears in "Stone Free Again" when Jimi's voice slurs, "So relax your grip..." and his guitar completes the thought. "With the Power" wins hands down as the best cut on Crash Landing. It's a beautiful example of the direction Hendrix was headed on the seriously misunderstood Cry of Love songwiïting. The meticulously controlled feedback guitar riffs are still present but channeled into the background, surfacing only for brief solos. "With the Power" gets its infectiously smooth funk partly from the charisma of Hendrix as performer, but mostly from the craft of Hendrix as composer. For example, the end of "With the Power" builds in excitement as the music modulates upward by half-steps. Similarly the verse, "With the power of soul, anything is possible," sounds infinitely more funky (soulful) than the preceding interlude because we are "kicked" into it by a shift of accent from the first and third beats to the second and fourth.

The above is not intended to be a lesson in music theory but an illustration to show that at the time of his death, Hendrix was not on the verge of selling out the entire "Are You Experienced" generation, but deeply involved in the process of revamping his entire musical concept. In short. Crash Landing is a whole lot better than all the crap that has been released since Cry of Love. It is doubtful that this album will add any converts to the legion of Hendrix freaks, but as the first tangible artifact from "The Hendrix Tapes," it portends a promising future.