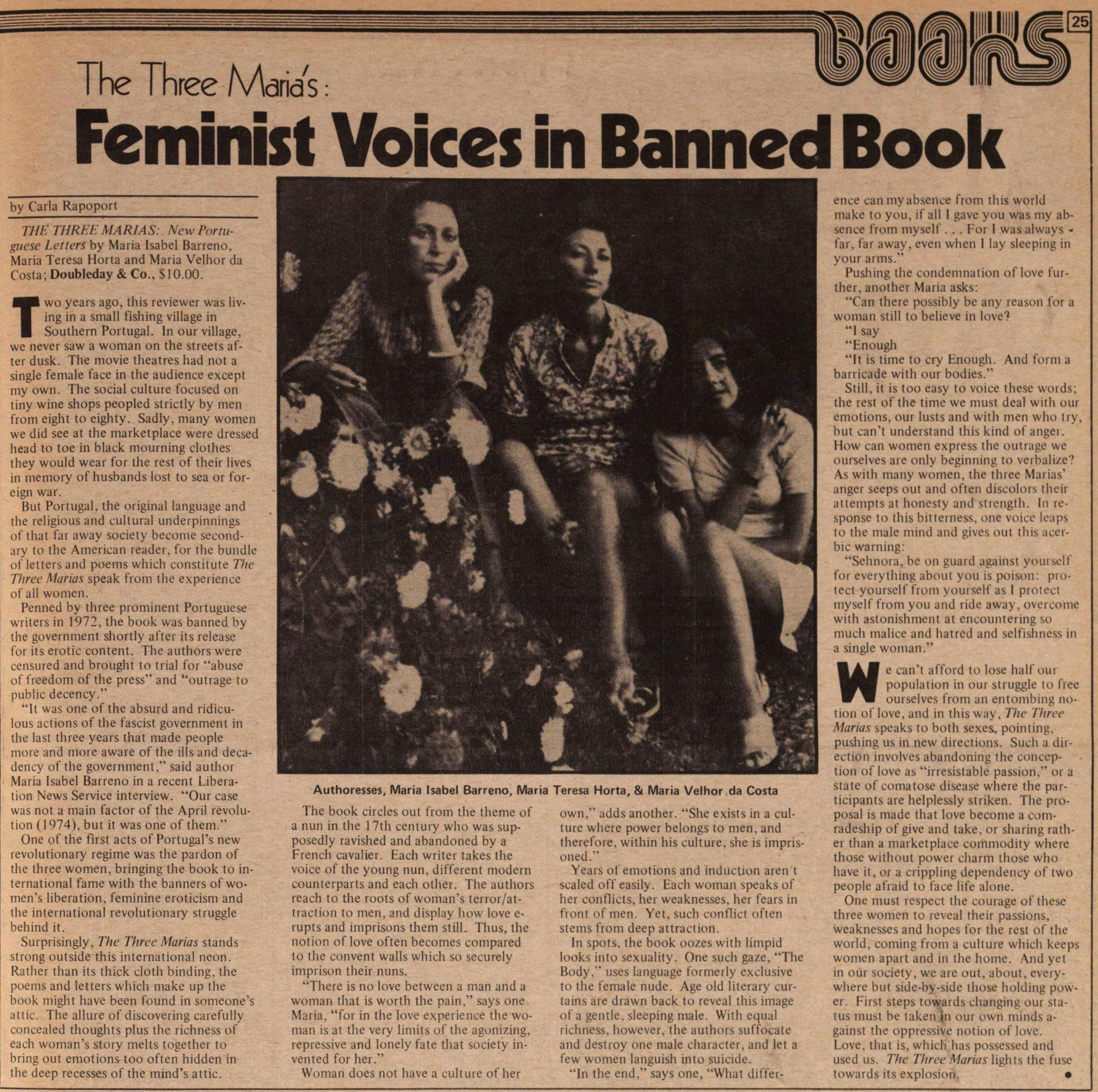 Two years ago, this reviewer was living in a small fishing village in Southern Portugal. In our village, we never saw a woman on the streets after dusk. The movie theatres had not a single female face in the audience except my own. The social culture focused on tiny wine shops peopled strictly by men from eight to eighty. Sadly. many women we did see at the marketplace were dressed head to toe in black mourning clothes they would wear for the rest of their lives in memory of husbands lost to sea or foreign war.

But Portugal, the original language and the religious and cultural underpinnings of that far away society become secondary to the American reader, for the bundle of letters and poems which constitute The Three Marias speak from the experience of all women.

"It was one of the absurd and ridiculous actions of the fascist government in the last three years that made people more and more aware of the ills and decadency of the government," said author Maria Isabel Barreno in a recent Liberation News Service interview. "Our case was not a main factor of the April revolution (1974), but it was one of them."

One of the first acts of Portugal's new revolutionary regime was the pardon of the three women, bringing the book to international fame with the banners of women's liberation, feminine eroticism and the international revolutionary struggle behind it. Surprisingly, The Three Marias stands strong outside this international neon. Rather than its thick cloth binding, the poems and letters which make up the book might have been found in someone's attic. The allure of discovering carefully concealed thoughts plus the richness of each woman's story melts together to bring out emotions too often hidden in the deep recesses of the mind's attic.

The book circles out from the theme of a nun in the 17th century who was supposedly ravished and abandoned by a French cavalier. Each writer takes the voice of the young nun, different modern counterparts and each other. The authors reach to the roots of woman 's terror/attraction to men, and display how love erupts and imprisons them still. Thus, the notion of love often becomes compared to the convent walls which so securely imprison their nuns.

"There is no love between a man and a woman that is worth the pain," says one Maria, "for in the love experience the woman is at the very limits of the agonizing, repressive and lonely fate that society invented for her."

Woman does not have a culture of her own," adds another. "She exists in a culture where power belongs to men, and therefore. within his culture, she is imprisoned."

Years of emotions and induction aren’t scaled off easily. Each woman speaks of her conflicts, her weaknesses, her fears in front of men. Yet, such conflict often sterns from deep attraction.

In spots, the book oozes with limpid looks into sexuality. One such gaze, "The Body," uses language formerly exclusive to the female nude. Age old literary curtains are drawn back to reveal this image of a gentle, sleeping male. With equal richness, however, the authors suffocate and destroy one male character, and let a few women languish into suicide.

"In the end." says one, "What difference can my absence from this world make to you, if all I gave you was my absence from myself . . . For I was always - far, far away, even when I lay sleeping in your arms."

Pushing the condemnation of love further, another Maria asks: "Can there possibly be any reason for a woman still to believe in love?

"It is time to cry Enough. And form a barricade with our bodies."

Still, it is too easy to voice these words; the rest of the time we must deal with our emotions, our lusts and with men who try, but can't understand this kind of anger. How can women express the out rage we ourselves are only beginning to verbalize? As with many women, the three Marias' anger seeps out and often discolors their attempts at honesty and strength. In response to this bitterness, one voice leaps to the male mind and gives out this acerbic warning:

"Sehnora, be on guard against yourself for everything about you is poison: protect yourself from yourself as I protect myself from you and ride away, overcome with astonishment at encountering so much malice and hatred and selfishness in a single woman."

We can't afford to lose half om population in our struggle to free ourselves from an entombing notion of love, and in this way, The Three Marias speaks to both sexes, pointing, pushing us in new directions. Such a direction involves abandoning the conception of love as "irresistable passion," or a state of comatose disease where the participants are helplessly striken. The proposal is made that love be a comradeship of give and take, or sharing rather than a marketplace commodity where those without power charm those who have it, or a crippling dependency of two people afraid to face life alone.

One must respect the courage of these three women to reveal their passions, weaknesses and hopes for the rest of the world, coming from a culture which keeps women apart and in the home. And yet in our society, we are out, about, everywhere but side-by-side those holding power. First steps towards changing our status must be taken in our own minds against the oppressive notion of love. Love, that is. which has possessed and used us. The Three Marias lights the fuse towards its explosion.