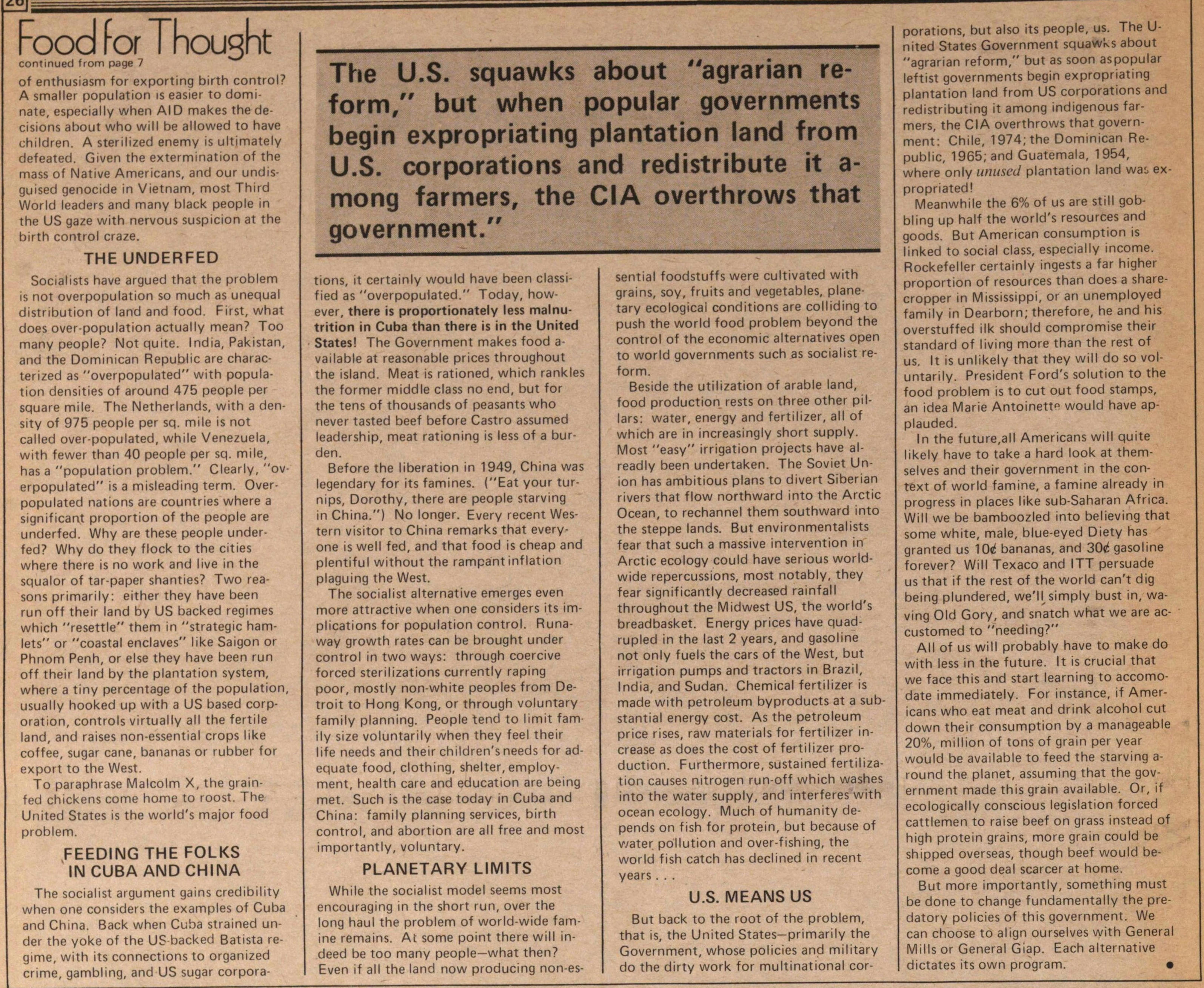 of enthusiasm for exporting birth control? A smaller population is easier to dominate, especially when AlD makes the decisions about who will be allowed to have children. A sterilized enemy is ultimately defeated. Given the exterminaron of the mass of Native Americans, and our undisguised genocide in Vietnam, most Third World leaders and many black people in the US gaze with nervous suspicion at the birth control craze.

Socialists have argued that the problem is not overpopulation so much as unequal distribution of land and food. First, what does overpopulation actually mean? Too many people? Not quite. India, Pakistan, and the Dominican Republic are characterized as "overpopulated" with population densities of around 475 people per square mile. The Netherlands, with a density of 975 people per sq. mile is not called overpopulated, while Venezuela, with fewer than 40 people per sq. mile, has a "population problem." Clearly, "overpopulated" is a misleading term. Overpopulated nations are countries where a significant proportion of the people are underfed. Why are these people underfed? Why do they flock to the cities where there is no work and live in the squalor of tar-paper shanties? Two reasons primarily: either they have been run off their land by US backed regimes which "resettle" them in "strategic hamlets" or "coastal enclaves" like Saigon or Phnom Penh, or else they have been run off their land by the plantation system, where a tiny percentage of the population, usually hooked up with a US based corporation, controls virtually all the fertile land, and raises non-essential crops like coffee, sugar cane, bananas or rubber for export to the West.

To paraphrase Malcolm X, the grainfed chickens come home to roost. The United States is the world's major food problem.

Feeding The Folks In Cuba And China

The socialist argument gains credibility when one considers the examples of Cuba and China. Back when Cuba strained under the yoke of the US-backed Batista regime, with its connections to organized crime, gambling, and US sugar corporations, it certainly would have been classified as "overpoputated." Today, however, there is proportionately less malnutrition in Cuba than there is in the United States! The Government makes food available at reasonable prices throughout the island. Meat is rationed, which rankles the former middle class no end, but for the tens of thousands of peasants who never tasted beef before Castro assumed leadership, meat rationing is less of a burden.

Before the liberation in 1949, China was legendary for its famines. ("Eat your turnips, Dorothy, there are people starving in China.") No longer. Every recent Western visitor to China remarks that everyone is well fed, and that food is cheap and plentiful without the rampant inflation plaguing the West.

The socialist alternative emerges even more attractive when one considers its implications for population control. Runaway growth rates can be brought under control in two ways: through coercive forced sterilizations currently raping poor, mostly non-white peoples from Detroit to Hong Kong, or through voluntary family planning. People tend to limit family size voluntarily when they feel their life needs and their children's needs for adequate food, clothing, shelter, employment, health care and education are being met. Such is the case today in Cuba and China: family planning services, birth control, and abortion are all free and most importantly, voluntary.

While the socialist model seems most encouraging in the short run, over the long haul the problem of world-wide famine remains. At some point there will indeed be too many people-what then? Even if all the land now producing non-essential foodstuffs were cultivated with grains, soy, fruits and vegetables, planetary ecological conditions are colliding to push the world food problem beyond the control of the economic alternatives open to world governments such as socialist reform.

Beside the utilization of arable land, food production rests on three other pillars: water, energy and fertilizer, all of which are in increasingly short supply. Most "easy" irrigation projects have alreadly been undertaken. The Soviet Union has ambitious plans to divert Siberian rivers that flow northward into the Arctic Ocean, to rechannel them southward into the steppe lands. But environmentalists fear that such a massive intervention in Arctic ecology could have serious worldwide repercussions, most notably, they fear significantly decreased rainfall throughout the Midwest US, the world's breadbasket. Energy prices have quadrupled in the last 2 years, and gasoline not only fuels the cars of the West, but irrigation pumps and tractors in Brazil, India, and Sudan. Chemical fertilizer is made with petroleum byproducts at a substantial energy cost. As the petroleum price rises, raw materials for fertilizer increase as does the cost of fertilizer production. Furthermore, sustained fertilization causes nitrogen  run-off which washes into the water supply, and interferes with ocean ecology. Much of humanity depends on fish for protein, but because of water pollution and over-fishing, the world fish catch has declined in recent years...

But back to the root of the problem, that is, the United States-primarily the Government, whose policies and military do the dirty work for multinational corporations, but also its people, us. The United States Government squawks about "agrarian reform," but as soon as popular leftist governments begin expropriating plantation land from US corporations and redistributing it among indigenous farmers, the CIA overthrows that government: Chile, 1974; the Dominican Republic, 1965; and Guatemala, 1954, where only unused plantation land was expropriated!

Meanwhile the 6% of us are still gobbling up half the world's resources and goods. But American consumption is linked to social class, especially income. Rockefeller certainly ingests a far higher proportion of resources than does a sharecropper in Mississippi, or an unemployed family in Dearborn; therefore, he and his overstuffed iIk should compromise their standard of living more than the rest of us. It is unlikely that they will do so voluntarily. President Ford's solution to the food problem is to cut out food stamps, an idea Marie Antoinette would have applauded.

In the future, all Americans will quite likely have to take a hard look at themselves and their government in the context of world famine, a famine already in progress in places like sub-Saharan Africa. Will we be bamboozled into believing that some white, male, blue-eyed Diety has granted us 10 bananas, and 30 gasoline forever? Will Texaco and ITT persuade us that if the rest of the world can't dig being plundered, we'll simply bust in, waving Old Gory, and snatch what we are accustomed to "needing?"

All of us will probably have to make do with less in the future. It is crucial that we face this and start learning to accomodate immediately. For instance, if Americans who eat meat and drink alcohol cut down their consumption by a manageable 20%, million of tons of grain per year would be available to feed the starving around the planet, assuming that the government made this grain available. Or, if ecologically conscious legislation forced cattlemen to raise beef on grass instead of high protein grains, more grain could be shipped overseas, though beef would become a good deal scarcer at home.

But more importantly, something must be done to change fundamentally the predatory policies of this government. We can choose to align ourselves with General Mills or General Giap. Each alternative dictates its own program.