How The Law Will Work 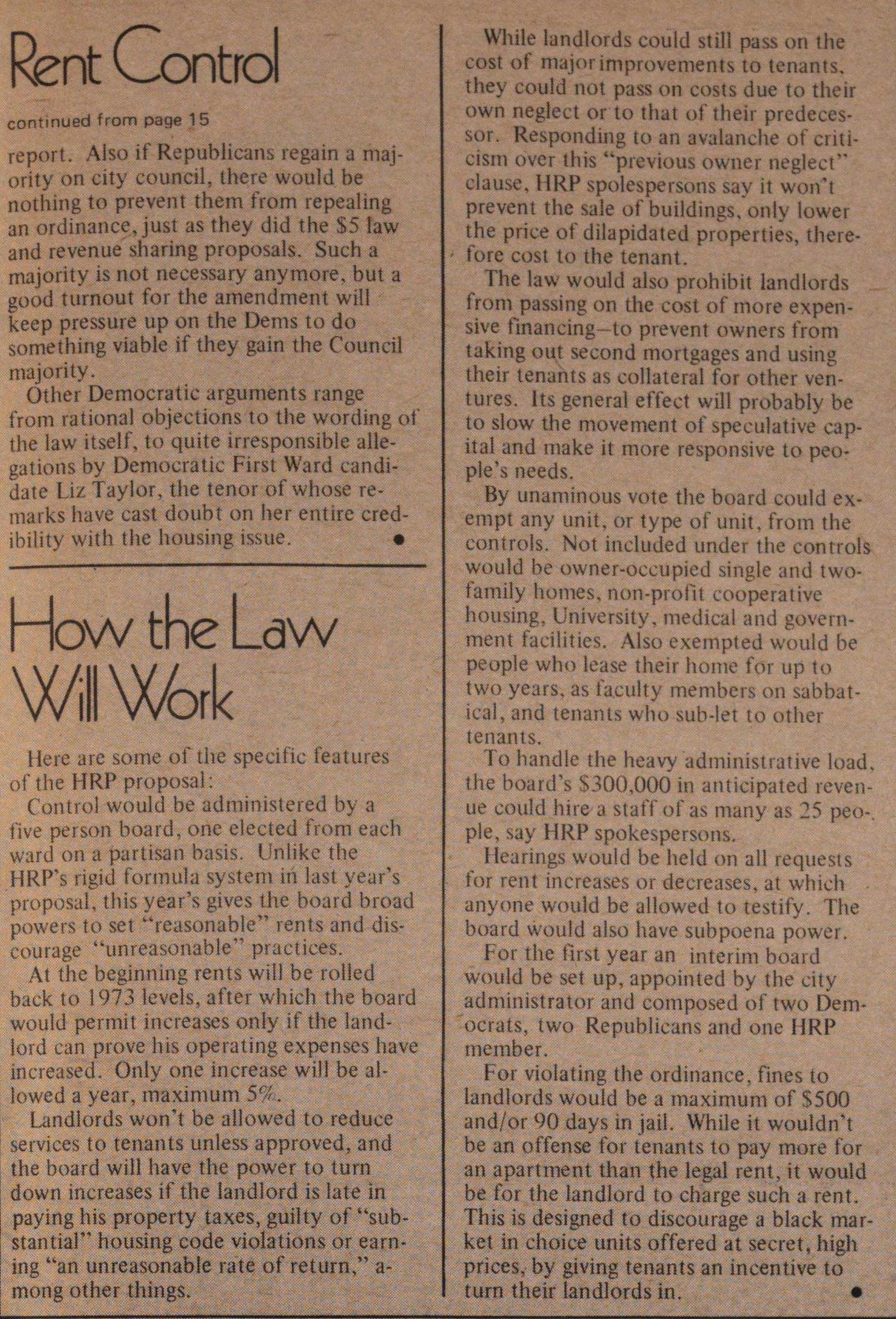 How the Law Will Work

Here are some of the specific features of the HRP proposal:

Control would be administered by a five person board, one elected from each ward on a partisan basis. Unlike the HRP's rigid formula system in last year's proposal, this year's gives the board broad powers to set "reasonable" rents and discourage "unreasonable" practices.

At the beginning rents will be rolled back to 1973 levels, after which the board would permit increases only if the landlord can prove his operating expenses have increased. Only one increase will be allowed a year, maximum 5%.

Landlords won't be allowed to reduce services to tenants unless approved, and the board will have the power to turn down increases if the landlord is late in paying his property taxes, guilty of "substantial" housing code violations or earning "an unreasonable rate of return," among other things.

While landlords could still pass on the  improvements to tenants, they could not pass on costs due to their own neglect or to that of their predecessor. Responding to an avalanche of criticism over this "previous owner neglect" clause, HRP spokespersons say it won't prevent the sale of buildings, only lower the price of dilapidated properties, therefore cost to the tenant.

The law would also prohibit landlords from passing on the cost of more expensive financing-to prevent owners from taking out second mortgages and using their tenants as collateral for other ventures. lt's general effect will probably be to slow the movement of speculative capital and make it more responsive to people's needs.

By unaminous vote the board could exempt any unit, or type of unit. from the controls. Not included under the controls would be owner-occupied single and two family homes, non-profit cooperative housing, University medical and government facilities. Also exempted would be people who lease their home for up to two years, as faculty members on sabbatical, and tenants who sub-let to other tenants.

To handle the heavy administrative load, the board's $300,000 in anticipated revenue could hire a staff many as 25 people, say HRP spokespersons. Hearings would be held on all requests for rent increases or decreases. at which anyone would be allowed to testify. The board would also have subpoena power.

For the first year an interim board would be set up, appointed by the city administrator and composed of two Democrats, two Republicans and one HRP member.

For violating the ordinance fines to landlords would be a maximum of $500 and/or 90 days in jail. While it wouldn't be an offense for tenants to pay more for an apartment than the legal rent, it would be for the landlord to charge such a rent. This is designed to discourage a black market in choice units offered at secret, high prices, by giving tenants an incentive to turn their landlords in.