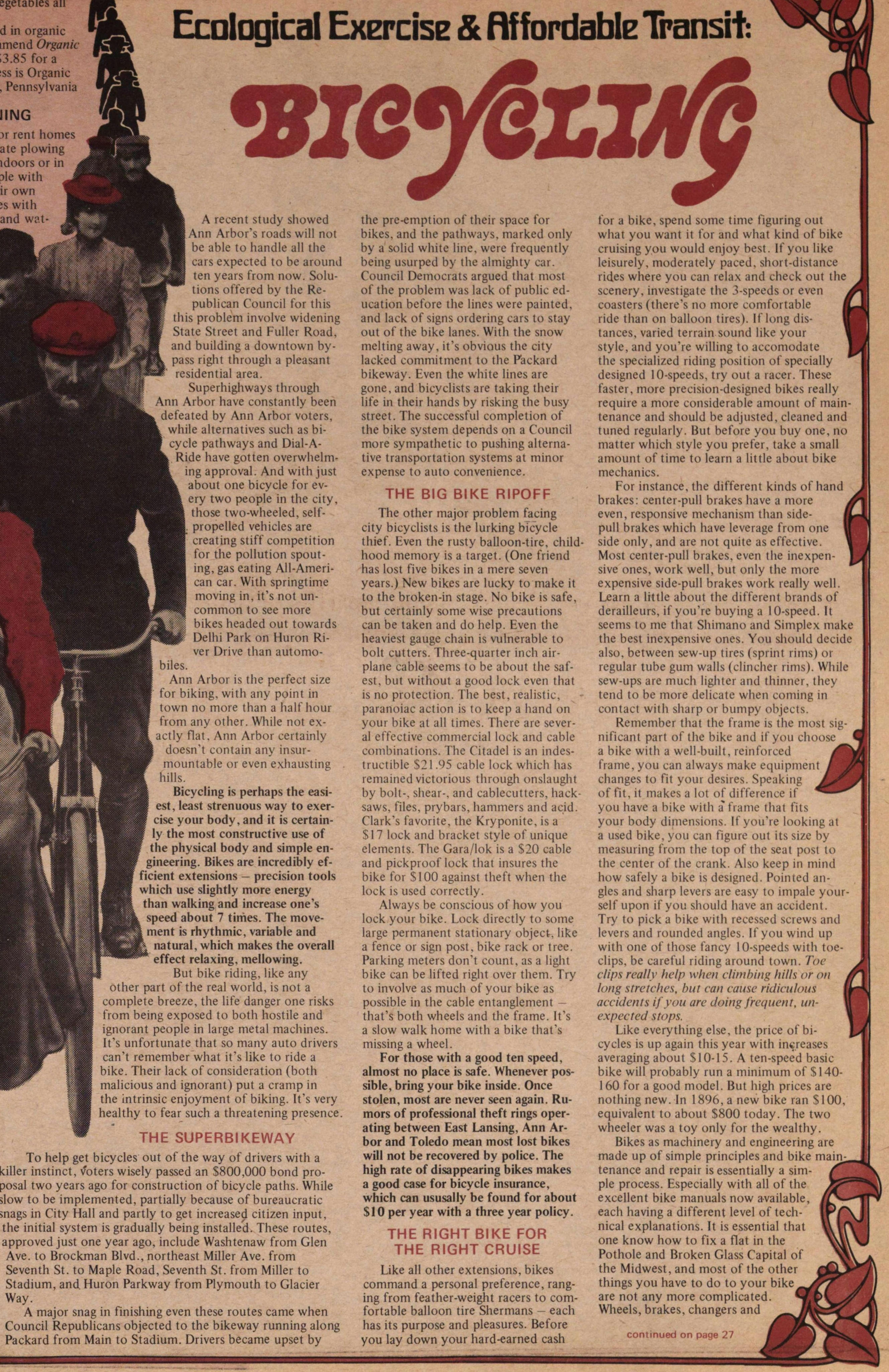 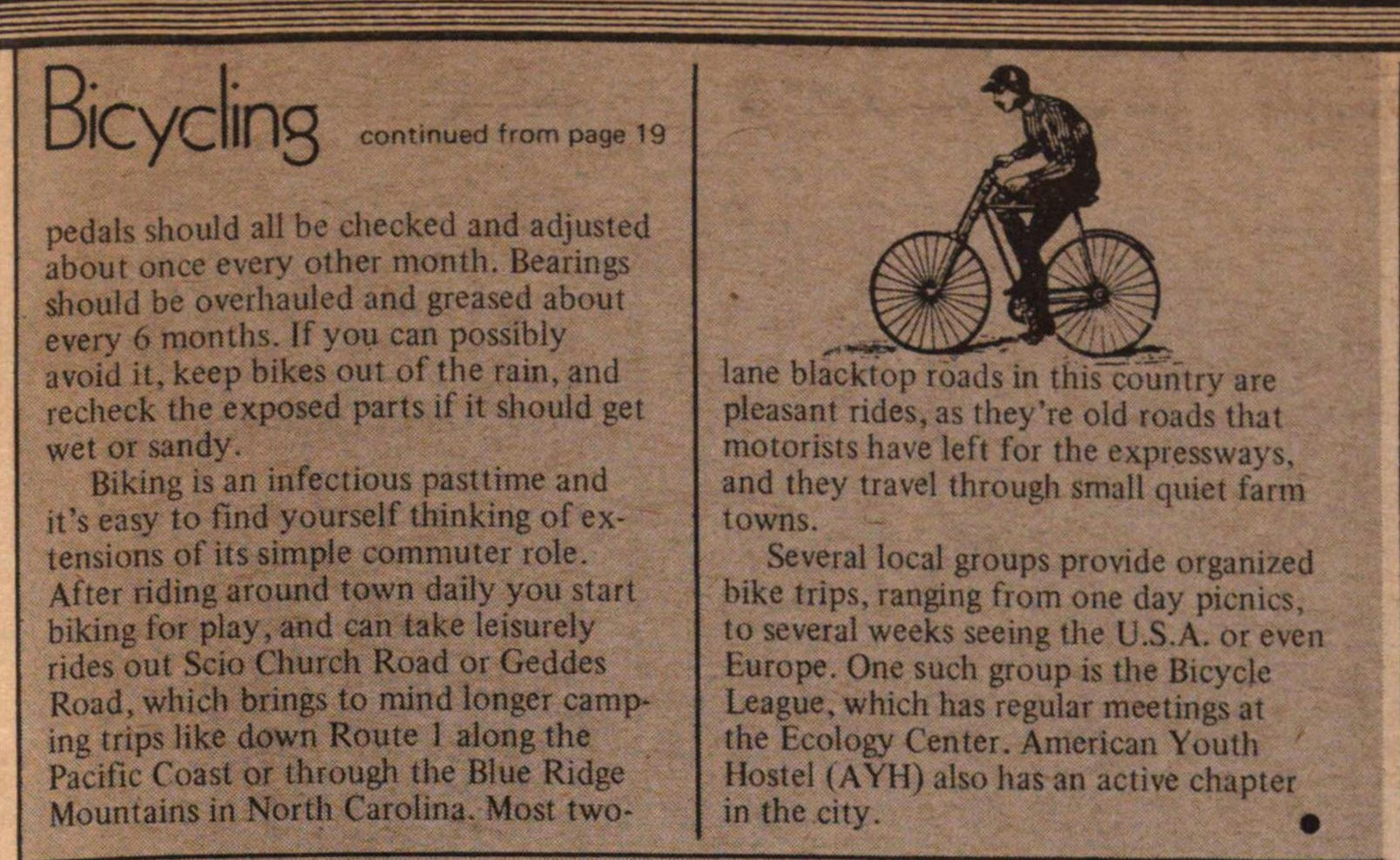 A recent study showed Ann Arbor's roads will not be able to handle all the cars expected to be around ten years from now. Solutions offered by the Republican Council for this this problem involve widening State Street and Fuller Road, and building a downtown bypass right through a pleasant residential area.

Superhighways through Ann Arbor have constantly been defeated by Ann Arbor voters, while alternatives such as bicycle pathways and Dial-A-Ride have gotten overwhelming approval. And with just about one bicycle for every two people in the city, those two-wheeled, self- propelled vehicles are creating stiff competition for the pollution spouting, gas eating All-American car. With springtime moving in, it's not uncommon to see more bikes headed out towards Delhi Park on Huron River Drive than automobiles.

Ann Arbor is the perfect size for biking, with any point in town no more than a half hour from any other. While not exactly flat, Ann Arbor certainly doesn't contain any insurmountable or even exhausting hills.

Bicycling is perhaps the easiest, least strenuous way to use your body, and it is certainly the most constructive use of the physical body and simple engineering. Bikes are incredibly efficient extensions - precision tools which use slightly more energy than walking and increase one's speed about 7 times. The movement is rhythmic, variable and natural, which makes the overall effect relaxing, mellowing.

But bike riding, like any other part of the real world, is not a complete breeze, the life danger one risks from being exposed to both hostile and ignorant people in large metal machines. It's unfortunate that so many auto drivers can't remember what it's like to ride a bike. Their lack of consideration (both malicious and ignorant) put a cramp in the intrinsic enjoyment of biking. It's very healthy to fear such a threatening presence.

THE SUPERBIKEWAY   To help get bicycles out of the way of drivers with a killer instinct, voters wisely passed an $800,000 bond proposal two years ago for construction of bicycle paths. While slow to be implemented, partially because of bureaucratic snags in City Hall and partly to get increased citizen input, the initial system is gradually being installed. These routes, approved just one year ago, include Washtenaw from Glen Ave. to Brockman Blvd., northeast Miller Ave. from Seventh St. to Maple Road, Seventh St. from Miller to Stadium, and Huron Parkway from Plymouth to Glacier Way.

A major snag in finishing even these routes came when Council Republicans objected to the bikeway running along Packard from Main to Stadium. Drivers became upset by the pre-emption of their space for bikes, and the pathways, marked only by a solid white line, were frequently being usurped by the almighty car. Council Democrats argued that most of the problem was lack of public education before the lines were painted, and lack of signs ordering cars to stay out of the bike lanes. With the snow melting away, it's obvious the city lacked commitment to the Packard bikeway. Even the white lines are gone, and bicyclists are taking their life in their hands by risking the busy street. The successful completion of the bike system depends on a Council more sympathetic to pushing alternative transportation systems at minor expense to auto convenience.

THE BIG BIKE RIPOFF The other major problem facing city bicyclists is the lurking bicycle thief. Even the rusty balloon tire, childhood memory is a target. (One friend has lost five bikes in a mere seven years.) New bikes are lucky to make it to the broken-in stage. No bike is safe, but certainly some wise precautions can be taken and do help. Even the heaviest gauge chain is vulnerable to bolt cutters. Three-quarter inch airplane cable seems to be about the safest, but without a good lock even that is no protection. The best, realistic, paranoiac action is to keep a hand on your bike at all times. There are several effective commercial lock and cable combinations. The Citadel is an indestructible $21.95 cable lock which has remained victorious through onslaught by bolt-, shear-, and cable-cutters, hacksaws, files, prybars, hammers and acid. Clark's favorite, the Kryptonite, is a $I7 lock and bracket style of unique elements. The Gara/lok is a $20 cable and pick-proof lock that insures the bike for $I00 against theft when the lock is used correctly.

Always be conscious of how you lock your bike. Lock directly to some large permanent stationary object, like a fence or sign post, bike rack or tree. Parking meters don't count, as a light bike can be lifted right over them. Try to involve as much of your bike as possible in the cable entanglement - that's both wheels and the frame. It's a slow walk home with a bike that's missing a wheel.

For those with a good ten speed, almost no place is safe. Whenever possible, bring your bike inside. Once stolen, most are never seen again. Rumors of professional theft rings operating between East Lansing, Ann Arbor and Toledo mean most lost bikes will not be recovered by police. The high rate of disappearing bikes makes a good case for bicycle insurance, which can usually be found for about $10 per year with a three year policy.

THE RIGHT BIKE FOR THE RIGHT CRUISE   Like all other extensions, bikes command a personal preference, ranging from feather-weight racers to comfortable balloon tire Shermans - each has its purpose and pleasures. Before you lay down your hard-earned cash for a bike, spend some time figuring out what you want it for and what kind of bike cruising you would enjoy best. If you like leisurely, moderately paced, short-distance rides where you can relax and check out the scenery, investigate the 3-speeds or even coasters ( there's no more comfortable ride than on balloon tires). If long distances, varied terrain sound like your style, and you're willing to accommodate the specialized riding position of specially designed 10-speeds, try out a racer. These faster, more precision-designed bikes really require a more considerable amount of maintenance and should be adjusted, cleaned and tuned regularly. But before you buy one, no matter which style you prefer, take a small amount of time to learn a little about bike mechanics.

For instance, the different kinds of hand brakes: center-pull brakes have a more even, responsive mechanism than pull brakes which have leverage from one side only, and are not quite as effective. Most center-pull brakes, even the inexpensive ones, work well, but only the more expensive side-pull brakes work really well. Learn a little about the different brands of derailleurs, if you're buying a 10-speed. It seems to me that Shimano and Simplex make the best inexpensive ones. You should decide also between sew-up tires (sprint rims) or regular tube gum walls (clincher rims). While sew-ups are much lighter and thinner, they tend to be more delicate when coming in contact with sharp or bumpy objects.

Remember that the frame is the most significant part of the bike and if you choose a bike with a well-built, reinforced frame, you can always make equipment changes to fit your desires. Speaking of fit, it makes a lot of difference if you have a bike with a frame that fits your body dimensions. If you're looking at a used bike, you can figure out its size by measuring from the top of the scat post to the center of the crank. Also keep in mind how safely a bike is designed. Pointed angles and sharp levers are easy to impale yourself upon if you should have an accident. Try to pick a bike with recessed screws and levers and rounded angles. If you wind up with one of those fancy 10-speeds with toe clips, be careful riding around town. Toe clips really help when climbing hills or on long stretches, but can cause ridiculous accidents if you are doing frequent, unexpected stops.

Like everything else. the price of bicycles is up again this year with increases averaging about $I0-15. A ten-speed basic bike will probably run a minimum of $140-160 for a good model. But high prices are nothing new. In 1896, a new bike ran $I00, equivalent to about $800 today. The two wheeler was a toy only for the wealthy.

Bikes as machinery and engineering are made up of simple principles and bike maintenance and repair is essentially a simple process. Especially with all of the excellent bike manuals now available, each having a different level of technical explanations. It is essential that one know how to fix a flat in the Pothole and Broken Glass Capital of the Midwest, and most of the other things you have to do to your bike are not any more complicated.  Wheels, brakes, changers and pedals should all be checked and adjusted about once every other month. Bearings should be overhauled and greased about every 6 months. If you can possibly avoid it, keep bikes out of the rain, and recheck the exposed parts if it should get wet or sandy.

Biking is an infectious pastime and it's easy to find yourself thinking of extensions of its simple commuter role. After riding around town daily you start biking for play, and can take leisurely rides out Scio Church Road or Geddes Road, which brings to mind longer camping trips like down Route l along the Pacific Coast or through the Blue Ridge Mountains in North Carolina. Most two-lane blacktop roads in this country are pleasant rides, as they're old roads that motorists have left for the expressways, and they travel through small quiet farm towns.

Several local groups provide organized bike trips, ranging from one day picnics, to several weeks seeing the U.S.A. or even Europe. One such group is the Bicycle League, which has regular meetings at the Ecology Center. American Youth Hostel (AYH) also has an active chapter in the city.