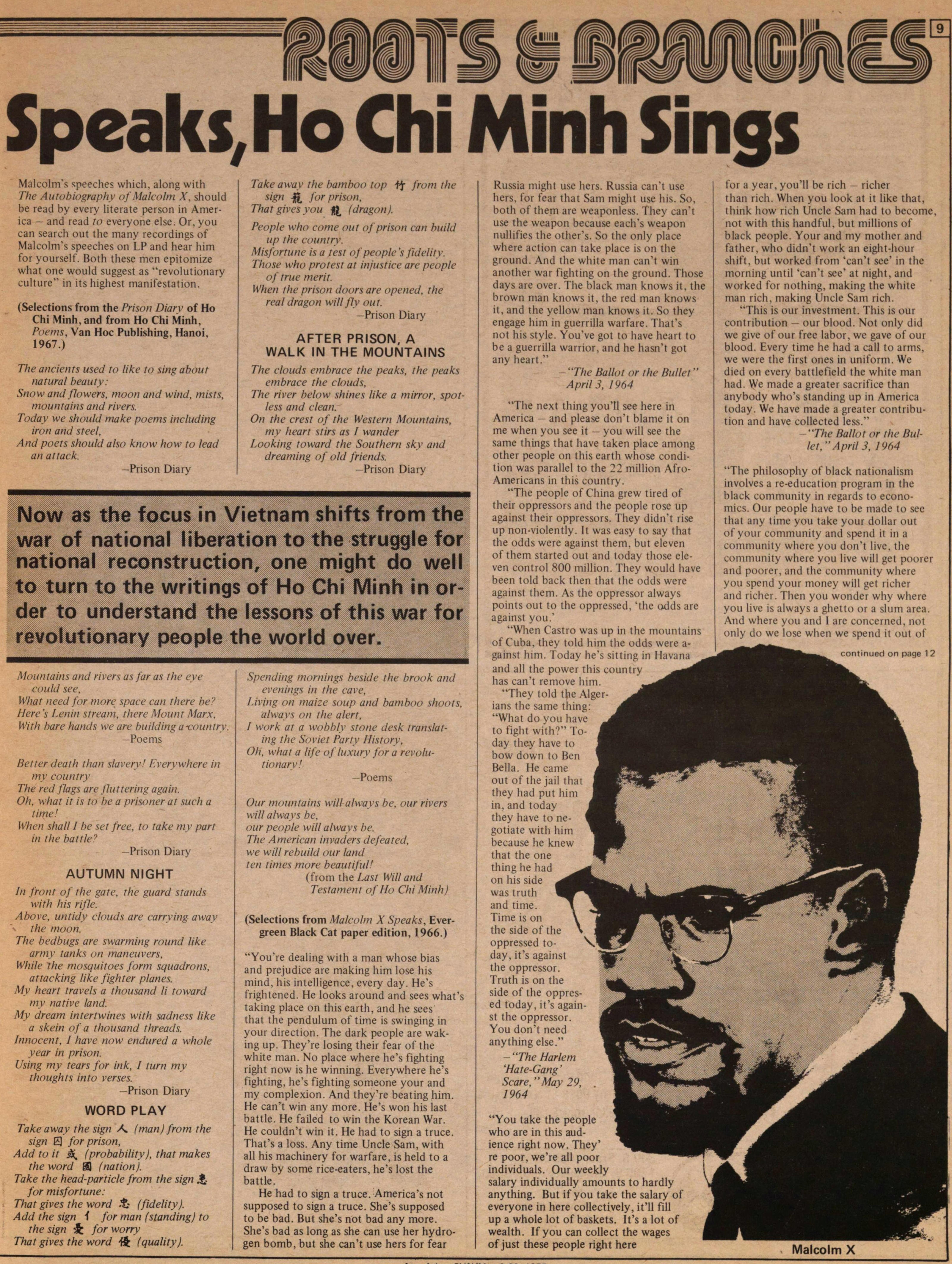 May 19th marks the birthdate of both Malcolm X and Ho Chi Minh, two modern-day revolutionaries whose work has had a tremendous impact on the lives of people in the United States.  Malcolm, a native of Michigan known earlier on the streets of Harlem as "Detroit Red," emerged in the early 1960's from Elijah Muhammad's Nation of Islam to become the first fiery national spokesman for black liberation.  His speeches to black audiences all over the U.S., and later to white people as well, gave full expression to the thoughts and feelings of millions of Afro-Americans (a term Malcolm popularized) who had theretofore realized such public strength only through the careful voice of their music.

Malcolm's rise to prominence as a public speaker and political organizer brought him not only a vast enthusiastic audience of black people but the ice-cold wrath of the American ruling class and its agents of government.  As Malcolm spoke out more and more clearly about the imperialistic designs and practices of the U.S. government, focusing particularly on the war in Vietnam and the bloody military action in the Congo and linking them with the oppression and exploitation of black people within the U.S., he moved directly into the sights of the CIA/FBI.  The trigger was squeezed at the Audubon Ballroom in Harlem on February 21, 1965, as Malcolm moved to address a regular Sunday afternoon meeting of his Organization of Afro-American Unity, and his powerful voice was stilled.

Malcolm's unprecedented example as an articulate apostle of black liberation inspired millions of people black and white, gained international attention and support for the black liberation struggle in America, and gave rise to a higher level of struggle in the second half of the sixties which, among many other great accomplishments, helped bring about the victorious ending of the Vietnamese revolution just now witnessed.

Ho Chi Minh, President of the Democratic Republic of Vietnam, life-long Vietnamese revolutionary, and central theorist of the Vietnamese liberation struggle, is one of the major political figures of our time.  First analyzing the concrete conditions in his native land and adopting revolutionary Marxism-Leninism as his guide to action, Uncle Ho began in the 1920's to organize for the liberation of his homeland.  Following Ho's lead, the Communist Party of Indochina (now the Vietnam Workers' Party), organized in 1930, began a 45-year struggle to free Vietnam from first French and then American imperialism.

On April 30, 1975, five and a half years after the death of Ho Chi Minh, the Vietnamese people won their final victory over outside control of their land, economy, and culture -- just as Ho had always said they would.  Now, as the focus in Vietnam shifts from the war of national liberation to the struggle for national reconstruction, one might do well to turn to the writings of Ho Chi Minh (a good start is Bernard Fall's collection, Ho Chi Minh on Revolution) in order to understand the very useful lessons of this war for revolutionary people all over the planet.

Ho Chi Minh was also an excellent poet (as is Mao Tse-Tung) whose verse clearly reflects his life work with as much precision and care as his political activities.  The following poems will give you a taste of the delightful riches to be found in this great man's work, both poetic and political:  they're taken from his Prison Diary (written in the early 40's) and from Ho Chi Minh, Poems, published in Hanoi in 1967.  The selections from Malcolm X which follow are taken from Malcolm X Speaks, Black Cat edition, a collection of Malcolm's speeches which, along with The Autobiography of Malcolm X, should be read by every literate person in America -- and read to everyone else.  Or, you can search out the many recordings of Malcolm's speeches on LP and hear him for yourself.  Both these men epitomize what one would suggest as "revolutionary culture" in its highest manifestation.

The ancients used to like to sing about natural beauty:

Snow and flowers, moon and wind, mists, mountains and rivers.

Today we should make poems including iron and steel,

And poets should also know how to lead an attack.

Mountains and rivers as far as the eye could see,

What need for more space can there be?

With bare hands we are building a country.

Better death than slavery!  Everywhere in my country

The red flags are fluttering again.

Oh, what it is to be a prisoner at such a time!

When shall I be set free, to take my part in the battle?

In front of the gate, the guard stands with his rifle.

Above, untidy clouds are carrying away the moon.

The bedbugs are swarming round like army tanks on maneuvers,

While the mosquitoes form squadrons, attacking like fighter planes.

My heart travels a thousand li toward my native land.

My dream intertwines with sadness like a skein of a thousand threads.

Innocent, I have now endured a whole year in prison.

Using my tears for ink, I turn my thoughts into verses.

That gives the word __ (fidelity).

Take away the bamboo top __ from the sign __ for prison,

People who come out of prison can build up the country.

Misfortune is a test of people's fidelity.

Those who protest at injustice are people of true merit.

When the prison doors are opened, the real dragon will fly out.

AFTER PRISON, A WALK IN THE MOUNTAINS

The river below shines like a mirror, spotless and clean.

On the crest of the Western Mountains, my heart stirs as l wander

Looking toward the Southern sky and dreaming of old friends.

Spending mornings beside the brook and evenings in the cave,

Living on maize soup and bamboo shoots, always on the alert,

I work at a wobbly stone desk translating the Soviet Party History,

Oh, what a life of luxury for a revolutionary!

our people will always be.

we will rebuild our land

(from the Last Will and Testament of Ho Chi Minh)

"You're dealing with a man whose bias and prejudice are making him lose his mind, his intelligence, every day.  He's frightened.  He looks around and sees what's taking place on this earth, and he sees that the pendulum of time is swinging in your direction.  The dark people are waking up.  They're losing their fear of the white man.  No place where he's fighting right now is he winning.  Everywhere he's fighting, he's fighting someone your and my complexion.  And they're beating him.  He can't win any more.  He's won his last battle.  He failed to win the Korean War.  He couldn't win it.  He had to sign a truce.  That's a loss.  Any time Uncle Sam, with all his machinery for warfare, is held to a draw by some rice-eaters, he's lost the battle.

He had to sign a truce.  America's not supposed to sign a truce.  She's supposed to be bad.  But she's not bad any more.  She's bad as long as she can use her hydrogen bomb, but she can't use hers for fear Russia might use hers.  Russia can't use hers, for fear that Sam might use his.  So, both of them are weaponless.  They can't use the weapon because each's weapon nullifies the other's.  So the only place where action can take place is on the ground.  And the white man can't win another war fighting on the ground.  Those days are over.  The black man knows it, the brown man knows it, the red man knows it, and the yellow man knows it.  So they engage him in guerrilla warfare.  That's not his style.  You've got to have heart to be a guerrilla warrior, and he hasn't got any heart."

"The next thing you'll see here in America -- and please don't blame it on me when you see it -- you will see the same things that have taken place among other people on this earth whose condition was parallel to the 22 million Afro-Americans in this country.

"When Castro was up in the mountains of Cuba, they told him the odds were against him.  Today he's sitting in Havana and all the power this country has can't remove him.

"You take the people who are in this audience right now.  They're poor, we're all poor individuals.  Our weekly salary individually amounts to hardly anything.  But if you take the salary of everyone in here collectively, it'll fill up a whole lot of baskets.  It's a lot of wealth.  If you can collect the wages of just these people right here for a year, you'll be rich -- richer than rich.  When you look at it like that, think how rich Uncle Sam had to become, not with this handful, but millions of black people.  Your and my mother and father, who didn't work an eight-hour shift, but worked from 'can't see' in the morning until 'can't see' at night, and worked for nothing, making the white man rich, making Uncle Sam rich.

"This is our investment. This is our contribution -- our blood.  Not only did we give of our free labor, we gave of our blood.  Every time he had a call to arms, we were the first ones in uniform.  We died on every battlefield the white man had.  We made a greater sacrifice than anybody who's standing up in America today.  We have made a greater contribution and have collected less."

This is in a separate box on this page:

Now as the focus in Vietnam shifts from the war of national liberation to the struggle for national reconstruction, one might do well to turn to the writings of Ho Chi Minh in order to understand the lessons of this war for revolutionary people the world over.