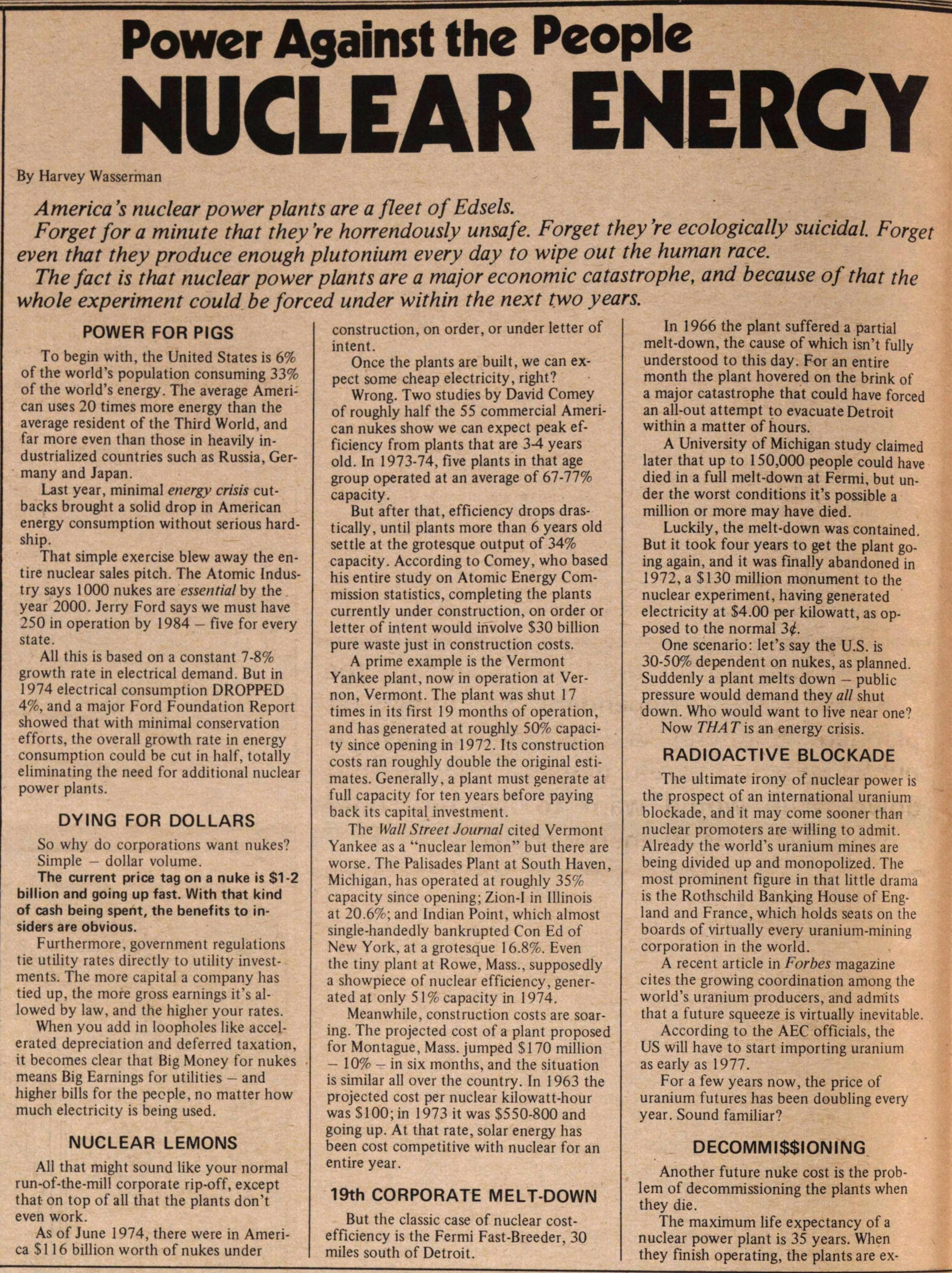 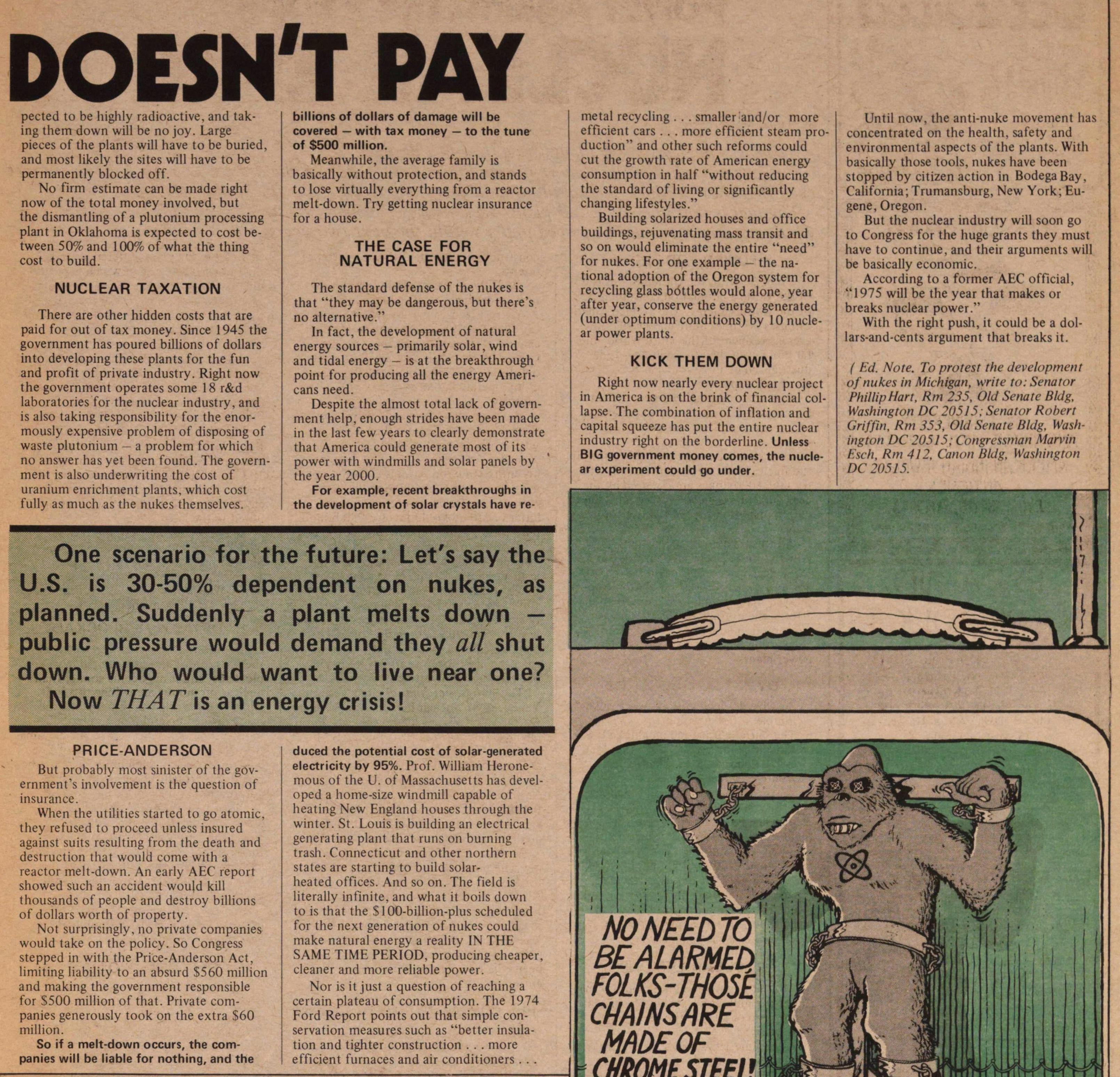 America 's nuclear power plants are a fleet of Edsels.

Forget for a minute that they're horrendously unsafe.  Forget they're ecologically suicidal.  Forget even that they produce enough plutonium every day to wipe out the human race.

The fact is that nuclear power plants are a major economic catastrophe, and because of that the whole experiment could be forced under within the next two years.

To begin with, the United States is 6% of the world's population consuming 33% of the world's energy.  The average American uses 20 times more energy than the average resident of the Third World, and far more even than those in heavily industrialized countries such as Russia, Germany and Japan.

That simple exercise blew away the entire nuclear sales pitch.  The Atomic Industry says 1000 nukes are essential by the year 2000.  Jerry Ford says we must have 250 in operation by 1984 -- five for every state.

All this is based on a constant 7-8% growth rate in electrical demand.  But in 1974 electrical consumption DROPPED 4%, and a major Ford Foundation Report showed that with minimal conservation efforts, the overall growth rate in energy consumption could be cut in half, totally eliminating the need for additional nuclear power plants.

So why do corporations want nukes?

The current price tag on a nuke is $1-2 billion and going up fast.  With that kind of cash being spent, the benefits to insiders are obvious.

Furthermore, government regulations tie utility rates directly to utility investments.  The more capital a company has tied up, the more gross earnings it's allowed by law, and the higher your rates.

When you add in loopholes like accelerated depreciation and deferred taxation, it becomes clear that Big Money for nukes means Big Earnings for Utilities -- and higher bills for the people, no matter how much electricity is being used.

All that might sound like your normal run-of-the-mill corporate rip-off, except that on top of all that the plants don't even work.

As of June 1974, there were in America $116 billion worth of nukes under construction, on order, or under letter of intent.

Once the plants are built, we can expect some cheap electricity, right?

Wrong.  Two studies by David Comey of roughly half the 55 commercial American nukes show we can expect peak efficiency from plants that are 3-4 years old.  In 1973-74, five plants in that age group operated at an average of 67-77% capacity.

But after that, efficiency drops drastically, until plants more than 6 years old settle at the grotesque output of 34% capacity.  According to Comey, who based his entire study on Atomic Energy Commission statistics, completing the plants currently under construction, on order or letter of intent would involve $30 billion pure waste just in construction costs.

A prime example is the Vermont Yankee plant, now in operation at Vernon, Vermont.  The plant was shut 17 times in its first 19 months of operation, and has generated at roughly 50% capacity since opening in 1972.  Its construction costs ran roughly double the original estimates.  Generally, a plant must generate at full capacity for ten years before paying back its capital investment.

The Wall Street Journal cited Vermont Yankee as a "nuclear lemon" but there are worse.  The Palisades Plant at South Haven, Michigan, has operated at roughly 35% capacity since opening; Zion-I in Illinois at 20.6%; and Indian Point, which almost single-handedly bankrupted Con Ed of New York, at a grotesque 16.8%.  Even the tiny plant at Rowe, Mass., supposedly a showpiece of nuclear efficiency, generated at only 51% capacity in 1974.

Meanwhile, construction costs are soaring.  The projected cost of a plant proposed for Montague, Mass. jumped $170 million -- 10% -- in six months, and the situation is similar all over the country.  In 1963 the projected cost per nuclear kilowatt-hour was $100; in 1973 it was $550-800 and going up.  At that rate, solar energy has been cost competitive with nuclear for an entire year.

But the classic case of nuclear cost-efficiency is the Fermi Fast-Breeder, 30 miles south of Detroit.

In 1966 the plant suffered a partial melt-down, the cause of which isn't fully understood to this day.  For an entire month the plant hovered on the brink of a major catastrophe that could have forced an all-out attempt to evacuate Detroit within a matter of hours.

A University of Michigan study claimed later that up to 150,000 people could have died in a full melt-down at Fermi, but under the worst conditions it's possible a million or more may have died.

Luckily, the melt-down was contained.  But it took four years to get the plant going again, and it was finally abandoned in 1972, a $130 million monument to the nuclear experiment, having generated electricity at $4.00 per kilowatt, as opposed to the normal 3¢.

One scenario:  let's say the U.S. is 30-50% dependent on nukes, as planned.  Suddenly a plant melts down -- public pressure would demand they all shut down.  Who would want to live near one?

Now THAT is an energy crisis.

The ultimate irony of nuclear power is the prospect of an international uranium blockade, and it may come sooner than nuclear promoters are willing to admit.  Already the world's uranium mines are being divided up and monopolized.  The most prominent figure in that little drama is the Rothschild Banking House of England and France, which holds seats on the boards of virtually every uranium-mining Corporation in the world.

A recent article in Forbes magazine cites the growing coordination among the world's uranium producers, and admits that a future squeeze is virtually inevitable.

According to the AEC officials, the US will have to start importing uranium as early as 1977.

For a few years now, the price of uranium futures has been doubling every year.  Sound familiar?

Another future nuke cost is the problem of decommissioning the plants when they die.

The maximum life expectancy of a nuclear power plant is 35 years.  When they finish operating, the plants are expected to be highly radioactive, and taking them down will be no joy.  Large pieces of the plants will have to be buried, and most likely the sites will have to be permanently blocked off.

No firm estimate can be made right now of the total money involved, but the dismantling of a plutonium processing plant in Oklahoma is expected to cost between 50% and 100% of what the thing cost to build.

There are other hidden costs that are paid for out of tax money.  Since 1945 the government has poured billions of dollars into developing these plants for the fun and profit of private industry.  Right now the government operates some 18 r&d laboratories for the nuclear industry, and is also taking responsibility for the enormously expensive problem of disposing of waste plutonium -- a problem for which no answer has yet been found.  The government is also underwriting the cost of uranium enrichment plants, which cost fully as much as the nukes themselves.

But probably most sinister of the government's involvement is the question of insurance.  When the utilities started to go atomic, they refused to proceed unless insured against suits resulting from the death and destruction that would come with a reactor melt-down.  An early AEC report showed such an accident would kill thousands of people and destroy billions of dollars worth of property.

Not surprisingly, no private companies would take on the policy.  So Congress stepped in with the Price-Anderson Act, limiting liability to an absurd $560 million and making the government responsible for $500 million of that.  Private companies generously took on the extra $60 million.

So if a melt-down occurs, the companies will be liable for nothing, and the billions of dollars of damage will be covered -- with tax money -- to the tune of $500 million.

Meanwhile, the average family is basically without protection, and stands to lose virtually everything from a reactor melt-down.  Try getting nuclear insurance for a house.

THE CASE FOR NATURAL ENERGY

The standard defense of the nukes is that "they may be dangerous, but there's no alternative."

In fact, the development of natural energy sources -- primarily solar, wind and tidal energy -- is at the breakthrough point for producing all the energy Americans need.

Despite the almost total lack of government help, enough strides have been made in the last few years to clearly demonstrate that America could generate most of its power with windmills and solar panels by the year 2000.

For example, recent breakthroughs in the development of solar crystals have reduced the potential cost of solar-generated electricity by 95%.  Prof. William Heronemous of the U. of Massachusetts has developed a home-size windmill capable of heating New England houses through the winter.  St. Louis is building an electrical generating plant that runs on burning trash.  Connecticut and other northern states are starting to build solar heated offices.  And so on.  The field is literally infinite, and what it boils down to is that the $100-billion-plus scheduled for the next generation of nukes could make natural energy a reality IN THE SAME TIME PERIOD, producing cheaper, cleaner and more reliable power.

Nor is it just a question of reaching a certain plateau of consumption.  The 1974 Ford Report points out that simple conservation measures such as "better insulation and tighter construction . . . more efficient furnaces and air conditioners . . . metal recycling . . . smaller and/or more efficient cars . . . more efficient steam production" and other such reforms could cut the growth rate of American energy consumption in half "without reducing the standard of living or significantly changing lifestyles."

Building solarized houses and office buildings, rejuvenating mass transit and so on would eliminate the entire "need" for nukes.  For one example - the national adoption of the Oregon system for recycling glass bottles would alone, year after year, conserve the energy generated (under optimum conditions) by 10 nuclear power plants.

Right now nearly every nuclear project in America is on the brink of financial collapse.  The combination of inflation and capital squeeze has put the entire nuclear industry right on the borderline.  Unless BIG government money comes, the nuclear experiment could go under.

Until now, the anti-nuke movement has concentrated on the health, safety and environmental aspects of the plants.  With basically those tools, nukes have been stopped by citizen action in Bodega Bay, California; Trumansburg, New York; Eugene, Oregon.

But the nuclear industry will soon go to Congress for the huge grants they must have to continue, and their arguments will be basically economic.

According to a former AEC official, "1975 will be the year that makes or breaks nuclear power."

With the right push, it could be a dollars-and-cents argument that breaks it.

In separate box on the page:

One scenario for the future:  Let's say the U.S. is 30-50% dependent on nukes, as planned.  Suddenly a plant melts down -- public pressure would demand they all shut down.  Who would want to live near one?

Now THAT is an energy crisis!