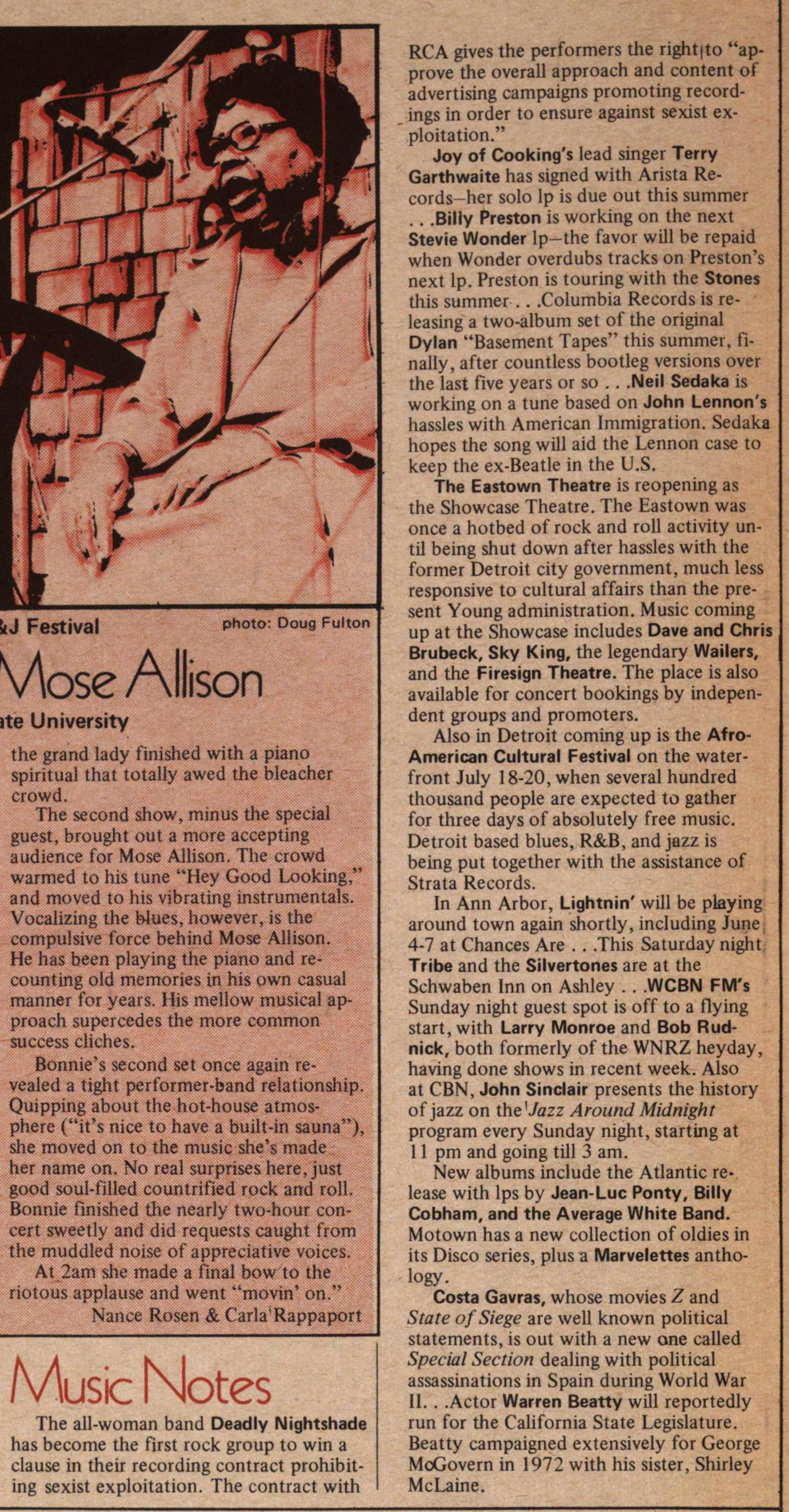 The all-woman band Deadly Nightshade has become the first rock group to win a clause in their recording contract prohibiting sexist exploitation. The contract with RCA gives the performers the rightto "approve the overall approach and content of advertising campaigns promoting recordings in order to ensure against sexist exploitation." Joy of Cooking's lead singer Terry Garthwaite has signed with Arista Records-her solo lp is due out this summer . . .Billy Preston is working on the next Stevie Wonder lp- the favor will be repaid when Wonder overdubs tracks on Preston's next lp. Preston is touring with the Stones this summer . . .Columbia Records is releasing a two-album set of the original Dylan "Basement Tapes" this summer, finally, after countless bootleg versions over the last five years or so . . .Neil Sedaka is working on a tune based on John Lennon's hassles with American Immigration. Sedaka hopes the song will aid the Lennon case to keep the ex-Beatle in the U.S. The Eastown Theatre is reopening as the Showcase Theatre. The Eastown was once a hotbed of rock and roll activity until being shut down after hassles with the former Detroit city government, much less responsive to cultural affairs than the present Young administration. Music coming up at the Showcase includes Dave and Chris Brubeck, Sky King, the legendary Wailers, and the Firesign Theatre. The place is also available for concert bookings by independent groups and promoters. Also in Detroit coming up is the AfroAmerican Cultural Festival on the waterfront July 18-20, when several hundred thousand people are expected to gather for three days of absolutely free music. Detroit based blues, R&B, and jazz is being put together with the assistance of Strata Records. In Ann Arbor, Lightnin' will be pkying around town again shortly, including June 4-7 at Chances Are . . .This Saturday night Tribe and the Silvertones are at the Schwaben Inn on Ashley . . .WCBN FM's Sunday night guest spot is off to a flying start, with Larry Monroe and Bob Rudnick, both formerly of the WNRZ heyday, having done shows in recent week. Also at CBN, John Sinclair presents the history of jazz on the Jazz Around Midnight program every Sunday night, starting at 1 1 pm and going till 3 am. New albums include the Atlantic release with lps by Jean-Luc Ponty, Billy Cobham, and the Average White Band. Motown has a new collection of oldies in its Disco series, plus a Marvelettes anthology. Costa Gavras, whose movies Z and State ofSiege are well known political statements, is out with a new one called Special Section dealing with political assassinations in Spain during World War II. . .Actor Warren Beatty will reportedly run for the California State Legislature. Beatty campaigned extensively for George MoGovern in 1972 with his sister, Shirley McLaine.