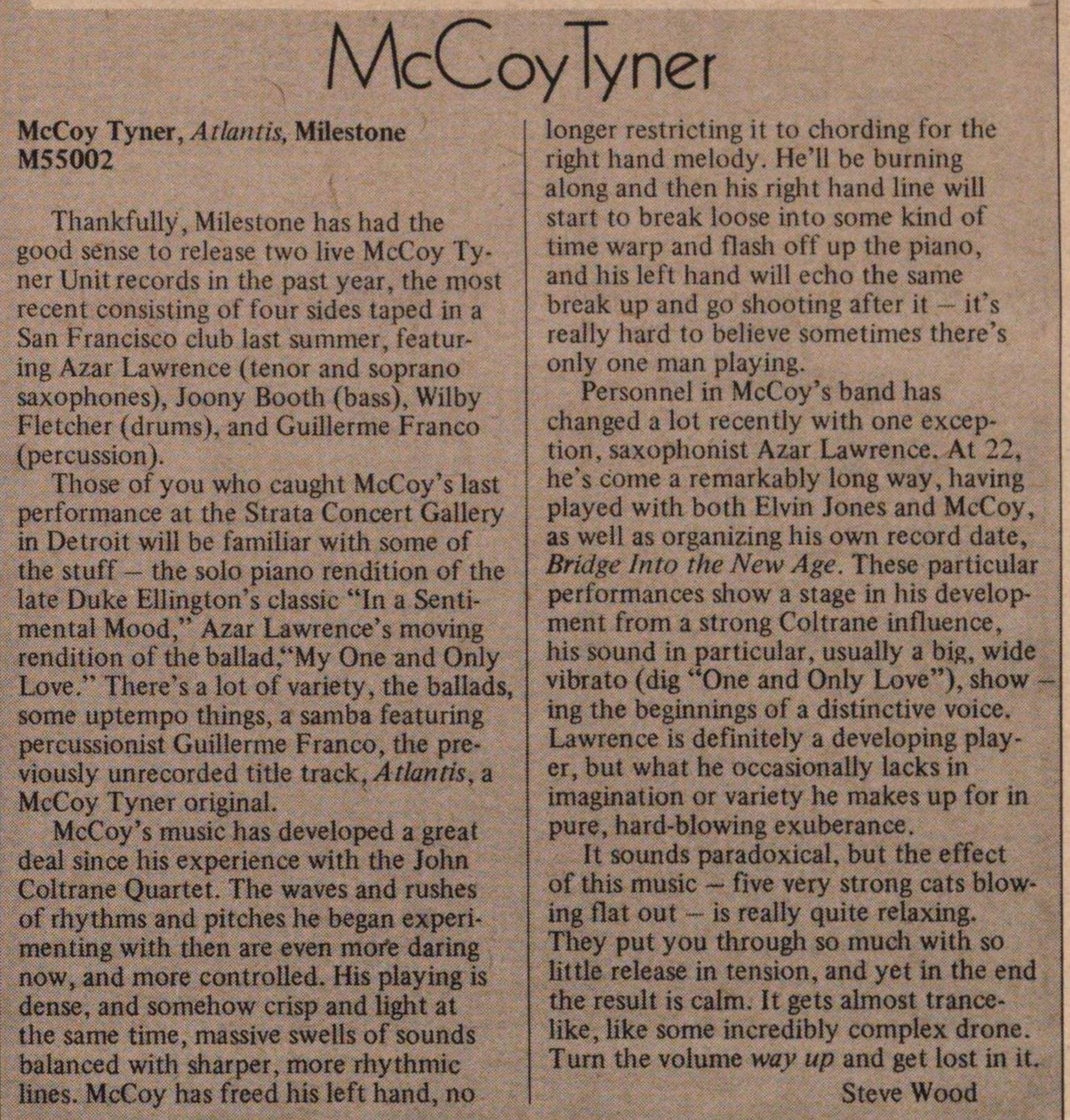 McCoy Tyner, Atlantis, Milestone M55OO2 Thankfully, Milestone has had the good sense to release two live McCoy Tyner Unit records in the past year, the most recent consisting of four sides taped in a San Francisco club last summer, featuring Azar Lawrence (tenor and soprano saxophones), Joony Booth (bass), Wilby Fletcher (drums), and Guillerme Franco (percussion). Those of you who caught McCoy's last performance at the Strata Concert Gallery in Detroit will be familiar with some of the stuff - the solo piano rendition of the late Duke Ellington's classic "In a Sentimental Mood," Azar Lawrence's moving rendition of the ballad,"My One and Only Love." There's a lot of variety, the ballads, some uptempo things, a samba featuring percussionist Guillerme Franco, the previously unrecorded title track, Atlantis, a McCoy Tyner original. McCoy's rnusic has developed a great deal since his experience with the John Coltrane Quartet. The waves and rushes of rhythms and pitches he began experimenting with then are even mofe daring now, and more controlled. His playing is dense, and somehow crisp and light at the same time, massive swells of sounds balanced with sharper, more rhythmic Unes. McCoy has freed his left hand, no longer restricting it to chording for the right hand meludy. He'll be burning along and then his right hand line will start to break loose into some kind of time warp and flash off up the piano, and his left hand will echo the same break up and go shooting after it - it's really hard to believe sometimes there's only one man playing. Personnel in McCoy's band has changed a lol recently with one exception, saxophonist Azar Lawrence. At 22, he's come a remarkably long way, having played with both Elvin Jones and McCoy, as well as organizing his own record date, Bridge Into the New Age. These particular performances show a stage in his development from a strong Coltrane influence, his sound in particular, usually a big, wide vibrato (dig "One and Only Love"), show - ing the beginnings of a distinctive voice. Lawrence is definitely a developing player, but what he occasionally lacks in imagination or variety he makes up for in pure, hard-blowing exuberance. It sounds paradoxical, but the effect of this music - five very strong cats blowing flat out - is really quite relaxing. They put you through so much with so little release in tensión, and yet in the end the result is calm. It gets almost traxicelike, like some incredibly complex drone. Turn the volume way up and get lost in it.