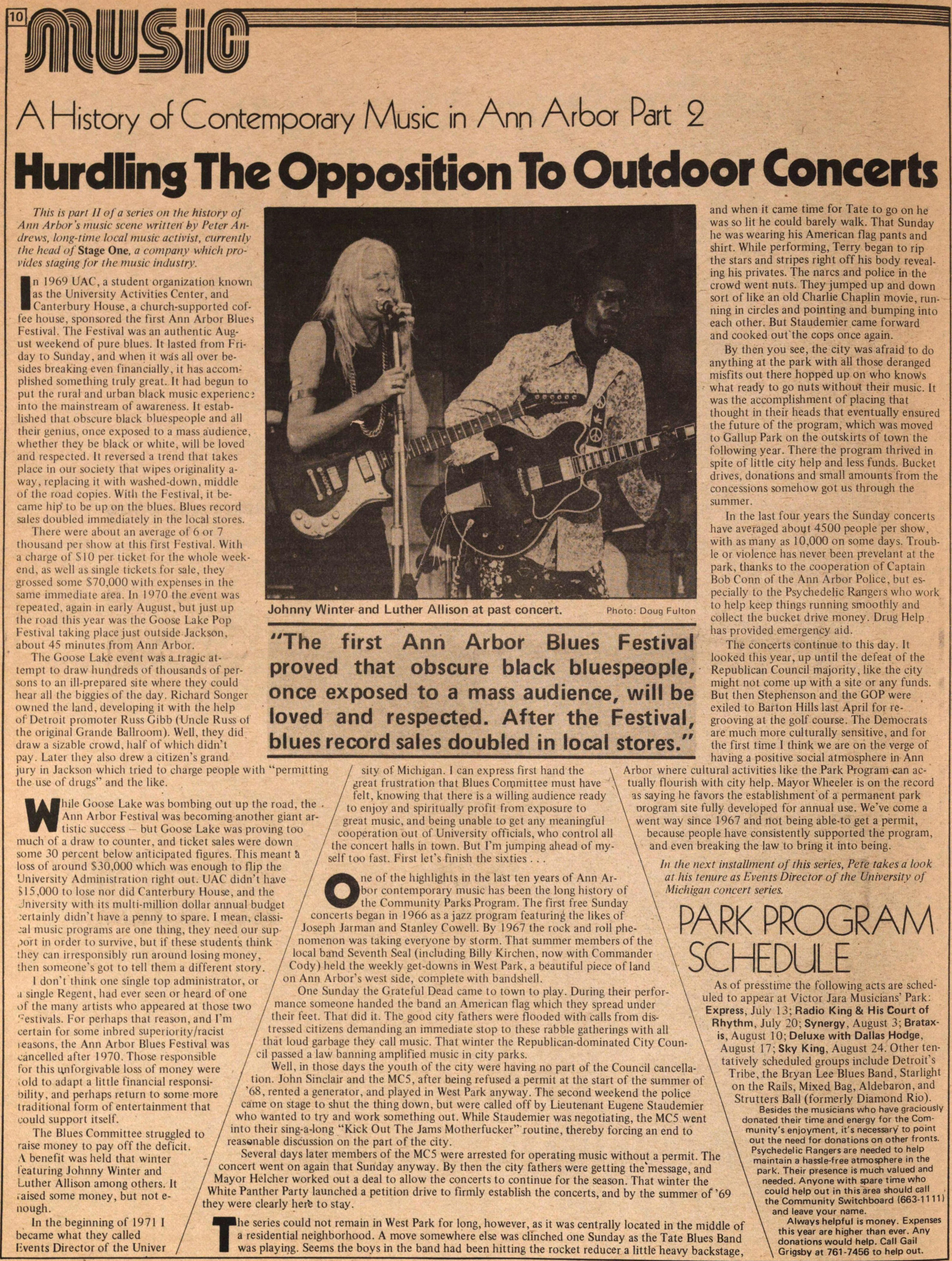 This is part II of a series on the history of Ann Arbor's music scene written by Peter Andrews, long-time local music activist, currently the head of Stage One, a company which provides staging for the music industry.

In 1969 UAC, a student organization known as the University Activities Center, and Canterbury House, a church-supported coffee house, sponsored the first Ann Arbor Blues Festival. The Festival was an authentic August weekend of pure blues. It lasted from Friday to Sunday, and when it was all over besides breaking even financially, it has accomplished something truly great. It had begun to put the rural and urban black music experience into the mainstream of awareness. It established that obscure black bluespeople and all their genius, once exposed to a mass audience, whether they be black or white, will be loved and respected. It reversed a trend that takes place in our society that wipes originality away, replacing it with washed-down, middle of the road copies. With the Festival, it became hip to be up on the blues. Blues record sales doubled immediately in the local stores.

There were about an average of 6 or 7 thousand per show at this first Festival. With a charge of $10 per ticket tor the whole weekend, as well as single tickets tor sale, they grossed some $70,000 with expenses in the same immediate area. In l970 the event was repeated, again in early August, but just up the road this year was the Goose Lake Pop Festival taking place just outside Jackson, about 45 minutes from Ann Arbor.

The Goose Lake event was a tragic attempt to draw hundreds of thousands of persons to an ill-prepared site where they could hear all the biggies of the day. Richard Songer owned the land, developing it with the help of Detroit promoter Russ Gibb (Uncle Russ of the original Grande Ballroom). Well, they did draw a sizable crowd, half of which didn't pay. Later they also drew a citizen's grand jury in Jackson which tried to charge people with "permitting the use of drugs" and the like.

While Goose Lake was bombing out up the road, the Ann Arbor Festival was becoming another giant artistic success - but Goose Lake was proving too much of a draw to counter, and ticket sales were down some 30 percent below anticipated figures. This meant a loss of around $30,000 which was enough to flip the University Administration right out. UAC didn't have $15,000 to lose nor did Canterbury House, and the University with its multi-million dollar annual budget certainly didn't have a penny to spare. I mean classical music programs are one thing, they need our support in order to survive, but if these students think they can irresponsibly run around losing money, then someone's got to tell them a different story.

I don't think one single top administrator, or a single Regent, had ever seen or heard of one of the many artists who appeared at those two Festivals. For perhaps that reason, and I'm certain for some inbred superiority/racist reasons, the Ann Arbor Blues Festival was cancelled after 1970. Those responsible for this unforgivable loss of money were told to adapt a little financial responsibility, and perhaps return to some more traditional form of entertainment that would support itself.

The Blues Committee struggled to raise money to pay off the deficit. A benefit was held that winter featuring Johnny Winter and Luther Allison among others. It raised some money, but not enough.

In the beginning of 1971 I became What they called Events Director of the University of Michigan. I can express first hand the great frustration that Blues Committee must have felt, knowing that there is a willing audience ready to enjoy and spiritually profit from exposure to great music, and being unable to get any meaningful cooperation out of University officials, who control all the concert halls in town. But I'm jumping ahead of myself too fast. First let's finish the sixties . . .

One of the highlights in the last ten years of Ann Arbor contemporary music has been the long history of the Community Parks Program. The first free Sunday concerts began in 1966 as a jazz program featuring the likes of Joseph Jarman and Stanley Cowell. By 1967 the rock and roll phenomenon was taking everyone by storm. That summer members of the local band Seventh Seal (including Billy Kirchen, now with Commander Cody) held the weekly get-downs in West Park, a beautiful piece of land on Ann Arbor's west side, complete with bandshell.

One Sunday the Grateful Dead came to town to play. During their performance someone handed the band an American flag which they spread under their feet. That did it. The good city fathers were flooded with calls from distressed citizens demanding an immediate stop to these rabble gatherings with all that loud garbage they call music. That winter the Republican-dominated City Council passed a law banning amplified music in city parks.

Well, in those days the youth of the city were having no part of the Council cancelation. John Sinclair and the MC5, after being refused a permit at the start of the summer of '68, rented a generator, and played in West Park anyway. The second weekend the police came on stage to shut the thing down, but were called off by Lieutenant Eugene Staudemier who wanted to try and work something out. While Staudemier was negotiating, the MC5 went into their sing-a-long "Kick Out The Jams Motherfucker" routine, thereby forcing an end to reasonable discussion on the part of the city.

Several days later members of the MC5 were arrested for operating music without a permit. The concert went on again that Sunday anyway. By then the city fathers were getting the message, and Mayor Helcher worked out a deal to allow the concerts to continue for the season. That winter the White Panther Party launched a petition drive to firmly establish the concerts, and by the summer of '69 they were clearly here to stay.

The series could not remain in West Park for long, however, as it was centrally located in the middle of a residential neighborhood. A move somewhere else was clinched one Sunday as the Tate Blues Band was playing. Seems the boys in the band had been hitting the rocket reducer a little heavy backstage, and when it came time for Tate to go on he was so lit he could barely walk. That Sunday he was wearing his American flag pants and shirt. While performing, Terry began to rip the stars and stripes right off his body revealing his privates. The narcs and police in the crowd went nuts. They jumped up and down sort of like an old Charlie Chaplin movie, running in circles and pointing and bumping into each other. But Staudemier came forward and cooked out the cops once again.

By then you see, the city was afraid to do anything at the park with all those deranged misfits out there hopped up on who knows what ready to go nuts without their music. It was the accomplishment of placing that thought in their heads that eventually ensured the future of the program, which was moved to Gallup Park on the outskirts of town the following year. There the program thrived in spite of little city help and less funds. Bucket drives, donations and small amounts from the concessions somehow got us through the summer.

In the last four years the Sunday concerts have averaged about 4500 people per show, with as many as 10,000 on some days. Trouble or violence has never been prevelant at the park, thanks to the cooperation of Captain Bob Conn of the Ann Arbor Police, but especially to the Psychedelic Rangers who work to help keep things running smoothly and collect the bucket drive money. Drug Help has provided emergency aid.

The concerts continue to this day. It looked this year, up until the defeat of the Republican Council majority, like the city might not come up with a site or any funds. But then Stephenson and the GOP were exiled to Barton Hills last April for re-grooving at the golf course. The Democrats are much more culturally sensitive, and for the first time I think we are on the verge of having a positive social atmosphere in Ann Arbor where cultural activities like the Park Program can actually flourish with city help. Mayor Wheeler is on the record as saying he favors the establishment of a permanent park program site fully developed for annual use. We've come a went way since 1967 and not being able to get a permit, because people have consistently supported the program, and even breaking the law to bring it into being.

In the next installment of this series. Pete takes a look at his tenure as Events Director of the University of Michigan concert series.

Besides the musicians who have graciously donated their time and energy for the Community’s enjoyment, it’s necessary to point out the need for donations on other fronts. Psychedelic Rangers are needed to help maintain a hassle-free atmosphere in the park. Their presence is much valued and needed. Anyone with spare time who could help out in this area should call the Community Switchboard (663-1111) and leave your name.

Always helpful is money. Expenses this year are higher than ever. Any donations would help. Call Gail Grigsby at 761-7456 to help out.