Welcome To The Art Fair 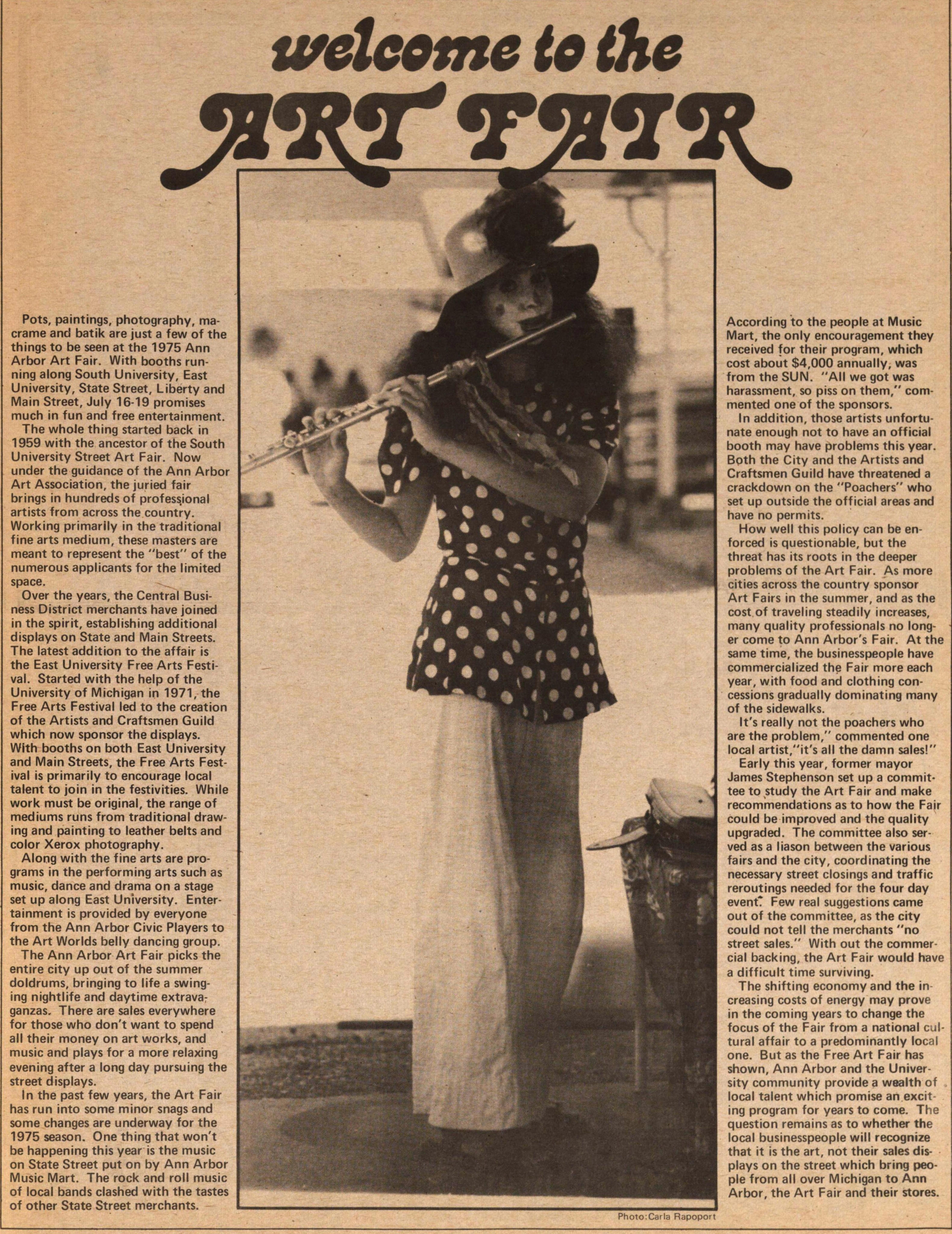 welcome to the ART FAIR

Pots, paintings, photography, macrame and batik are just a few of the things to be seen at the 1975 Ann Arbor Art Fair. With booths running along South University, East University, State Street, Liberty and Main Street, July 16-19 promises much in fun and free entertainment.

The whole thing started back in 1959 with the ancestor of the South University Street Art Fair. Now under the guidance of the Ann Arbor Art Association, the juried fair brings in hundreds of professional artists from across the country. Working primarily in the traditional fine arts medium, these masters are meant to represent the "best" of the numerous applicants for the limited space.

Over the years, the Central Business District merchants have joined in the spirit, establishing additional displays on State and Main Streets. The latest addition to the affair is the East University Free Arts Festival. Started with the help of the University of Michigan in 1971, the Free Arts Festival led to the creation of the Artists and Craftsmen Guild which now sponsor the displays. With booths on both East University and Main Streets, the Free Arts Festival is primarily to encourage local talent to join in the festivities. While work must be original, the range of mediums runs from traditional drawing and painting to leather belts and color Xerox photography.

Along with the fine arts are programs in the performing arts such as music, dance and drama on a stage set up along East University. Entertainment is provided by everyone from the Ann Arbor Civic Players to the Art Worlds belly dancing group.

The Ann Arbor Art Fair picks the entire city up out of the summer doldrums, bringing to life a swinging nightlife and daytime extravaganzas. There are sales everywhere for those who don't want to spend all their money on art works, and music and plays for a more relaxing evening after a long day pursuing the street displays.

In the past few years, the Art Fair has run into some minor snags and some changes are underway for the 1975 season. One thing that won't be happening this year is the music on State Street put on by Ann Arbor Music Mart. The rock and roll music of local bands clashed with the tastes of other State Street merchants.

According to the people at Music Mart, the only encouragement they received for their program, which cost about $4,000 annually, was from the SUN. "All we got was harassment, so piss on them," commented one of the sponsors.

In addition, those artists unfortunate enough not to have an official booth may have problems this year. Both the City and the Artists and Craftsmen Guild have threatened a crackdown on the "Poachers" who set up outside the official areas and have no permits.

How well this policy can be enforced is questionable, but the threat has its roots in the deeper problems of the Art Fair. As more cities across the country sponsor Art Fairs in the summer, and as the cost of traveling steadily increases, many quality professionals no longer come to Ann Arbor's Fair. At the same time, the businesspeople have commercialized the Fair more each year, with food and clothing concessions gradually dominating many of the sidewalks.

"It's really not the poachers who are the problem," commented one local artist, "it's all the damn sales!"

Early this year, former mayor James Stephenson set up a committee to study the Art Fair and make recommendations as to how the Fair could be improved and the quality upgraded. The committee also served as a liason between the various fairs and the city, coordinating the necessary street closings and traffic reroutings needed for the four day event. Few real suggestions came out of the committee, as the city could not tell the merchants "no street sales." Without the commercial backing, the Art Fair would have a difficult time surviving.

The shifting economy and the in creasing costs of energy may prove in the coming years to change the focus of the Fair from a national cultural affair to a predominantly local one. But as the Free Art Fair has shown, Ann Arbor and the University community provide a wealth of local talent which promise an exciting program for years to come. The question remains as to whether the local businesspeople will recognize that it is the art, not their sales displays on the street which bring people from all over Michigan to Ann Arbor, the Art Fair and their stores.