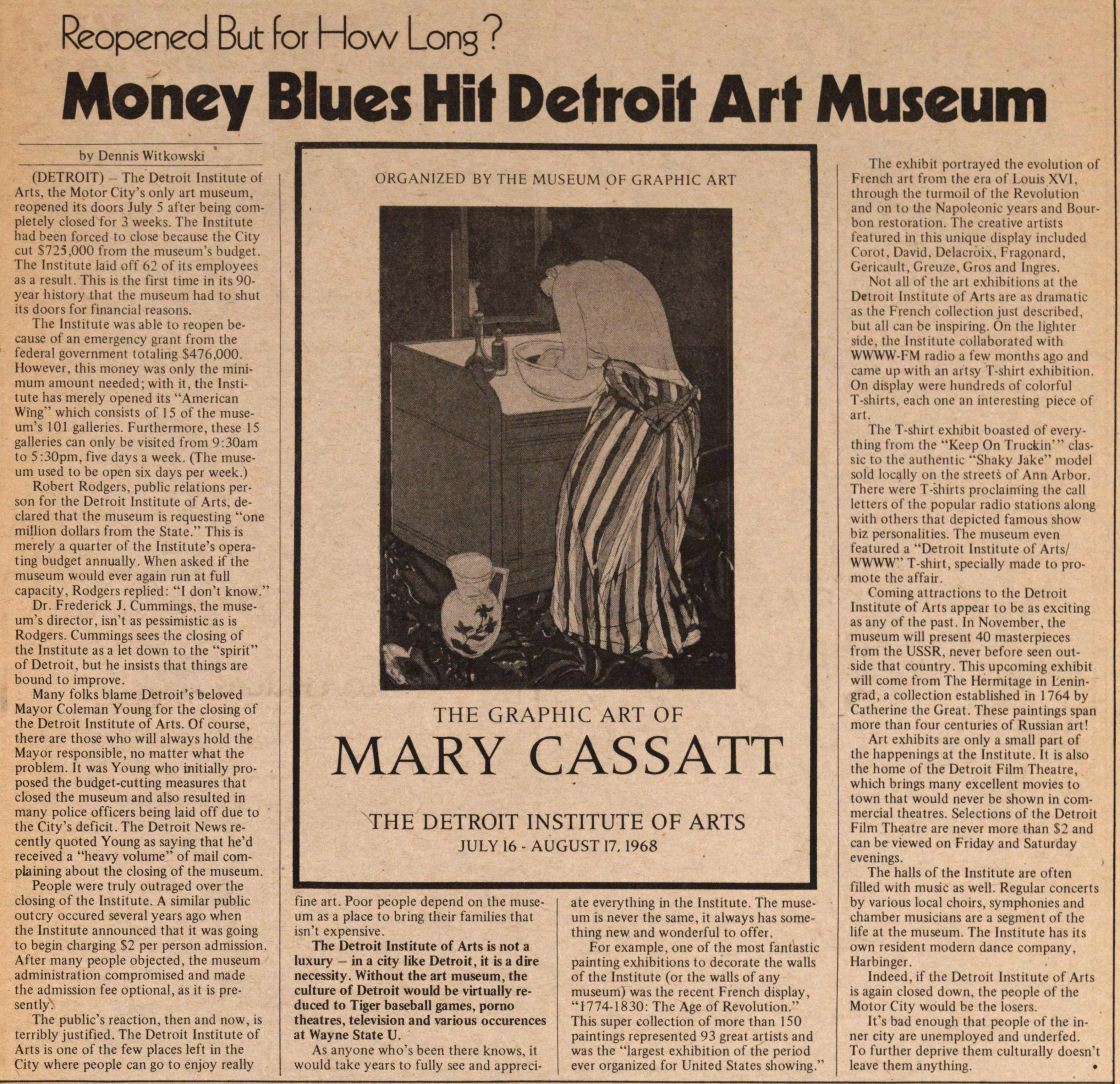 Reopened But for How Long?

(DETROIT) - The Detroit Institute of Arts, the Motor City's only art museum, reopened its doors July 5 after being completely closed for 3 weeks. The Institute had been forced to close because the City cut $725,000 from the museum's budget. The Institute laid off 62 of its employees as a result. This is the first time in its 90year history that the museum had to shut its doors for financial reasons.

The Institute was able to reopen because of an emergency grant from the federal government totaling $476,000. However, this money was only the minimum amount needed; with it, the Institute has merely opened its "American Wing" which consists of 15 of the museum's 101 galleries. Furthermore, these 15 galleries can only be visited from 9:30am to 5:30 pm, five days a week. (The museum used to be open six days per week.)

Robert Rodgers, public relations person for the Detroit Institute of Arts, declared that the museum is requesting "one million dollars from the State." This is merely a quarter of the Institute's operating budget annually. When asked if the museum would ever again run at full capacity, Rodgers replied: "I don't know."

Dr. Frederick J. Cummings, the museum's director, isn't as pessimistic as is Rodgers. Cummings sees the closing of the Institute as a let down to the "spirit" of Detroit, but he insists that things are bound to improve.

Many folks blame Detroit's beloved Mayor Coleman Young for the closing of the Detroit Institute of Arts. Of course, there are those who will always hold the Mayor responsible, no matter what the problem. It was Young who initially proposed the budget-cutting measures that closed the museum and also resulted in many police officers being laid off due to the City's deficit. The Detroit News recently quoted Young as saying that he'd received a "heavy volume" of mail complaining about the closing of the museum.

People were truly outraged over the closing of the Institute. A similar public outcry occurred several years ago when the Institute announced that it was going to begin charging $2 per person admission. After many people objected, the museum administration compromised and made the admission fee optional, as it is presently.

The public's reaction, then and now, is terribly justified. The Detroit Institute of Arts is one of the few places left in the City where people can go to enjoy really fine art. Poor people depend on the museum as a place to bring their families that isn't expensive.

As anyone who's been there knows, it would take years to fully see and appreciate everything in the Institute. The museum is never the same, it always has something new and wonderful to offer.

For example, one of the most fantastic painting exhibitions to decorate the walls of the Institute (or the walls of any museum) was the recent French display, "1774-1830: The Age of Revolution." This super collection of more than 150 paintings represented 93 great artists and was the "largest exhibition of the period ever organized for United States showing." The exhibit portrayed the evolution of French art from the era of Louis XVI, through the turmoil of the Revolution and on to the Napoleonic years and Bourbon restoration. The creative artists featured in this unique display included Corot, David, Delacroix, Fragonard, Gericault, Greuze, Gros and Ingres.

Not all of the art exhibitions at the Detroit Institute of Arts are as dramatic as the French collection just described, but all can be inspiring. On the lighter side, the Institute collaborated with WWWW-FM radio a few months ago and came up with an artsy T-shirt exhibition. On display were hundreds of colorful T-shirts, each one an interesting piece of art.

The T-shirt exhibit boasted of everything from the "Keep On Truckin'" classic to the authentic "Shaky Jake" model sold locally on the streets of Ann Arbor. There were T-shirts proclaiming the call letters of the popular radio stations along with others that depicted famous show biz personalities. The museum even featured a "Detroit Institute of Arts / WWWW" T-shirt, specially made to promote the affair.

Coming attractions to the Detroit Institute of Arts appear to be as exciting as any of the past. In November, the museum will present 40 masterpieces from the USSR, never before seen outside that country. This upcoming exhibit will come from The Hermitage in Leningrad, a collection established in 1764 by Catherine the Great. These paintings span more than four centuries of Russian art!

The halls of the Institute are often filled with music as well. Regular concerts by various local choirs, symphonies and chamber musicians are a segment of the life at the museum. The Institute has its own resident modern dance company, Harbinger.

Indeed, if the Detroit Institute of Arts is again closed down, the people of the Motor City would be the losers.

It's bad enough that people of the inner city are unemployed and underfed. To further deprive them culturally doesn't leave them anything.