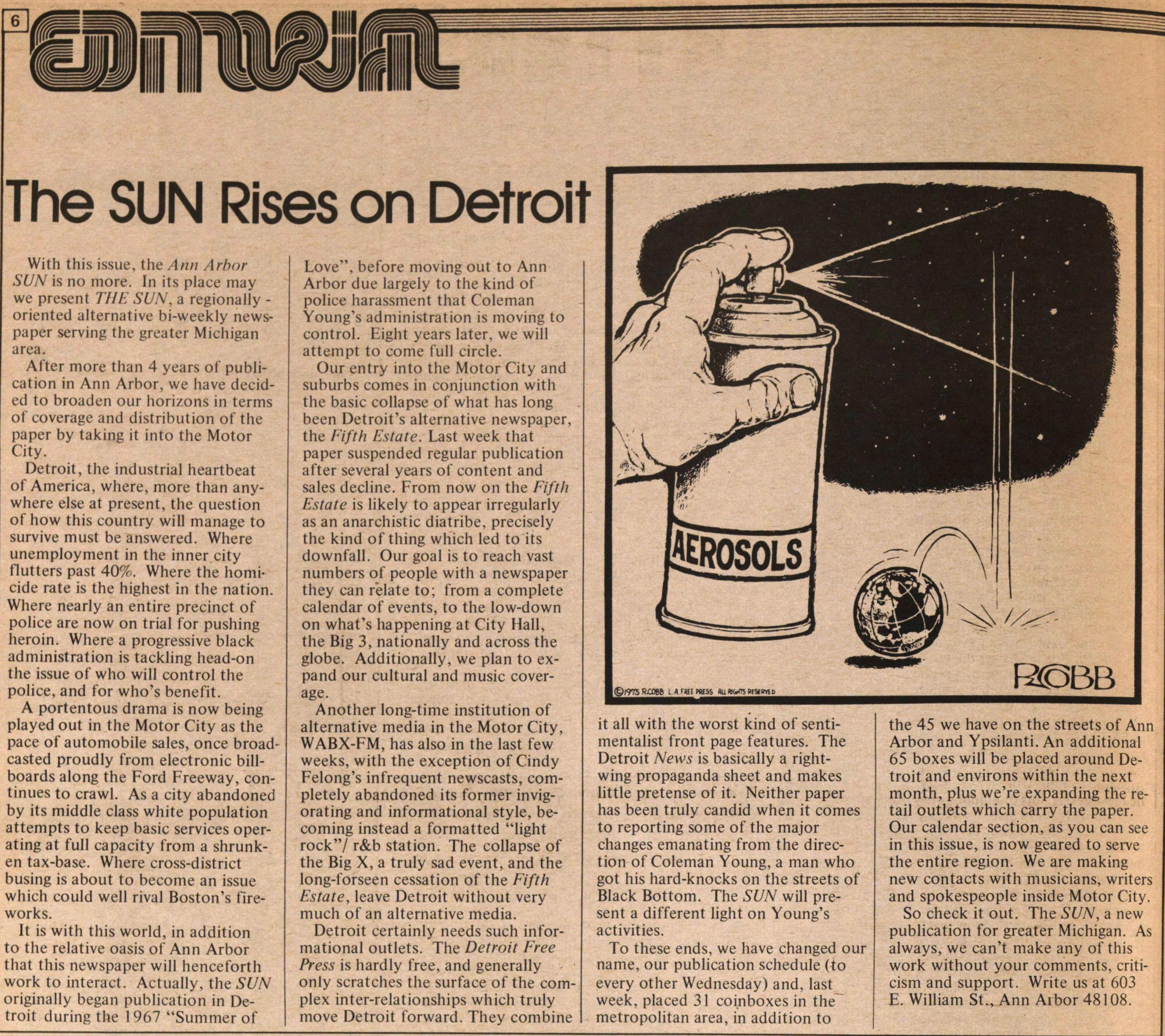 With this issue, the Ann Arbor SUN is no more. In its place may we present THE SUN, a regionally-oriented alternative bi-weekly newspaper serving the greater Michigan area.

After more than 4 years of publication in Ann Arbor, we have decided to broaden our horizons in terms of coverage and distribution of the paper by taking it into the Motor City.

Detroit, the industrial heartbeat of America, where, more than anywhere else at present, the question of how this country will manage to survive must be answered. Where unemployment in the inner city flutters past 40%. Where the homicide rate is the highest in the nation. Where nearly an entire precinct of police are now on trial for pushing heroin. Where a progressive black administration is tackling head-on the issue of who will control the police, and for who's benefit.

A portentous drama is now being played out in the Motor City as the pace of automobile sales, once broadcasted proudly from electronic billboards along the Ford Freeway, continues to crawl. As a city abandoned by its middle class white population attempts to keep basic services operating at full capacity from a shrunken tax-base. Where cross-district busing is about to become an issue which could well rival Boston's fireworks.

It is with this world, in addition to the relative oasis of Ann Arbor that this newspaper will henceforth work to interact. Actually, the SUN originally began publication in Detroit during the 1967 "Summer of Love", before moving out to Ann Arbor due largely to the kind of police harassment that Coleman Young's administration is moving to control. Eight years later, we will attempt to come full circle.

Our entry into the Motor City and suburbs comes in conjunction with the basic collapse of what has long been Detroit's alternative newspaper, the Fifth Estate. Last week that paper suspended regular publication after several years of content and sales decline. From now on the Fifth Estate is likely to appear irregularly as an anarchistic diatribe, precisely the kind of thing which led to its downfall. Our goal is to reach vast numbers of people with a newspaper they can relate to; from a complete calendar of events, to the low-down on what's happening at City Hall, the Big 3, nationally and across the globe. Additionally, we plan to expand our cultural and music coverage.

Another long-time institution of alternative media in the Motor City, WABX-FM, has also in the last few weeks, with the exception of Cindy Felong's infrequent newscasts, completely abandoned its former invigorating and informational style, becoming instead a formatted "light rock" / r&b station. The collapse of the Big X, a truly sad event, and the long-forseen cessation of the Fifth Estate, leave Detroit without very much of an alternative media.

Detroit certainly needs such informational outlets. The Detroit Free Press is hardly free, and generally only scratches the surface of the complex inter-relationships which truly move Detroit forward. They combine it all with the worst kind of sentimentalist front page features. The Detroit News is basically a rightwing propaganda sheet and makes little pretense of it. Neither paper has been truly candid when it comes to reporting some of the major changes emanating from the direction of Coleman Young, a man who got his hard-knocks on the streets of Black Bottom. The SUN will present a different light on Young's activities.

To these ends, we have changed our name, our publication schedule (to every other Wednesday) and, last week, placed 31 coinboxes in the metropolitan area, in addition to the 45 we have on the streets of Arm Arbor and Ypsilanti. An additional 65 boxes will be placed around Detroit and environs within the next month, plus we're expanding the retail outlets which carry the paper. Our calendar section, as you can see in this issue, is now geared to serve the entire region. We are making new contacts with musicians, writers and spokespeople inside Motor City.

So check it out. The SUN, a new publication for greater Michigan. As always, we can't make any of this work without your comments, criticism and support. Write us at 603 E. William St., Ann Arbor 48108.