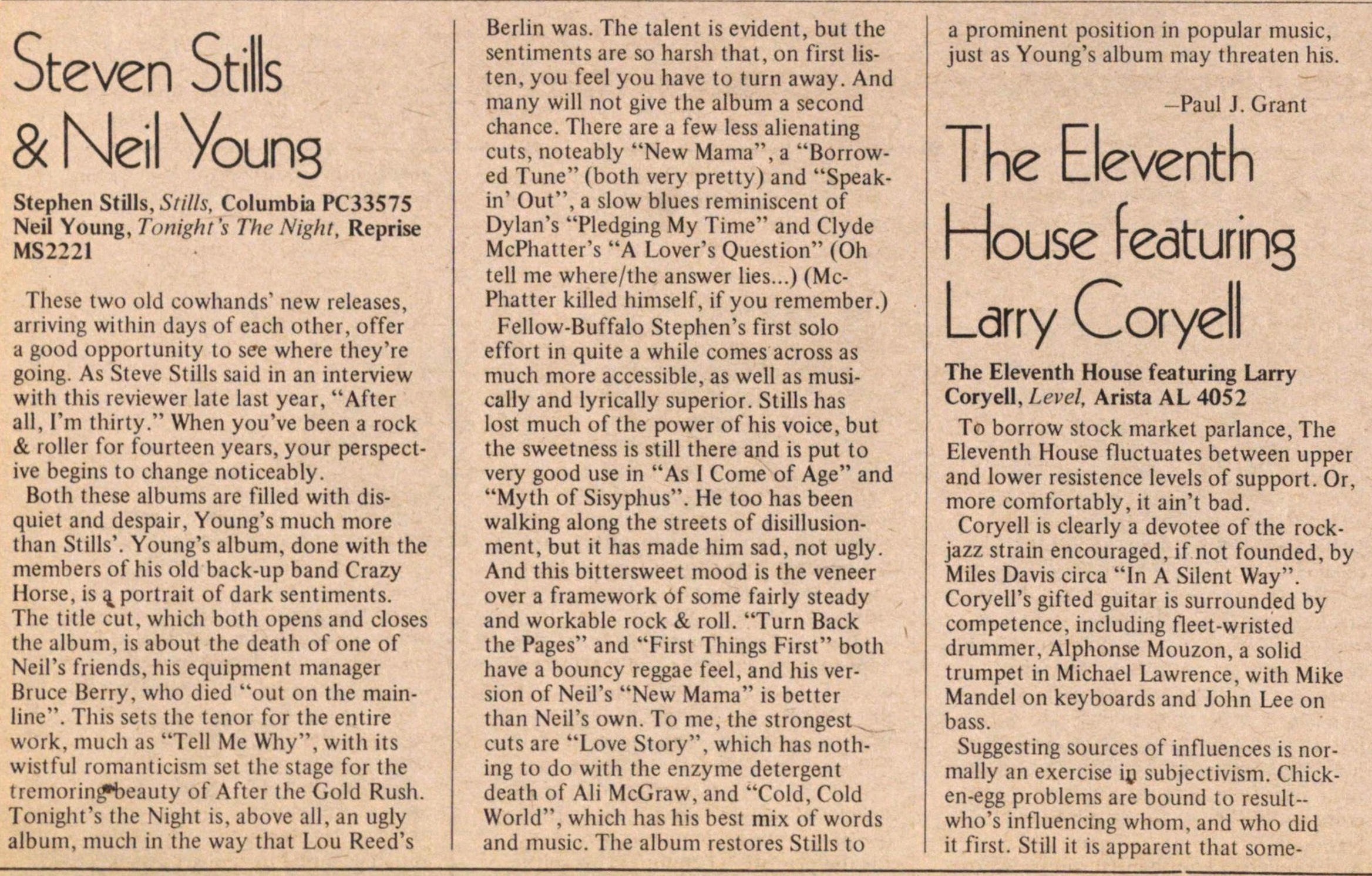 These two old cowhands' new releases, arriving within days of each other, offer a good opportunity to see where they're going. As Steve Stills said in an interview with this reviewer late last year, "After all, l'm thirty." When you've been a rock & roller for fourteen years, your perspective begins to change noticeably.

Both these albums are filled with disquiet and despair, Young's much more than Stills'. Young's album, done with the members of his old back-up band Crazy Horse, is a portrait of dark sentiments. The title cut, which both opens and closes the album, is about the death of one of Neil's friends, his equipment manager Bruce Berry, who died "out on the mainline". This sets the tenor for the entire work, much as "Tell Me Why", with its wistful romanticism set the stage for the tremoring beauty of After the Gold Rush. Tonight's the Night is, above all, an ugly album, much in the way that Lou Reed's Berlin was. The talent is evident, but the sentiments are so harsh that, on first listen, you feel you have to turn away. And many will not give the album a second chance. There are a few less alienating cuts, notably "New Mama", a "Borrowed Tune" (both very pretty) and "Speakin' Out", a slow blues reminiscent of Dylan's "Pledging My Time" and Clyde McPhatter's "A Lover' s Question" (Oh tell me where/the answer lies...) (McPhatter killed himself, if you remember.)

Fellow-Buffalo Stephen's first solo effort in quite a while comes across as much more accessible, as well as musically and lyrically superior. Stills has lost much of the power of his voice, but the sweetness is still there and is put to very good use in "As I Come of Age" and "Myth of Sisyphus". He too has been walking along the streets of disillusionment, but it has made him sad, not ugly. And this bittersweet mood is the veneer over a framework of some fairly steady and workable rock & roll. "Turn Back the Pages" and "First Things First" both have a bouncy reggae feel, and his version of Neil's "New Mama" is better than Neil's own. To me, the strongest cuts are "Love Story", which has nothing to do with the enzyme detergent death of Ali McGraw, and "Cold, Cold World", which has his best mix of words and music. The album restores Stills to a prominent position in popular music, just as Young's album may threaten his.