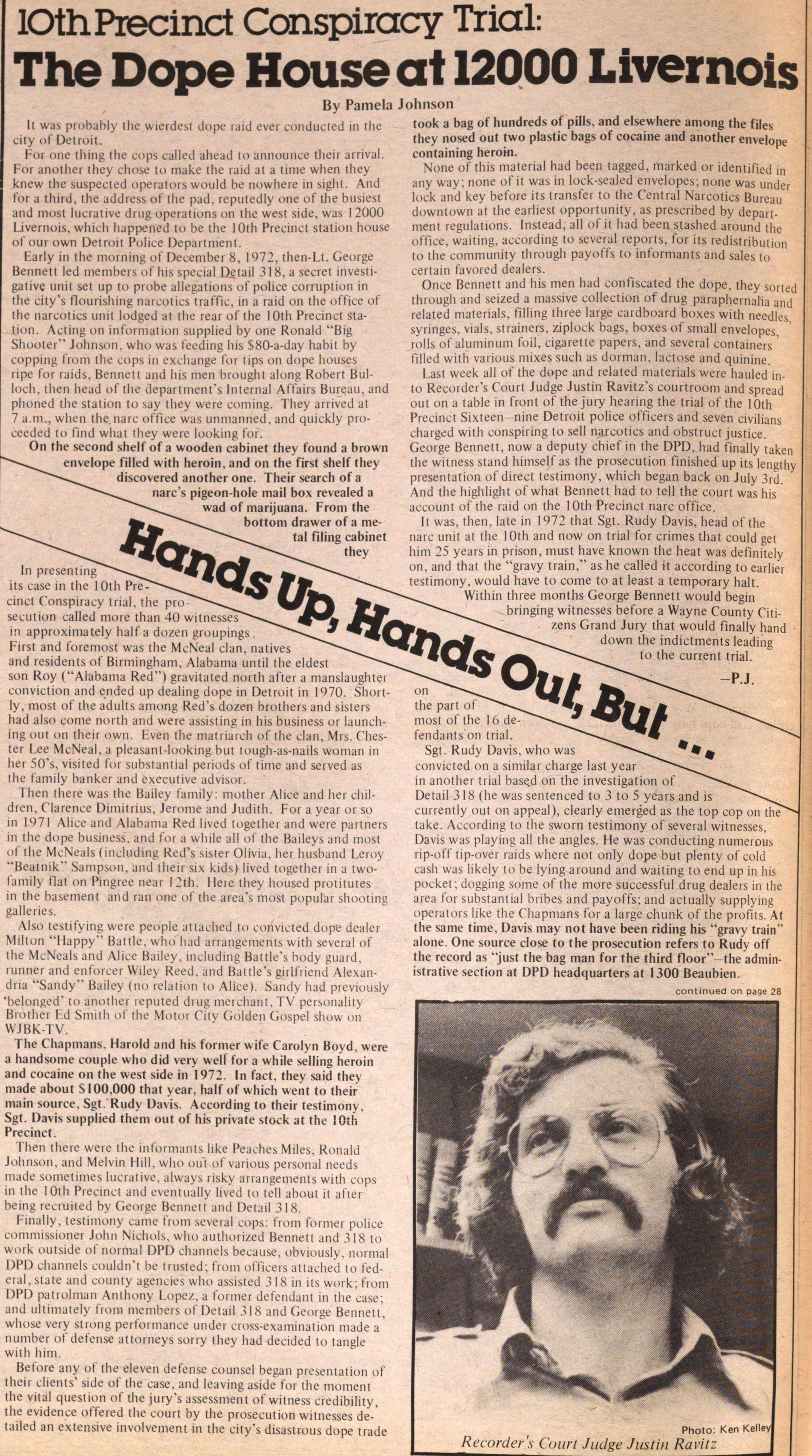 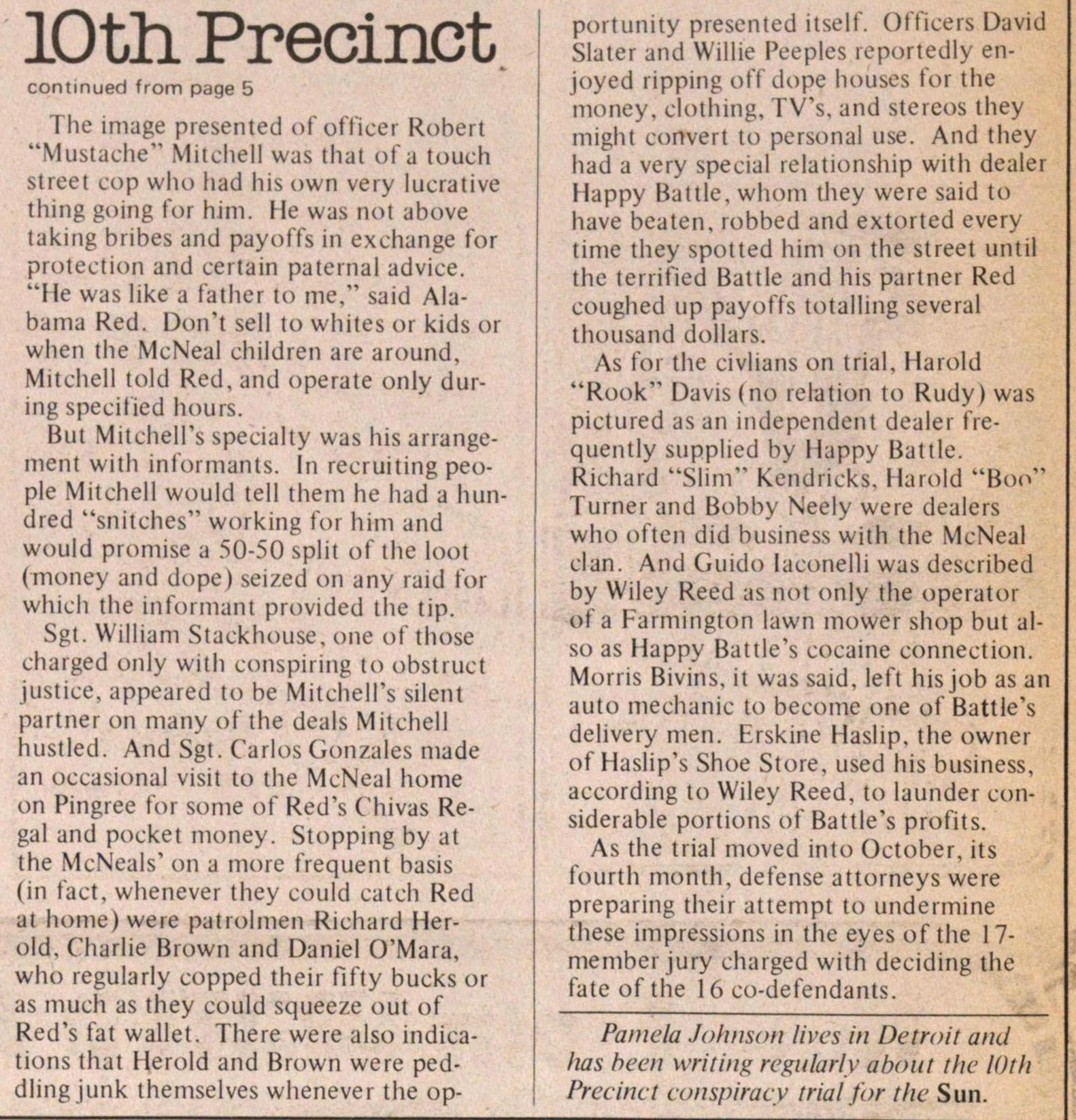 For one thing the cops called ahead to announce their arrival. For another they chose to make the raid at a time when they knew the suspected operators would be nowhere in sight. And for a third, the address of the pad, reputedly one of the busiest and most lucrative drug operations on the west side, was 12000 Livernois, which happened to be the 10th Precinct station house of our own Detroit Police Department.

Early in the morning of December 8, 1972, then-Lt. George Bennett led members of his special Detail 318, a secret investigative unit set up to probe allegations of police corruption in the city's flourishing narcotics traffic, in a raid on the office of the narcotics unit lodged at the rear of the 10th Precinct station. Acting on information supplied by one Ronald "Big Shooter" Johnson, who was feeding his $80-a-day habit by copping from the cops in exchange for tips on dope houses ripe for raids, Bennett and his men brought along Robert Bulloch, then head of the department's Internal Affairs Bureau, and phoned the station to say they were coming. They arrived at 7 a.m., when the narc office was unmanned, and quickly proceeded to find what they were looking for.

On the second shelf of a wooden cabinet they found a brown envelope filled with heroin, and on the first shelf they discovered another one. Their search of a narc's pigeon-hole mail box revealed a wad of marijuana. From the bottom drawer of a metal filing cabinet they took a bag of hundreds of pills, and elsewhere among the files they nosed out two plastic bags of cocaine and another envelope containing heroin.

None of this material had been tagged, marked or identified in any way; none of it was in lock-sealed envelopes; none was under lock and key before its transfer to the Central Narcotics Bureau downtown at the earliest opportunity, as prescribed by department regulations. Instead, all of it had been stashed around the office, waiting, according to several reports, for its redistribution to the community through payoffs to informants and sales to certain favored dealers.

Once Bennett and his men had confiscated the dope, they sorted through and seized a massive collection of drug paraphernalia and related materials, filling three large cardboard boxes with needles, syringes, vials, strainers, ziplock bags, boxes of small envelopes, rolls of aluminum foil, cigarette papers, and several containers filled with various mixes such as dorman, lactose and quinine.

Last week all of the dope and related materials were hauled into Recorder's Court Judge Justin Ravitz's courtroom and spread out on a table in front of the jury hearing the trial of the 10th Precinct Sixteen—nine Detroit police officers and seven civilians charged with conspiring to sell narcotics and obstruct justice. George Bennett, now a deputy chief in the DPD, had finally taken the witness stand himself as the prosecution finished up its lengthy presentation of direct testimony, which began back on July 3rd. And the highlight of what Bennett had to tell the court was his account of the raid on the 10th Precinct narc office.

It was, then, late in 1972 that Sgt. Rudy Davis, head of the narc unit at the 10th and now on trial for crimes that could get him 25 years in prison, must have known the heat was definitely on, and that the "gravy train," as he called it according to earlier testimony, would have to come to at least a temporary halt.

Within three months George Bennett would begin bringing witnesses before a Wayne County Citizens Grand Jury that would finally hand down the indictments leading to the current trial. —P.J.

In presenting its case in the 10th Precinct Conspiracy trial, the prosecution called more than 40 witnesses in approximately half a dozen groupings. First and foremost was the McNeal clan, natives and residents of Birmingham, Alabama until the eldest son Roy ("Alabama Red") gravitated north after a manslaughter conviction and ended up dealing dope in Detroit in 1970. Shortly, most of the adults among Red's dozen brothers and sisters had also come north and were assisting in his business or launching out on their own. Even the matriarch of the clan, Mrs. Chester Lee McNeal, a pleasant-looking but tough-as-nails woman in her 50's, visited for substantial periods of time and served as the family banker and executive advisor.

Then there was the Bailey family: mother Alice and her children, Clarence Dimitrius, Jerome and Judith. For a year or so in 1971 Alice and Alabama Red lived together and were partners in the dope business, and for a while all of the Baileys and most of the McNeals (including Red's sister Olivia, her husband Leroy "Beatnik" Sampson, and their six kids) lived together in a two-family flat on Pingree near 12th. Here they housed prostitutes in the basement and ran one of the area's most popular shooting galleries.

The Chapmans, Harold and his former wife Carolyn Boyd, were a handsome couple who did very well for a while selling heroin and cocaine on the west side in 1972. In fact, they said they made about $100,000 that year, half of which went to their main source, Sgt. Rudy Davis. According to their testimony, Sgt. Davis supplied them out of his private stock at the 10th Precinct.

Then there were the informants like Peaches Miles, Ronald Johnson, and Melvin Hill, who out of various personal needs made sometimes lucrative, always risky arrangements with cops in the 10th Precinct and eventually lived to tell about it after being recruited by George Bennett and Detail 318.

Finally, testimony came from several cops: from former police commissioner John Nichols, who authorized Bennett and 318 to work outside of normal DPD channels because, obviously, normal DPD channels couldn't be trusted; from officers attached to federal, state and county agencies who assisted 318 in its work; from DPD patrolman Anthony Lopez, a former defendant in the case; and ultimately from members of Detail 318 and George Bennett, whose very strong performance under cross-examination made a number of defense attorneys sorry they had decided to tangle with him.

Before any of the eleven defense counsel began presentation of their clients' side of the case, and leaving aside for the moment the vital question of the jury's assessment of witness credibility, the evidence offered the court by the prosecution witnesses detailed an extensive involvement in the city's disastrous dope trade on the part of most of the 16 defendants on trial.

Sgt. Rudy Davis, who was convicted on a similar charge last year in another trial based on the investigation of Detail 318 (he was sentenced to 3 to 5 years and is currently out on appeal), clearly emerged as the top cop on the take. According to the sworn testimony of several witnesses, Davis was playing all the angles. He was conducting numerous rip-off tip-over raids where not only dope but plenty of cold cash was likely to be lying around and waiting to end up in his pocket; dogging some of the more successful drug dealers in the area for substantial bribes and payoffs; and actually supplying operators like the Chapmans for a large chunk of the profits. At the same time, Davis may not have been riding his "gravy train" alone. One source close to the prosecution refers to Rudy off the record as "just the bag man for the third floor"—the administrative section at DPD headquarters at 1300 Beaubien.

The image presented of officer Robert "Mustache" Mitchell was that of a tough street cop who had his own very lucrative thing going for him. He was not above taking bribes and payoffs in exchange for protection and certain paternal advice. "He was like a father to me," said Alabama Red. Don't sell to whites or kids or when the McNeal children are around, Mitchell told Red, and operate only during specified hours.

But Mitchell's specialty was his arrangement with informants. In recruiting people Mitchell would tell them he had a hundred "snitches" working for him and would promise a 50-50 split of the loot (money and dope) seized on any raid for which the informant provided the tip.

Sgt. William Stackhouse, one of those charged only with conspiring to obstruct justice, appeared to be Mitchell's silent partner on many of the deals Mitchell hustled. And Sgt. Carlos Gonzales made an occasional visit to the McNeal home on Pingree for some of Red's Chivas Regal and pocket money. Stopping by at the McNeals' on a more frequent basis (in fact, whenever they could catch Red at home) were patrolmen Richard Herold, Charlie Brown and Daniel O'Mara, who regularly copped their fifty bucks or as much as they could squeeze out of Red's fat wallet. There were also indications that Herold and Brown were peddling junk themselves whenever the opportunity presented itself. Officers David Slater and Willie Peeples reportedly enjoyed ripping off dope houses for the money, clothing, TV's, and stereos they might convert to personal use. And they had a very special relationship with dealer Happy Battle, whom they were said to have beaten, robbed and extorted every time they spotted him on the street until the terrified Battle and his partner Red coughed up payoffs totalling several thousand dollars.

As for the civilians on trial, Harold "Rook" Davis (no relation to Rudy) was pictured as an independent dealer frequently supplied by Happy Battle. Richard "Slim" Kendricks, Harold "Boo" Turner and Bobby Neely were dealers who often did business with the McNeal clan. And Guido Iaconelli was described by Wiley Reed as not only the operator of a Farmington lawn mower shop but also as Happy Battle's cocaine connection. Morris Bivins, it was said, left his job as an auto mechanic to become one of Battle's delivery men. Erskine Haslip, the owner of Haslip's Shoe Store, used his business, according to Wiley Reed, to launder considerable portions of Battle's profits.

As the trial moved into October, its fourth month, defense attorneys were preparing their attempt to undermine these impressions in the eyes of the 17-member jury charged with deciding the fate of the 16 co-defendants.

Pamela Johnson lives in Detroit and has been writing regularly about the 10th Precinct conspiracy trial for the Sun.