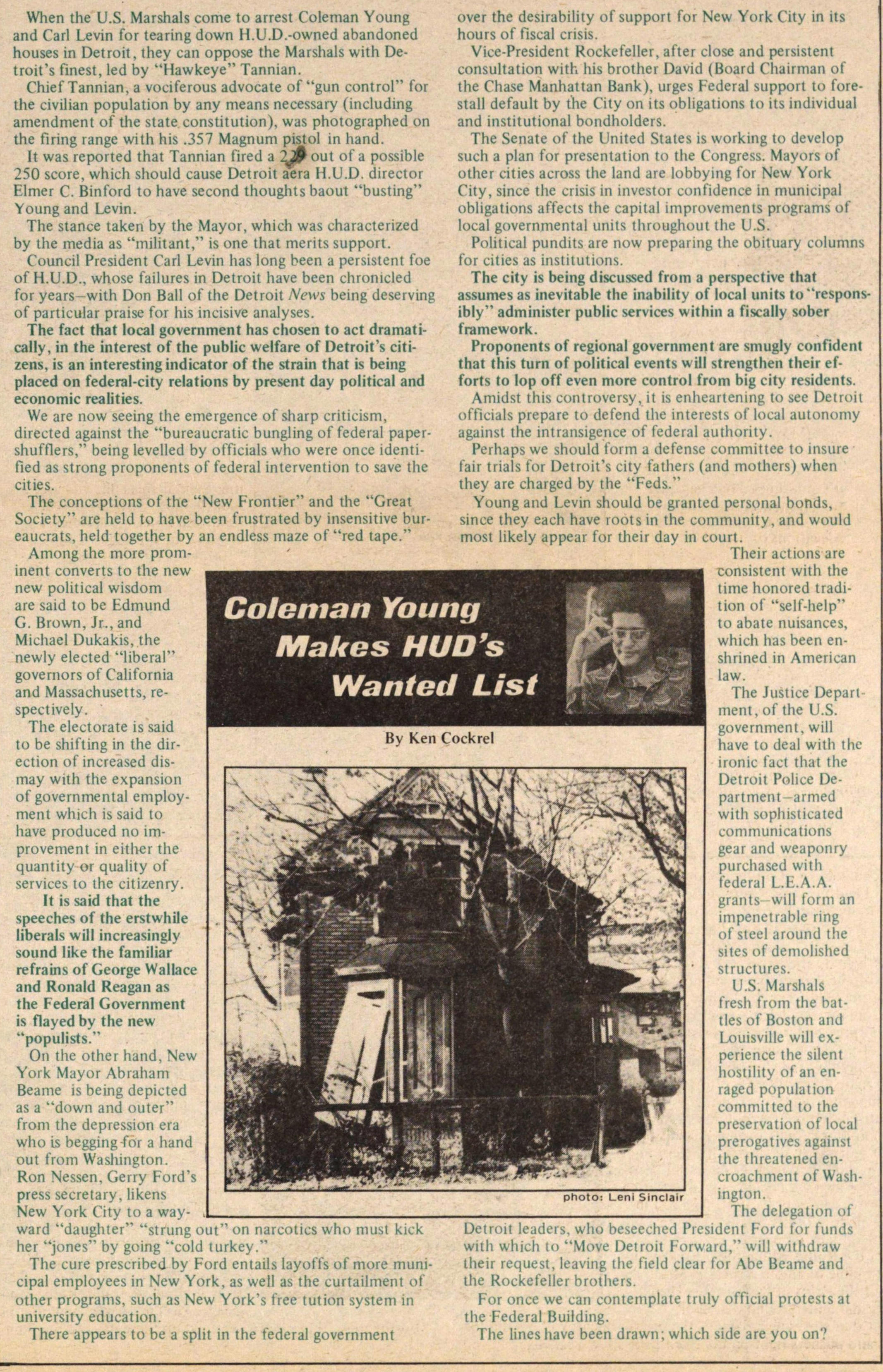 When the U.S. Marshals come to arrest Coleman Young and Cari Levin for tearing down H.U.D.-owned abandoned houses in Detroit, they can oppose the Marshals with Detroit's finest, led by "Hawkeye" Tannian.

Chief Tannian, a vociferous advocate of "gun control" tor the civilian population by any means necessary (including amendment of the state constitution), was photographed on the firing range with his .357 Magnum pistol in hand.

It was reported that Tannian fired a 229 out of a possible 250 score, which should cause Detroit area H.U.D. director Elmer C. Binford to have second thoughts about "busting" Young and Levin.

The stance taken by the Mayor, which was characterized by the media as "militant," is one that merits support. Council President Carl Levin has long been a persistent foe of H.U.D. , whose failures in Detroit have been chronicled for years-with Don Ball of the Detroit News being deserving of particular praise for his incisive analyses.

The fact that local government has chosen to act dramatically, in the interest of the public welfare of Detroit's citizens, is an interesting indicator of the strain that is being placed on federal-city relations by present day political and economic realities.

We are now seeing the emergence of sharp criticism, directed against the "bureaucratic bungling of federal paper shufflers," being leveled by officials who were once identified as strong proponents of federal intervention to save the cities.

The conceptions of the "New Frontier" and the "Great Society" are held to have been frustrated by insensitive bureaucrats, held together by an endless maze of "red tape."

Among the more prominent converts to the new new political wisdom are said to be Edmund G. Brown, Jr., and Michael Dukakis, the newly elected "liberal" governors of California and Massachusetts, respectively.

The electorate is said to be shifting in the direction of increased dismay with the expansion of governmental employment which is said to have produced no improvement in either the quantity or quality of services to the citizenry.

It is said that the speeches of the erstwhile liberals will increasingly sound like the familiar refrains of George Wallace and Ronald Reagan as the Federal Government is flayed by the new "populists."

On the other hand, New York Mayor Abraham Beame is being depicted as a "down and outer" from the depression era who is begging-for a hand out from Washington. Ron Nessen, Gerry Ford's press secretary, likens New York City to a ward "daughter" "strung out" on narcotics who must kick her "jones" by going "cold turkey."

The cure prescribed by Ford entails layoffs of more municipal employees in New York, as well as the curtailment of other programs, such as New York's free tuition system in university education.

There appears to be a split in the federal government over the desirability of support for New York City in its hours of fiscal crisis.

Vice-President Rockefeller, after close and persistent consultation with his brother David (Board Chairman of the Chase Manhattan Bank), urges Federal support to forestall default by the City on its obligations to its individual and institutional bondholders.

The Senate of the United States is working to develop such a plan for presentation to the Congress. Mayors of other cities across the land are lobbying for New York City, since the crisis in investor confidence in municipal obligations affects the capital improvements programs of local governmental units throughout the U.S.

Political pundits are now preparing the obituary columns for cities as institutions.

The city is being discussed from a perspective that assumes as inevitable the inability of local units to"responsibly " administer public services within a fiscally sober framework.

Proponents of regional government are smugly confident that this turn of political events will strengthen their efforts to lop off even more control from big city residents.

Amidst this controversy, it is enheartening to see Detroit officials prepare to defend the interests of local autonomy against the intransigence of federal authority.

Perhaps we should form a defense committee to insure fair trials for Detroit's city fathers (and mothers) when they are charged by the "Feds."

Young and Levin should be granted personal bonds, since they each have roots in the community, and would most likely appear for their day in court.

Their actions are consistent with the time honored tradition of "self-help" to abate nuisances, which has been enshrined in American law.

The Justice Department, of the U.S. government. will have to deal with the ironic fact that the Detroit Police Department-armed with sophisticated Communications gear and weaponry purchased with federal L.E.A.A. grants will form an impenetrable ring of steel around the sites of demolished structures.

U.S. Marshals fresh from the battles of Boston and Louisville will experience tlie silent hostility of an enraged population committed to the preservation of local prerogatives against the threatened encroachment of Washington.

The delegation of Detroit leaders, who beseeched President Ford for funds with which lo "Move Detroit Forward," will withdraw their request, leaving the field clear for Abe Beume and the Rockefeller brothers.

For once we can contemplate truly official protests at the Federal Building.

The lines have been drawn; which side are you on?