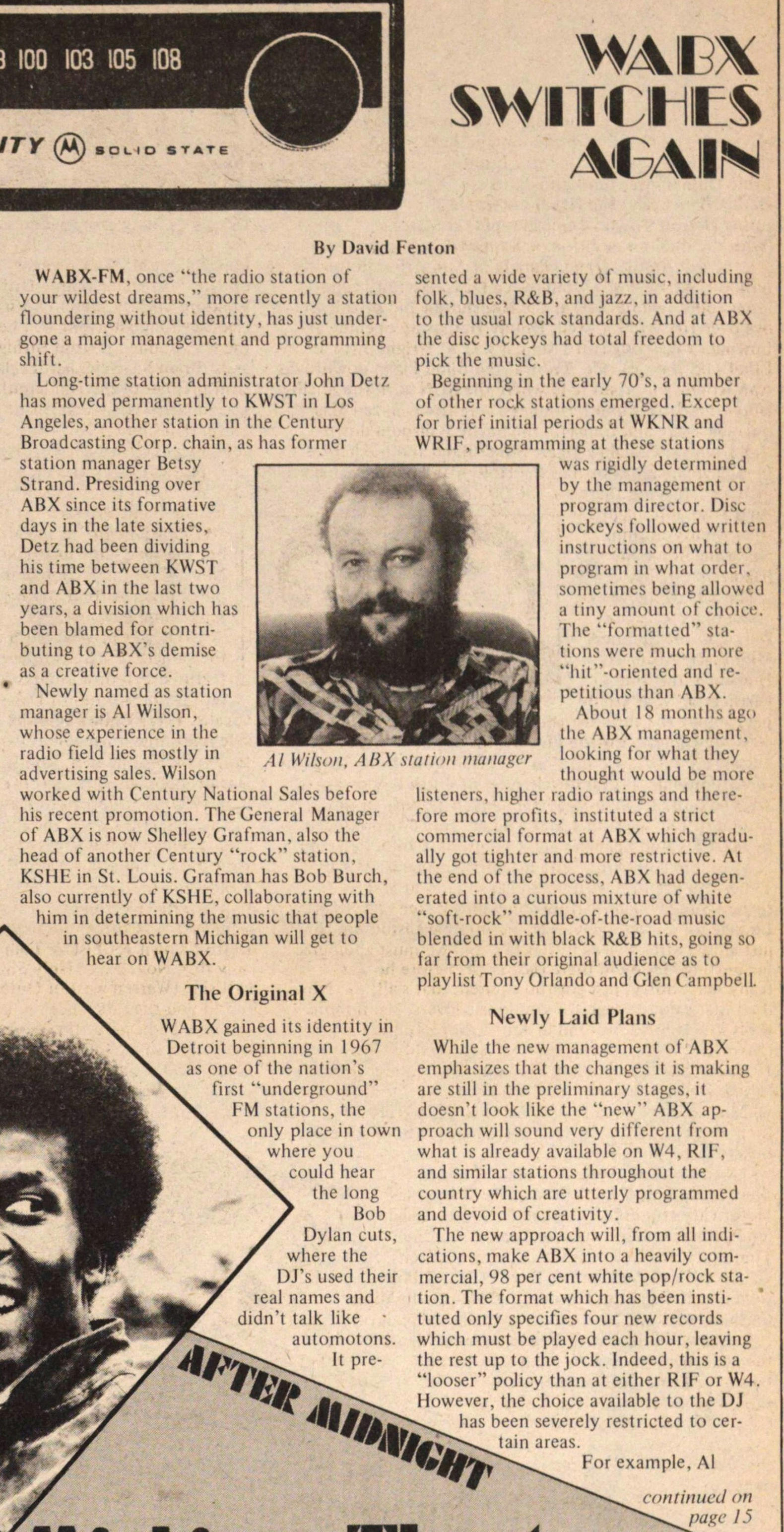 WABX-FM, once "the radio station of your wildest dreams." more recently g station floundering without identity. hasjust undergone a major management aml programming shift. Long-time station administrator .lohn Detz has moved peimanently to KWST in Los Angeles, anothet station in the ('entury Broadcasting Corp. chain, as has former station manager Betsy Strand. Presiding over ABX since its formative days in the late sixtics. Detz had been dividing his time between KWST and ABX in the last two years, a división which luis been blamed for contributing to ABX's demise as a creative forcé. Newly named as slation manager is Al Wilson. whose experience in the radio field lies mostly in advertisine sales. Wilson worked witli Centiiry National Sales before his recent promotion. The General Managei of ABX is now Shelley Grafman. alst the head of another Century "rock" station. KSHE in St. Louis. Grafman has Bob Burch, also currenily of KSHb, collaborating with him in determining the music that people V in southeastern Michigan will get to N. liear on WABX. The Original X WABX gained its identity in Detroit beginning in 1967 as one of the nation's first "underground" FM stations, the V only place in town where you w could hear X the long y Bob f Dylan cuts, X wliere the DJ's used their real ñames and didn't talk like automotons. It sented a wide variety of mude, índuding folk, blues. R&B, and ja, in addjtion (o the usual rock standards. And al ABX the disc jockeys had total treedoin to piek the musK. Bepinnmg in the early 7()'s. a nuniliei ofothei nul stations emerged. Except for brief initial periods at WKNR and WRIK, orogrammina at these stations w.is rigidly determinèd by the management or program director. Disc jockeys followed written instructiohs cm what u program in what order, sometimes being allowcd a liny amounl of choice. I he "fortnatted" sialions much more "liit"-uriented and repetUious tfaan ABX. lumi 1 8 months ago the BX management, looking lor what they tliouulii wonlil he more listencrs. higher radio ratings and therefore more profits, instituted ;i Wrid commercial formal al ABX wliich gradually gut tighier and more restrictive. At the end of the procese, AliX luid degenerated into a curíous mixture of white "soft-rock" middle-of-the-road music blended in witli black R&B hits, going so far froitl their original audience as (o playlist Tony Orlando and Glen Campbell. Newly Laid Plans While the new management ot ABX empliasies iliat the changes il is making are still in the preliminary stages, il doesn't look like the "new" ABX approacli will sound very different f'iom what is already available on W4. Ril', and similar stations tliroughout the country wliich are utterly programmed and devoid of creativity. The new approach will, from all indications, make ABX into a heavily commercial, 98 per cent white poprock station. The format which has been instituted only specifies four new records which must be played cach hour, leaving the rest up to the jock. Indeed, this is a "looser" policy than at either RIF or W4. llowever. the choice available to the DJ has been severely restricted to tam ureas. For example, Al continued on WMdA amtinued front page 13 Wilson told us that at present, ABX is playing no Motown, R&B oldies, Stevie Wonder, Marvin Gaye, or Earth, Wind and Fire; no O'Jays, no Isley Brothers, absolutely no jazz- in fact, no black music whatsoever, although Wilson offered that a tew of the above were being "considered." Aretha Franklin won't be heard urging the DJ to "hang on in there" on ABX- she's out. When pressed on how ABX will differ from the other FM rock stations, Wilson mentioned that the X would be playing complete album sides and will also engage in "block" programming, meaning three or four tunes by one artist in a row. In one other important aspect, ABX wül be exactly like W4 and most other rock stations-it will have no news department whatsoever. News was at one lime a hallmark of the-ABX approach. Now disc jockeys will read wire service reports, but will do no independent reporting nor any of local origin which doesn't hit the wires. The special audio reports, features, in-depths, etc, formerly offered by the station's now discharged Cindy Felong, are out. Wilson did say that the X was planning several public af fairs programs. PROMISES, PROMISES When interviewed by this reporter two months ago, former ABX General Manager John Detz told us that the station couldn't hope to survive by duplicating the basic approach of the two big Detroit área rock stations, W4 and RIF. Detz told us that the X would be gradually adding more rhythm & blues, some commercial jazz, and more varieties of older music. Apparently Century Broadcasting did a turn-around on Detz's promises, because ABX is doing none of the above, and is instead trying to compete with the two big rock stations in town by being essentially the same. Meanwhile, the audience still hungry for a meaningfulindeed fusion-music station has almost nowhere to turn. At a time when black music is selling like crazy to white people, when the distinction between jazz, rock and R&B is fusing into a popular contemporary form, ABX is refusing to budge. THE RATING GAME Radio ratings, produced with somewhat randoni sampling methods by national rating companies, determine those stations with which advertisers will spend their money, thereby maintaining a grip on the programming policies of commercial radio throughout the U.S. "Ratings are the name of the game," as Wilson told us. There is a quarterly "rating period" going on in Detroit right now. lf ABX does not do well in this rating and the next one. you can be sure there'll be another shift in programming philosophy at Century Broadcasting. But probably the direction of a more intelligent, sophisticated, well-blended black-music approach, coupled with an informational perspective, will remain untouchable.