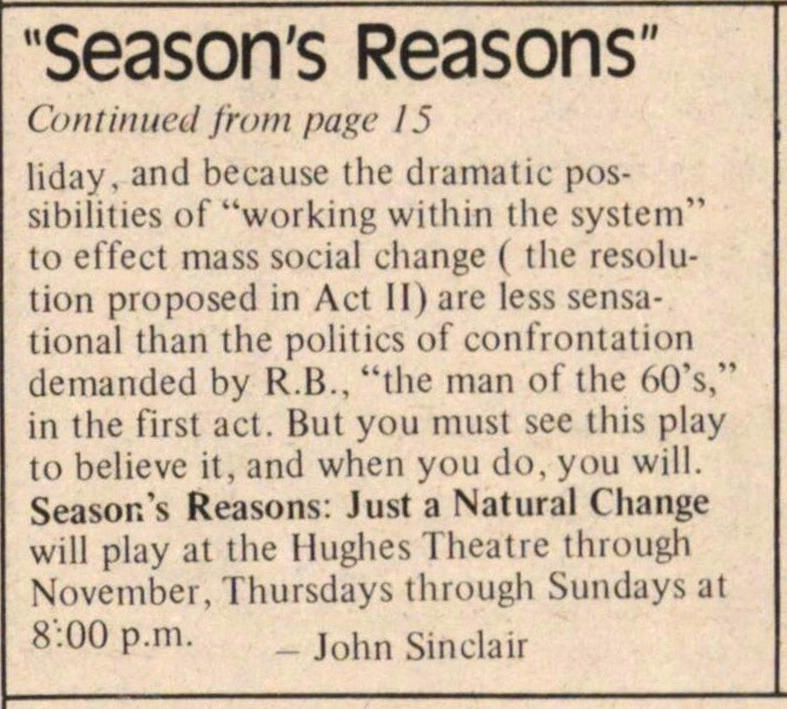 Just A Natural Change. The Spirit o) Shango Theatre Company in the World Premier ii Ron Milinr's new musical at the Langston Hughes Theatre, Directed by Ri Milner. Music by Charles Masón, Choreograpky by Penny Godboldo. Opened October ISth. Detroit's Ron Milner. l'or this ohserver ilie mosi exciting playwñgh) working m theajre today. has tufned lus dramatic genius o the efeation, with Musical Directo] (luirles Masón, ot' an a capella black musical. Season's Reasons. whicli has just made its World Premier at the new l angston Hughes Phealre. Baácally the story of a young black militant of the 60's who has escapee) trom prison io return to the st reets of ll75 and the drastically different politica! climate al Kand,Sestoa't Reasons dramaticall) exanv nes the changes in conscioüiik-ss and activüj which imo altered iht course oí Mc in the black communities of A merica. Thai n makes t lus examination through song foi Season's Reasons is firsl of all a musical in the grand tradition -■ speaks even mort eloquently of Milner's theatrjcal talenl and hii ahility to intégrate (lie elements ut' lus art witli the lile of the streets. Unlike pop musicals Snsous Reasons bimus mto tocus and attempts to deal réalistically willi questions of everyday lite foi black people and anyone witli any sense in the U.S. of A. Thus it not only makes for exeiting theat te thrilling lar beyonil the scope of fantas) 01 byhical decadence, bul il also helps restore drama to its rightful place as a function of real lite. The tii s t act of Season's Reasons . as a result. carnes au impact which is impossible to effect through the usual tlieitrical arlilïce; one is lelt nol only with a poweiful dramatic experience, but with powerful thoughts and feelings which relate directly to the most urgent questions of life. There are a huridred things I would like to say about Season's Reasons, but space limitations keep me frorn mentioning more than the allaround excellence and the incredible spirit of the cast; the Stunning musical and dramatic quality of Charles Mason's compositions; the suitability of the Langston Mugltes Thcatre as the setting for the play; and the courage and brilliancc of Milner's concept ion ol both the content and the form of this play. f the second act seems somewhat anti-cliniactic (and woik is still being done on it from performance to performance, to whip it into,finaj shape while it's still playing at the Hughes), it's only bccause the first act would be hard to follow with John C'oltrane. Duke Hllington and Billie llolcontittued dii page 2'J "Season's Reasons " Continued from page 15 liday. and because the dramatic possibilities of "working within the system" to effect mass social cliange ( the resolution proposed in Act II) are less sensational than the politics of confrontation demanded by R.B., '"the man of the 60's," in the first act. But you must see this play to believe it, and when you do, you will. Season's Reasons: Just a Natural Cliange will play at the Hughes Theatrc through November, Thursdays through Sundays at 8:00 p.m. _ John sincair