Editorial: The Rules Of The Game 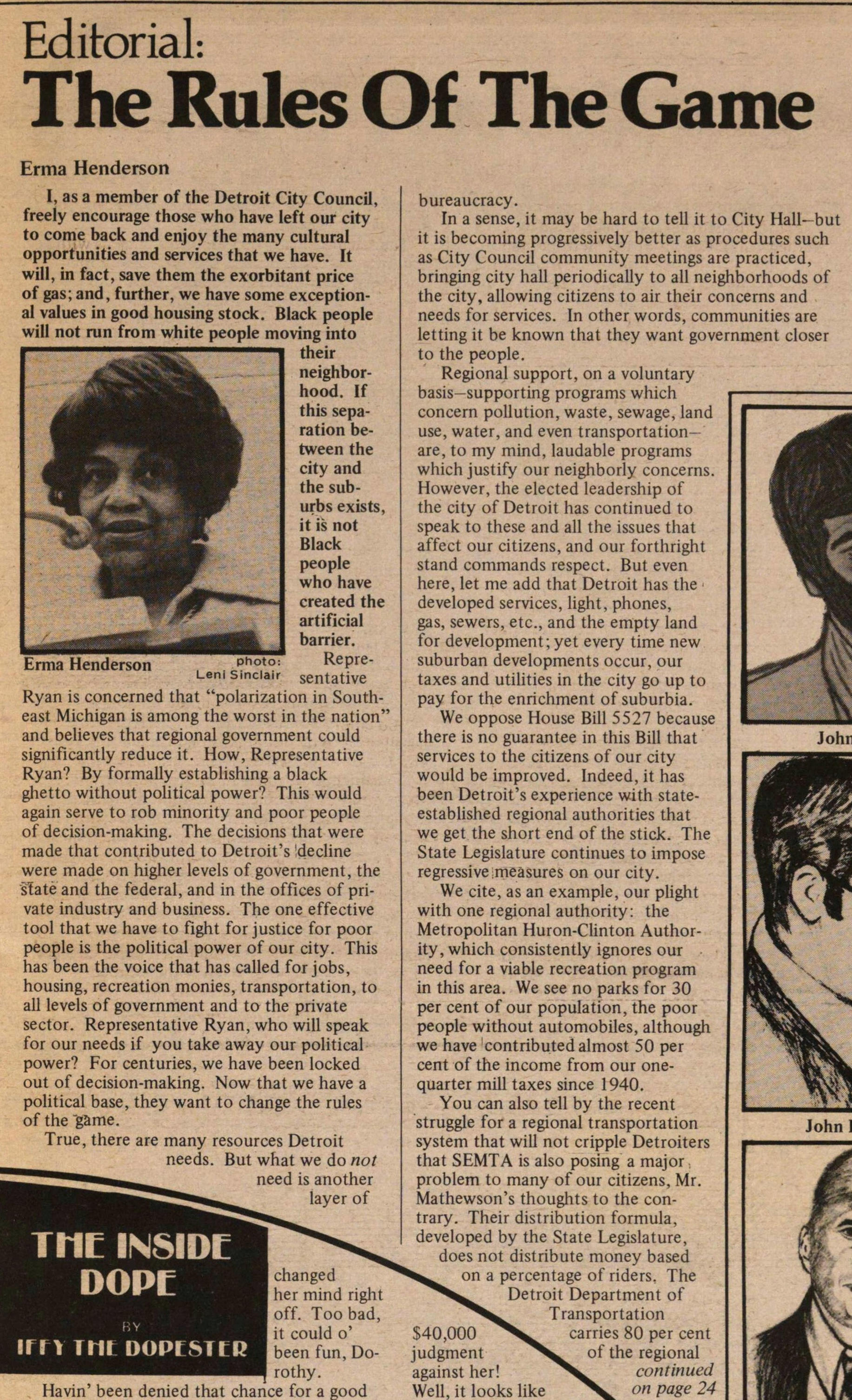 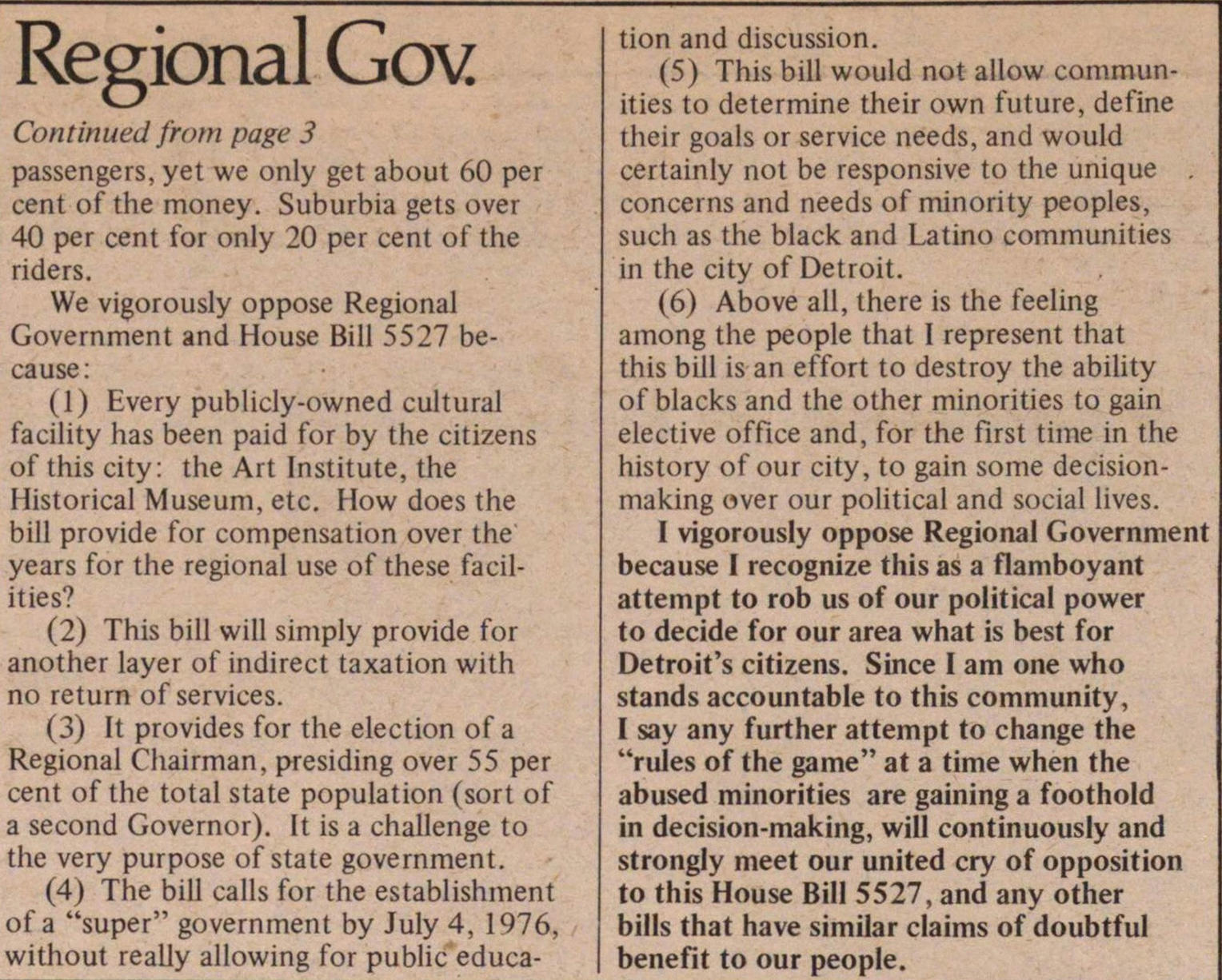 Erma Henderson I, as a member of the Detroit City Council, freely encourage those who have Ieft our city to come back and enjoy the many cultural opportunities and services that we have. lt will, in fact, save them the exorbitant price of gas; and, further, we have some exceptional values in good housing stock. Black people will not run from white people moving into their neighborhood. If this separation between the city and the suburbs exists, it is not Black people who have created the artificial banier. Representative Ryan is concerned that "polarization in Southeast Michigan is among the worst in the nation" and believes that regional government could significantly reduce it. How, Representative Ryan? By formally establishing a black ghetto without political power? This would again serve to rob minority and poor people of decision-making. The decisions that were made that contributed to Detroit's 'decline were made on higher levéis of government, the state and the federal, and in the offices of private industry and business. The one effective tooi that we have to fight for justice for poor people is the political power of our city. This has been the voice that has called for jobs, housing, recreation monies, transportation, to all levéis of government and to the private sector. Representative Ryan, who will speak for our needs if you take away our political power? For centuries, we have been locked out of decision-making. Now that we have a political base, they want to change the rules of the "game. True, there are many resources Detroit needs. But what we do not need is another layer of bureaucracy. In a sense, it may be hard to teil it to City Hall- but it is becoming progressively better as procedures such as City Council community meetings are practiced, bringing city hall periodically to all neighborhoods of the city, allowing citizens to air their concerns and needs for services. In other words, communities are letting it be known that they want government closer to the peoDle. Regional support, on a voluntary basis- supporting programs which concern pollution, waste, sewage, land use, water, and even transportaron- are, to my mind, laudable programs which justify our neighborly concerns. However, the elected leadership of the city of Detroit has continued to speak to these and all the issues that affect our citizens, and our forthright stand commands respect. But even here, let me add that Detroit has the developed services, light, phones, gas, sewers, etc, and the empty land for development; yet every time new suburban developments occur, our taxes and Utilities in the city go up to pay for the enrichment of suburbia. We oppose House Bill 5527 because there is no guarantee in this Bill that services to the citizens of our city would be improved. Indeed, it has been Detroit's experience with stateestablished regional authorities that we get the short end of the stick. The State Legislature continúes to impose regressive measures on our city. We cite, as an example, our plight with one regional authority: the Metropolitan Huron-Clinton Authority, which consistently ignores our need for a viable recreation program in this area. We see no parks for 30 per cent of our population, the poor people without automobiles, although we have contributedalmost 50 per cent of the income from our onequarter mili taxes since 1940. You can also teil by the recent struggle for a regional transportation system that will not cripple Detroiters that SEMTA is also posing a major problem to many of our citizens, Mr. Mathewson's thoughts to the contrary. Their distribution formula, developed by the State Legislature, does not distribute money based on a percentage of riders, The Detroit DeDartment of Transportation carnes 80 per cent of the regional V continued on page 24 Regional Gov Continued from page 3 passengers, yet we only get about 60 per cent of the money. Suburbia gets over 40 per cent for only 20 per cent of the riders. We vigorously oppose Regional Government and House Bill 5527 because : (1) Every publicly-owned cultural facility has been paid for by the citizens of this city: the Art Institute, the Historical Museum, etc. How does the bilí provide for compensation over the years for the regional use of these facilities? (2) This bilí will simply provide for another layer of indirect taxation with no return of services. (3) It provides for the election of a Regional Chairman, presiding over 55 per cent of the total state population (sort of a second Governor). It is a challenge to the very purpose of state government. (4) The bilí calis for the establishment of a "super" government by July 4, 1976, without really allowing for public tion and discussion. (5) This bilí would not allow communities to determine their own future, define their goals or service needs, and would certainly not be responsive to the unique . concerns and needs of minority peoples, such as the black and Latino communities in the city of Detroit. (6) Above all, there is the feeling among the people that I represent that this bill is an effort to destroy the ability of blacks and the other minorities to gain elective office and, for the first time in the history of our city, to gain some decisionmaking over our political and social lives. I vigorously oppose Regional Government because I recognize this as a flamboyant attempt to rob us of our political power to decide for our area what is best for Detroit's citizens. Since I am one who stands accountable to this community, I say any further attempt to change the "rules of the game" at a time when the abused minorities are gaining a foothold in decision-making, will continuously and strongly meet our united cry of opposition to this House Bill 5527, and any other bilis that have similar claims of doubtful benefit to our people.