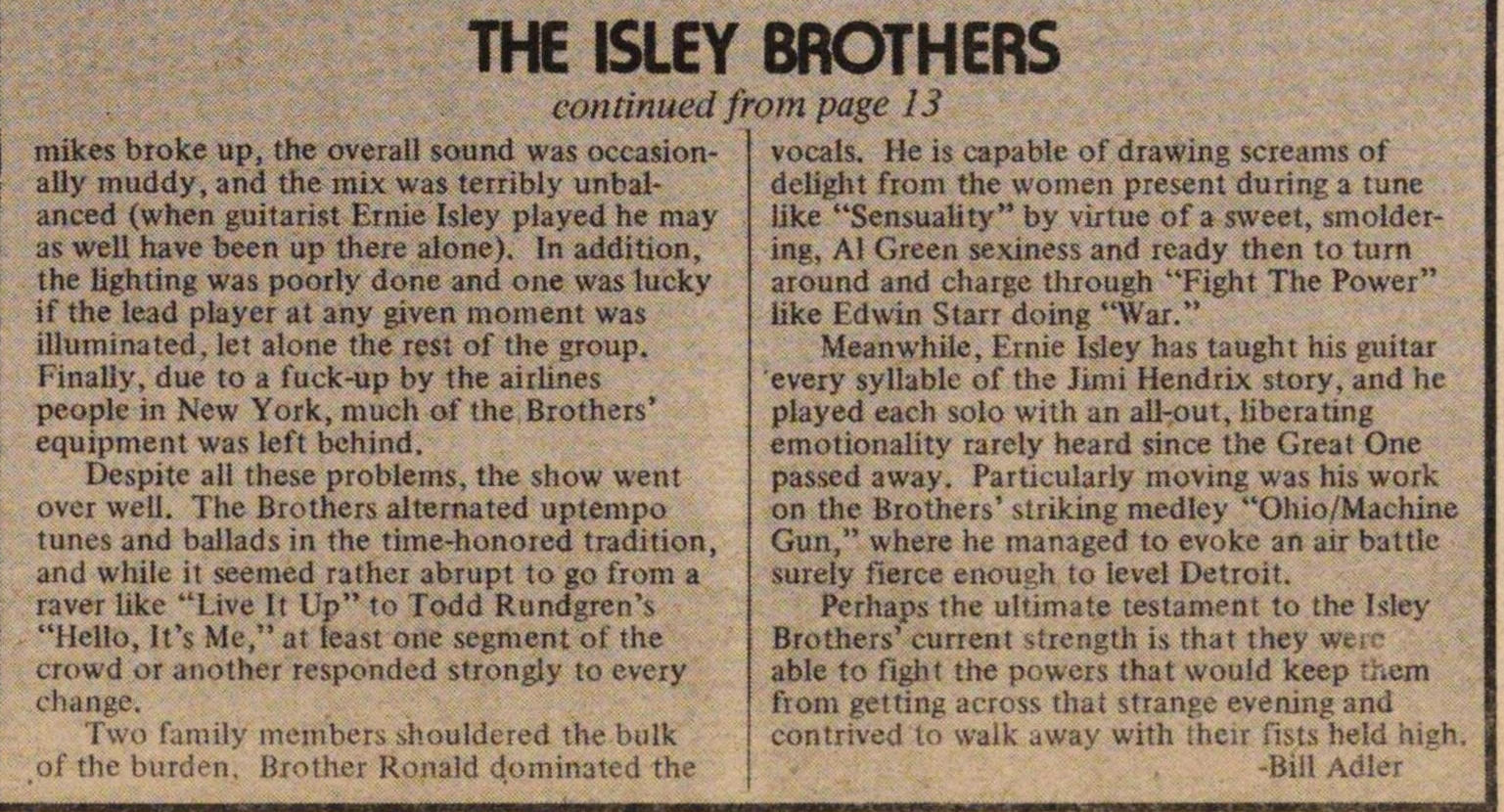 Apart trom the testimony provided by an enduring musical legacy that spans a decade and a half and includes hits the stature of "Shout," "Twist and Shout," "This Old Heart of Mine," and "It's Your Thing," proof of the Isley Brothers' musical capabilities is glowingly demonstrated on every cut of their latest album "Thé Heat Is On." The six-man team cooperatively writes, arranges, and produces theii material and stage act themselves and with a sureness and expertise bom of long experience. So one has to look elsewhere for the erratic, not to say weird, aspects of the Brothers' show at Olympia on Friday, Nov. 14. The obvious first place to look is to the peoplc behind this "Disco Happening." While there's no question that the Isleys are as hot as they've ever been, and that they filled Cobo Hall this past summer, still these producers might have exercised some caution before booking (in line with a trend moving many pop producers) this larger hall. Advance publicity was relatively scant and the 16,000-capacity facility was scarcely half-full. The problems of good sound in that terrible old cavern are another prodigious stumbling block, and although groups like Elton John and the Spinners did a remarkablejob taming the acoustics there, The Isleys suffered. Vocal continue J on page 15 THE ISLEY BROTHERS continued from page 13 mikes bioke up, the overall sound was occasionally muddy, and the mix was terribly unbalanced (when guitarist Ernie Isley played he may as well have been up there alone). In addition, the lighting was poorly done and one was lucky if the lead player at any given moment was illuminated. let alone the rest of the group. Finally, due to a fuck-up by the airünes people in New York, much af the Brothers' equipment was left bchind. Dcspitc all these problems, the show went over well. The Brothers alternated uptempo tunes and ballads in the time-honored tradition, and while it seemed ralhor abrupt to go from a raver like "Uve It Up" to Todd Rundgren's "Helio, lt's Me," at least one segment of the crowd or another responded strongly to every change. Two f.iniily members shouldered the bulk ot' the burcit-n. Brother Ronald dominatcd the vocals. He is capable of drawing screams of deliglit from the women present during a tune like "Sensuality" by vixtue of a sweet, smoldering. Al Green sexiness and ready then to turn around and charge through "Fight The Power" like Edwin Starr doing "War." Meanwhile, Ernie Isley has taught his guitar every syllable of the Jimi Hendrix story, and he played each solo with an all-out, libera ting emotionality rarely heard since the Great One passed away. Particularly moving was his work on the Brothers' striking medley "OhioMachine Gun," where he managed to evoke an air battlc surely fierce enough to level Detroit. Pcrhaps the ultímate testament to the Isley Brothers' current strength is that they v able to figlit the powers that would keep tiiem ftom getting across that strange evening :md i contrived to walk uway with Ihcir fists held 'meh, -Bill Adler